From the start they were never less than spellbinding.

Well, this is a couple of firsts for me tonight; first time at this venue (even though I've lived in the Manchester area all my life) and the first time I've seen a band not knowing any of the material. I'd heard of Clutch, but their music, for some reason, has kind of passed me by.

A sign on the door of the venue stated "No Crowdsurfing", I think more to do with health and safety than trying to curtail anyone's enjoyment of the gig. Regardless, I'm a bit long in the tooth for any of that and I'm here with an open mind and receptive ears.

I want to add a quick shout out to the support acts on this, the last night of the European tour. Lionize started off proceedings, their sound of Hammond-infused Heavy Rock went down very well, so much so I will be checking them out in more detail in the near future. Valient Thorr, whilst not my cup of tea musically, gave an energetic performance (to the extent I felt like I'd had a thirty minute workout) that went down very well with the capacity crowd.

Clutch arrived on stage to the sound of 'We Need Money', an intro that I assumed was a familiar to the regular fans as everyone seemed to sing along with it, before they fired things up properly with 'Cyborg Bette'. From the start they were never less than spellbinding. Tim Sults on guitar and the rhythm section of Dan Maine on bass and Jean-Paul Gaster on drums provided the musical soundscape for Neil Fallon's growl of a voice, it was unassuming at first until he prowled the stage and drew you in. You couldn't take your eyes off of him, like a travelling preacher man of old he pointed to the crowd as if he was performing on a one to one basis. 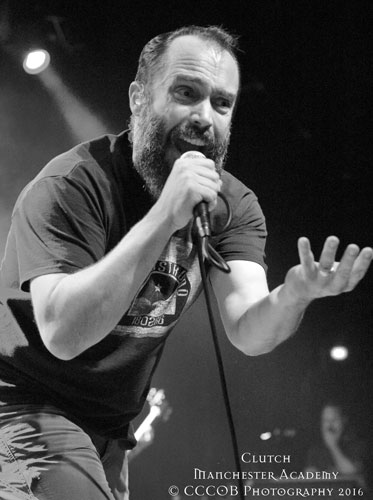 Second song 'Decapitation Blues', from their most recent release 'Psychic Warfare', had a couple of false starts due to guitar string breakage, but for a band in their twenty-fifth year this was nothing. Sults even mentioned in the encore, when it happened again, that they'd had more string breakages tonight than on the whole tour.

Over half of tonight's set was from their last two releases (I'm led to believe) and, I don't doubt for a second, are some of the best work they've done. 'Psychic Warfare' has been out for over a year now and the fans knew the lyrics by heart and sang along enthusiastically. Doing some homework, Clutch changed their set-list around so you never get the same set twice, but I don't think anyone went home disappointed.

Highlights included the ZZ Top-esque 'A Quick Death In Texas', which included the line "please forgive me Mr Gibbons", and Chris Brooks from Lionize on keyboards for '10001110101' alongside the crowd interaction on 'Earth Rocker', and 'D.C. Sound Attack' with its harmonica and cowbell.

With the inevitable encore, the Southern Rock style 'Electric Worry' and the 'Psychic Warfare' offering 'X-Ray Visions', the fans emptied into the night eagerly awaiting album number twelve and subsequent tour, myself included. I now have to go and purchase the back catalogue.

Oh, for the record, I counted three people who ignored the previously mentioned sign on the door and they were indeed ejected.