This was the first time I had ever visited the Symphony Hall. The venue was quite plush and there were good views all around. However, the first thing I noticed was that the hall was not sold-out with quite a few spare seats dotted all over.

First up tonight was ex-Scorpions guitarist Uli Jon Roth, who I had recently seen just before Christmas at the somewhat smaller Sheffield Corporation. This place was a little bigger than that and I noticed quite quickly that Roth sounded much better tonight than he did before Christmas. The thing was, he only played for around forty minutes, which was a bit of a disappointment. All but one of his band were different from the last time, the only guy he retained, and who was playing bass last time, was Niklas Turmann. The set was dominated by Scorpions songs rather than his solo stuff. 'We'll Burn The Sky' was played as a tribute to Uli's brother Zeno (who passed away earlier this year) with his picture and the years he was with us projected onto the stage-wide screen behind them, which was a nice and moving touch. He also played the instantly recognisable 'The Sails Of Charon' but the only truly Roth track was opener 'Sky Overture'. Of course, there was a sequence of "overthetopness" which is something that most virtuoso guitarists suffer from and which I rate with the "widdleometer". Everybody seemed to enjoy his set and Roth's music lent itself to the larger arena, although there was quite a bit of widdle and some heavy torturing of the whammy bar which resulted in a widdleometer reading of seven. 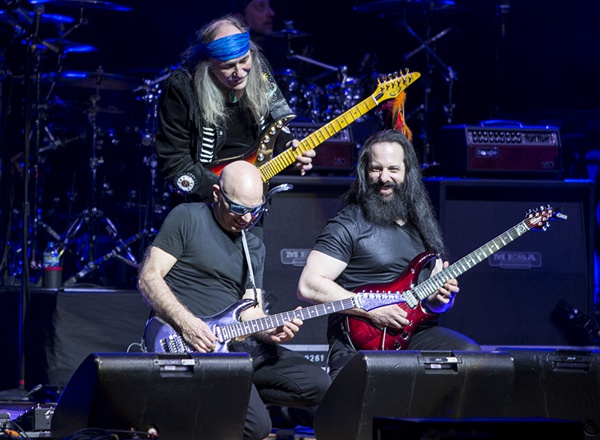 After a break of around twenty minutes, next up was the hairy monster which is Dream Theater guitarist John Petrucci. Over the last few years, I have noticed that in his day job Petrucci's playing has become a little over indulgent with too many notes to the second. Listen to the lead breaks he does today and compare them to those on 'Metropolis Pt. II' which are a lot more melodic and presents the opportunity to hear all the notes as they are played. Therefore, I expected to get a lot of shred during this set, but was unsure how it would be delivered; as part of Dream Theater material or purely his own music. Well, it definitely wasn't Dream Theater. The set opened with some really dramatic and stirring music, and there was just Petrucci alongside Dave LaRue on bass and Dream Theater's Mike Mangini on drums. 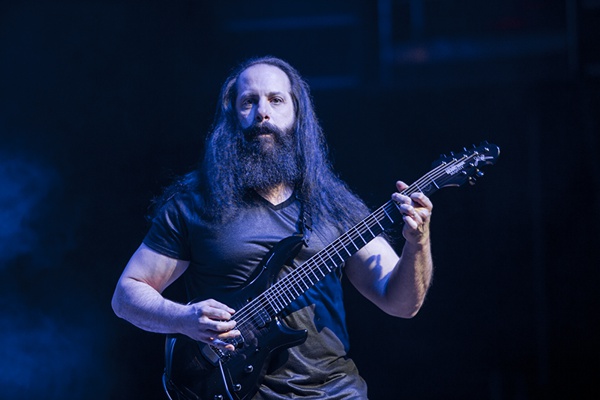 They launched into 'Jaws Of Life' which was quite enjoyable and with no real OTT-ness. After he told us that he was both happy, as they would be going home tomorrow, and sad, as this was the last show of G3 2018, he played 'The Happy Song' which had no words but was quite happy, and then straight into 'Damage Control,' with no introduction. There was quite a bit of widdle in this, but it was well contained within the structure of the song, and drama was added with the bass playing the recurring Eastern sounding refrain. There was, however, a short bass solo in there that was, in a word, Jazz and I just love Jazz! We then got a brand new "song" titled 'Glassy-Eyed Zombies' and the more I listened, the more I thought that it would sound even better with an orchestral backing. The last number of his set was the "difficult to resist moving to" 'Glasgow Kiss' which ended with a very brief snippet of Rush; if you really weren't paying attention, you could maybe have missed it. Overall, Petrucci surprised me with a more enjoyable set than I expected and a widdle rating of just four.

After another twenty to thirty minute break, the ringmaster Joe Satriani came on stage and kicked off straight away with 'Energy' and 'Catbot' (two tracks from his new album 'What Happens Next') before going back a bit with 'Satch Boogie'. New material was then delivered again with 'Cherry Blossoms' – which had a neat little motif played by Satriani and Mike Kinneally on keyboards – 'Thunder High On The Mountain' and 'Super Funky Badass' which saw a guitar duel between Satriani and Kinneally (which for me went on a little too long). 'Circles' was Satriani's widdley bit where strange noises from another mistreated whammy bar was the order of the day. It was good to hear an old favourite in 'Always With Me, Always With You' before the set was brought to its conclusion with the always energetic and cheerful 'Summer Song'. There was a fair amount of new material played tonight, which slotted in fairly well, but I wish the duel had been shorter in 'Super Funky Badass'. Satriani's set registered a widdle rating of seven. 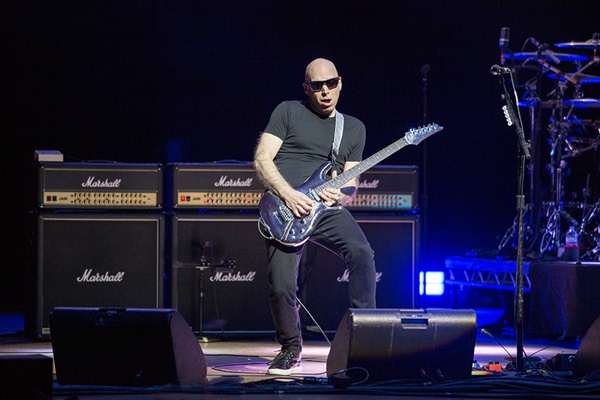 Of course, the night wasn't over yet as Roth and Petrucci returned for the customary jam. To start with, I was a little surprised (I don't really know why) and highly delighted to hear them play Deep Purple's 'Highway Star'. To be fair though, having that many guitarists playing something as precise as that made the sound a little mushy, but it was still good to hear. The vocals were performed excellently by Roth band member, guitarist and vocalist Turmann. The guys then played Bob Dylan/Jimi Hendrix's 'All Along The Watchtower' which saw big Hendrix fan Roth take the vocals. The last song, and one of the highlights for me, was Led Zeppelin's 'Immigrant Song' with Turmann once again on vocals and a brilliant job he did too. He also had the chance to do his own lead break during the session.

That signalled the end of this round of G3 and as Petrucci said, it was the very last night of the tour. While the venue wasn't sold-out, those that were there seemed to appreciate it. Who knows how long it will be before we see G3 over here again, if we do at all, but one thing is certain – Satriani will bring some of the world's best guitarists with him. 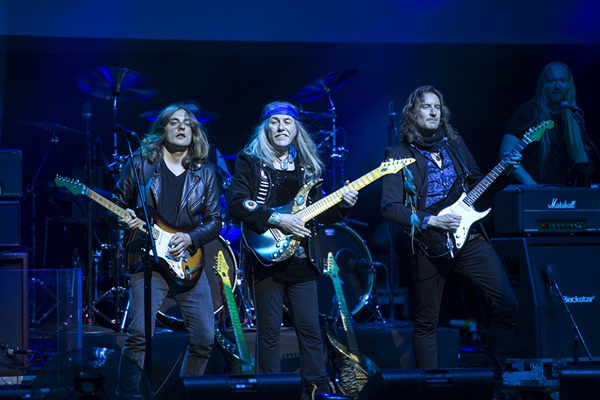