I have been a fan of Vixen and Janet Gardner for twenty-five plus years, but in all that time I have had very few live opportunities. In fact, the only time I have had a chance to see Gardner and Vixen live was when she played as part of J.S.R.G. who appeared at our very own Firefest in 2013 – a dream come true for me and my personal highlight of the weekend. Therefore, it was no surprise to anyone that I grabbed the opportunity to see the Vixen vocalist on her solo dates when she recently visited the UK.

It was pretty warm on this bank holiday Monday, and even more so in London. It didn't help that Transport For London had closed the Northern line on the tube, which is the only one that goes to Camden. This resulted in having to hop-scotch across other lines and then get the bus. Thankfully, the pain of that was immediately soothed by the wonderful opportunity to go into the venue before doors opened and meet Gardner, Justin James and their band. I'd like to express my thanks to Andy T for arranging that.

Once doors opened, it became apparent that the turnout for the evening wasn't going to be great, nor a sell-out. In some ways, I can understand that on a bank holiday Monday, especially as I recall there were also some sporting events on as well, but I would have also thought for such a rare appearance in the UK by a legendary Rock vocalist, that a larger number would have attended. However, this certainly didn't spoil the show as both acts gave it their all.

The support act for the tour was Midlands-based, female-fronted, five-piece metallers Sister Shotgun who delivered a thunderous eight song set. The band, led by pink-haired songstress Chloe Ozwell (who showed she possesses some vocal range) opened with the frantic 'No Hope' and the booming 'Miss Fortune'. Ozwell was a lively figure on stage and she had a good solid voice to match, while the rest of the band let rip around the stage. They followed this up with a new song entitled 'Kill The Lights', which was full of pace though Ozwell's vocals got a little lost for a short time, but she soon came booming back, before they unleashed 'For The Love Of Hate'. The latter had a lovely solo to open and at one stage guitarists Rob Hayes and Niall Willis ended up playing the neck of each other's guitar for a bit of fun. With a pounding rhythm, revolving riff and powerful singing, 'Fragments' came next before the fiery and frantic 'From The Ashes' and 'Overcome' which included some big vocals from the band's leading lady. They closed their short set with their single 'Silhouettes', which was a fine way to close their show. The band were great fun to spend some time around that afternoon and their set was even more entertaining. I will certainly be keeping an eye out for their next release and local show. Sister Shotgun are a name to watch out for if you like quality, female-fronted Modern Rock/Metal. 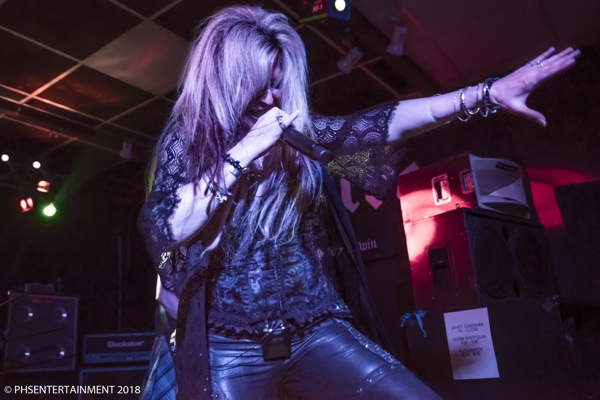 After the usual short break, it was time for Janet Gardner. There was a small technical hiccup before their set started, but Gardner took this opportunity to chat to the crowd and exchange some banter. The venue had filled more by this point but was still less full than I had expected it to be. The show opened with the Cantina Band music and 'Imperial March' from 'Star Wars' which I have to admit induced a rather large smile. Gardner, husband and guitarist Justin James, bassist Anthony Gemigani and drummer Richie Rivera then proceeded to let loose a twelve song set that consisted mainly of tracks from Gardner's recent solo album.

Right from the opening track, you could tell there was a great camaraderie between this foursome, but what really shone through the set was the wonderful chemistry between the husband and wife due of Gardner and James. There were lots of little moments they shared during the set that showed they were not only enjoying themselves together on stage, but also the fact that they enjoyed each other's little moments in the spotlight as well. 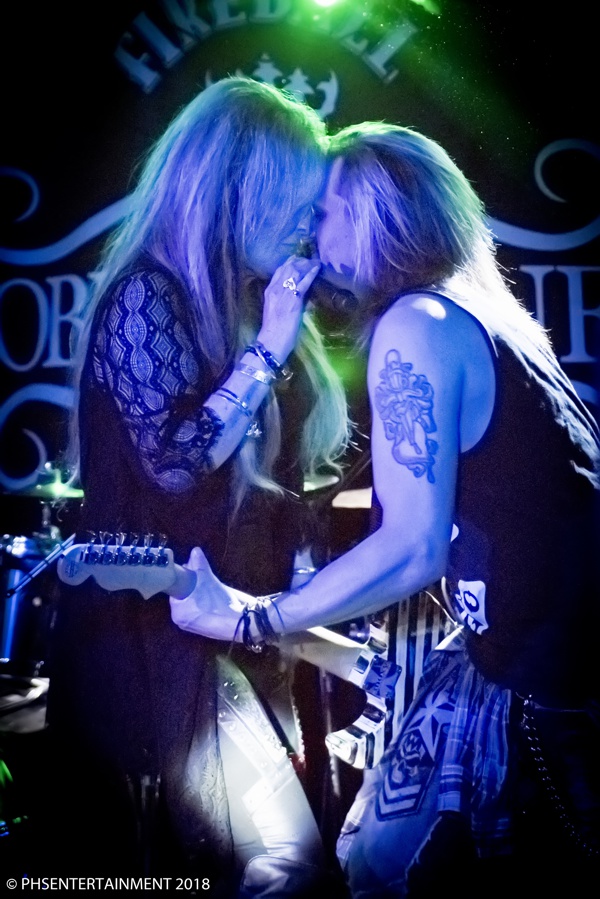 The show featured nine of the ten songs from Gardner's solo album with only 'Best Friend' omitted from the set-list. Gardner opened the show with 'If You Want Me', 'Your Problem Now', 'Hippycrite' and 'The Grind'. I must admit I wasn't that familiar with James before the solo album last year, but this guy can really play. He gave it his all (as did the whole band despite the less than full Underworld), struck the right poses, bounced around and was a blur of notes from his rather eye-catching black and white checked guitar that was designed by bassist Gemigani. The songs also had a bit more punch on the live stage and this gave James even more opportunity to fire out riffs and solos. As for Gardner, her performance was everything I had hoped it would be prior to the show. She was full of energy as she constantly prowled the front of the stage, head-banged occasionally, shimmied and danced, while she also looked amazing and her husky voice sounded absolutely great from where I was down at the front. Between them, they looked and performed every bit like the Rock stars that they are. After the opening foursome, there was a cover of CeeLo Green's 'Fuck You' (which Gardner awarded a t-shirt to an audience member who guessed who the song was by at the end) and this one was full of smiles and laughs from the leading lady as she roared out the vocals. There was a fun moment in the middle where James unleashed a funky solo and then Gardner gave Gemigani his moment in the spotlight with a little bass solo as she boogied mid-stage. Near the end of the song, Gardner added a little break and the crowd were encouraged to get involved and shout the lyrics back to her. 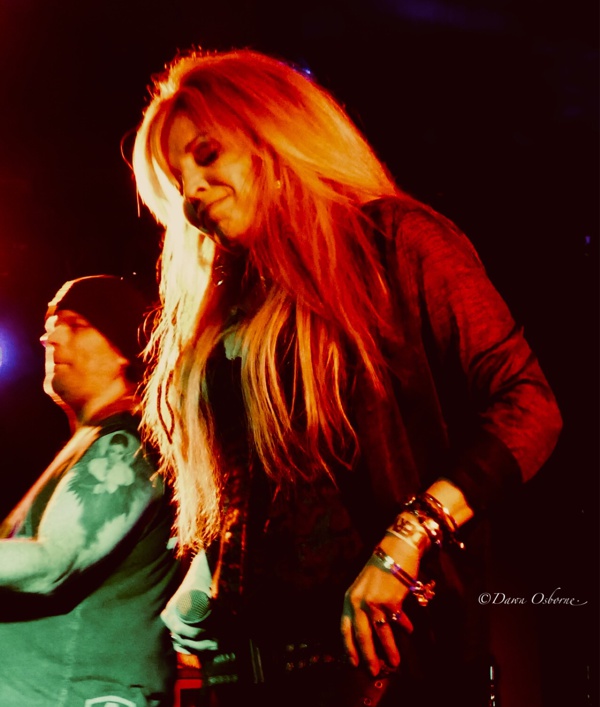 During the break before the next song, there was the rather amusing conversation regarding the perils of Gardner driving the band van across the country. To introduce the poignant and wonderful 'Candle', Gardner explained about how she lost her dad which was a very touching few moments. The band delivered a great performance of this one and followed it up with 'Lost'. After Gardner had introduced the band, she left the stage to allow Gemigani to take the mic and perform a cover of KISS' 'Love Gun'. It was then time for 'Let It Be Over' which Gardner explained some of the reasoning behind this antipolitical song. She then suffered another quick technical issue as the batteries ran out on her monitors, but that just allowed James a moment to talk as he fooled around with the odd riff before they launched into the excellent 'Rat Hole' where Sister Shotgun joined Gardner and Co. on stage. It is safe to say they all looked like a ball was being had on stage, even if it was a little cramped, especially when the crowd were encouraged by both acts to get stuck into the "ooo ooo ooo" chant. The last song of the main set was 'The Good Or The Bye', but I sadly had to leave at this point as I had no idea how long it would take me to return to Waterloo without the Northern line. I have to admit that I was most gutted to get home to find out the evening's encore had been 'Edge Of A Broken Heart' from Vixen which I believe went down rather well. 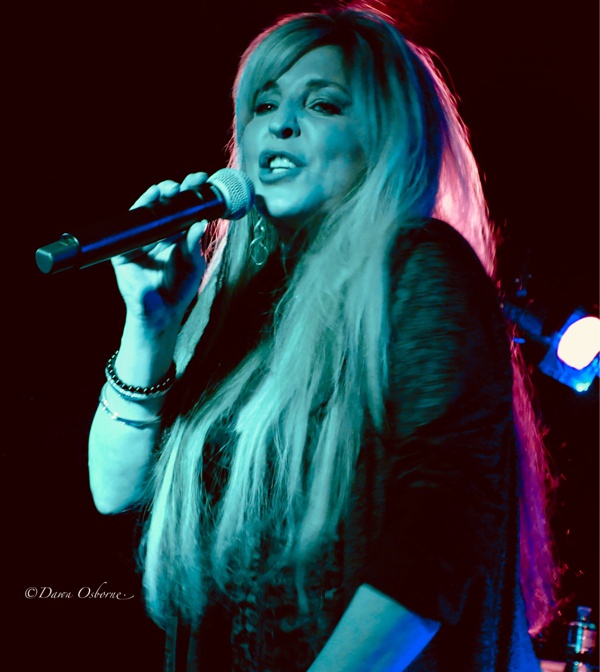 I had an absolute blast tonight and it was a pleasure to see Sister Shotgun and then Gardner, James and Co. Both acts performed like they were playing to a sold-out stadium rather than a half full club and it was a great evening all round. I hope the response to the solo album last year, and some fine write ups for earlier shows on the tour, means we will see her back in the UK and onstage sometime very soon, whether it is with James and her band or Vixen. To me, Janet Gardner is a legendary vocalist and it was an honour not only to meet her that afternoon, but to also enjoy a fantastic performance from right at the front. I can only end by saying, if you get a chance to visit Planet Janet, I encourage you to do so, you will be in for a hell of night.