In the increasingly congested market place that is the Symphonic Power Metal scene, it becomes ever more difficult to distinguish one band from another. Yes there are some great musicians, great singers and even great songwriters, but that special ingredient that makes one act stand out from the rest remains as elusive as ever. Thankfully, a beacon of light is about to be lit once again with the impending release of 'The Shadow Theory'. Fireworks celebrate the return of Kamelot with THOMAS YOUNGBLOOD and TOMMY KAREVIK ... 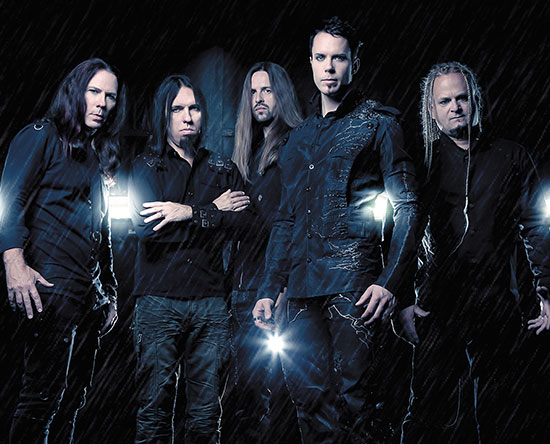 For more than twenty years now Kamelot have been captivating global audiences with their ever more spectacular stage shows; their steadily growing back catalogue of classic songs allied to increasingly ambitious visuals making them the 'must see' ticket when their tour hits town. Their last tour in support of 2015's 'Haven' being perhaps the most ambitious yet.
"There were so many highlights," Tommy enthuses. "It was a two year long tour in the end with additional shows in Israel, Russia and Greece. The Loud Park festival in Japan was just one of many memorable shows for me personally."

"We visited more cities than ever in the USA and around the world," adds Thomas, "but we approached each and every show, large or small with the same attitude."
Playing anything from small clubs to massive festivals can be a complex logistical challenge in itself, but the band pride themselves on delivering to the best of their abilities whatever the size or make up of the audience.

"We never want to cut corners with our show," states Tommy emphatically. "We feel that every paying person, no matter how small or big the room is, deserves the full Kamelot experience. The quality of music, the energy and the crowd interaction will always be there. Of course on a bigger stage we can bring a bigger production and that is something we always strive for."

The 'Haven' tour ran for the best part of two years, the last tranche of shows wrapping up the whole cycle happened as recently as November last year. Work on the songs that would ultimately make up 'The Shadow Theory' however began in earnest more than a year ago.

"We started as far back as December 2016," remembers Thomas, "when I travelled to Germany to work with Oliver (Palotai, Kamelot keyboard player) on new song ideas. We didn't have much downtime in between the various legs of the 'Haven' tour, but to be honest we work well in a crunch situation anyway. Plus, I get bored really being on vacation ... I'm still thinking of ideas for Kamelot even on a cruise to the Bahamas, ha!"

Back in the early days of the band songwriting was largely down to Thomas, but these days it tends to be much more of a collaborative effort.
"Right now it's split between me, Tommy, Oliver and Sascha (Paeth, long-time producer)," Thomas clarifies, "it takes the pressure off us all as individuals, and is really a great working situation because everyone stays true to the Kamelot sound."

Ah yes, that Kamelot sound! Described by many as 'Symphonic Metal', its combination of lush orchestration, grandiloquent arrangements and poignant melodies is arguably the closest thing you'll find anywhere to the classical symphonies of Beethoven, Wagner et all.

"Kamelot to me is more than Symphonic Metal," agrees Tommy. "It's more an entity on its own with a distinctive sound, and that's something we want to stay true to. What it all comes down to in the end though is just making the best music we can. The creative process, inspiration and where it comes from is very personal ... I know for example that Oliver must sit down to work to get inspiration. whereas others can only be fully creative while detaching their brains by doing something completely different."

"We try to pull in new ideas and sounds to create something fresh with each new album," Thomas continues, "but we're also conscious that we need to maintain our identity as a band. It can be difficult to work around sometimes; there always needs to be someone that says 'This is cool but it's not Kamelot'."

Although not a full blown concept album in the same sense as 2012's 'Silverthorn' opus, there is an embedded lyrical concept that binds the songs together.

"Thomas came up with the idea of basing the lyrics on Carl Jung's psychological theory around 'The Shadow Aspect'," says Tommy. "According to Jung, everyone is carrying a shadow being (your subconscious self) and the less it is embodied, the blacker it is. That of course paved the way for the self-reflecting and existential lyrics that have also become a Kamelot signature. Personally speaking, these are some of the most honest lyrics I've ever written."

"It's based around the three pillars," he continues. "'The Shadow Empire' represents the handful of people at the very top with all the money and power. They are shaping the world to fit their own agenda. 'The Shadow Key' is the resistance to that, the growing numbers of people with increasing awareness about what is happening around them. Knowledge is power, power to take control of you own life. On a personal note 'The Shadow Key' is also an encouragement for people to unlock their own inhibitions, to face their own fears in order to be able to fully achieve their potential. Finally 'The Shadow Wall' is the smoke screen they throw in front of our eyes to keep us thinking that we are making our own decisions and to stop people from asking why."

From the first writing sessions back in December 2016, the album was gradually pieced together over the course of the next year under the aegis of long-term producer Sascha Paeth.
"As Thomas said earlier," Tommy recalls, "it all started with Thomas and Oliver getting together and working on song ideas. Once they had some solid ideas I started working on the melodies. Then I met with Sascha to tweak those ideas and to do some rearranging and restructuring to fit the vocals. Some lyrics we worked on together but most of them I wrote on my own. I recorded the vocals as we were progressing and at the same time Oliver was working on the keyboards. It is always a race to the finish line and most of it comes together in the end, but the whole process took about a year."

"The actual recording started in February last year," Thomas adds, "and we worked here and there over the year. The final recording sessions were done in Wolfsburg in November. We've been working consistently with Sascha since 'The Fourth Legacy' album back in 2000, so it's almost twenty years. He brings an outside point of view and high level of experience. We love working with him!"

"He's the producer and always has great ideas in terms of arrangements," interjects Tommy, "but he is also one of the songwriters. He is just a super talented guy with tons of experience so of course he has lots of input. The great thing is that he is able to capture and amplify the Kamelot spirit through his mixes and accentuate the essence of the band time and again!"

Continuing the well-established tradition of guesting female singers to enhance the final audio experience, this time around the band chose Lauren Hart (Once Human) and Jennifer Haben (Beyond The Black), neither of whom have been involved with Kamelot before.

"Lauren was recommended to us by my girlfriend Kobra Paige (from Kobra And The Lotus)," nods Tommy. "We needed a growler for when we opened up for Iron Maiden last year and she did a great job. Jennifer is a friend of Sascha's. They'd been working together on the Beyond The Black stuff and he thought she'd be perfect for us."

As is also now customary, the artwork that adorns 'The Shadow Theory' enshrines the Kamelot ethos perfectly.

"We got Stefan Heilemann to do the cover again," Thomas explains, "he also did the covers for 'Haven' and 'Silverthorn'. We wanted it to symbolize both the past and the future. If you look you can see that there are elements from 'Silverthorn' in the artwork, but also new and modern elements to represent the future."

Although it's very much business as usual with the Kamelot machine, one major change for the band came with the departure of long time drummer Casey Grillo earlier this year.
"Casey has many touring opportunities that conflict with the Kamelot schedule," admits Thomas, "and he has his own company now which takes up a lot of time. After twenty years, I think we can understand why he would want to do something different and we wish him every success with that. We've known it was coming for some time, but we couldn't say anything until all the contractual stuff was cleared. We knew Johan (Nunez) already; he was the drum tech on our last European tour so he just seemed to be the natural replacement."
"Johan plays all the drums on the new album," adds Tommy. "We wanted to give him the chance to get right in there and integrate as a full time member of the band right away. I think he's done a great job on the album."

With the press machine now in full swing and dates already booked well into 2019, the upcoming world tour is set to be bigger than ever.

"The response so far has been amazing," Thomas enthuses. "It's crazy how many offers we've had so far. Japan is confirmed, 90% of Europe too ... and we start here in North America in April. We're planning to have even more lighting and theatrics than last time, we've revamped our live sound gear and full stage mixing gear, and full rehearsals begin imminently. We've rented a huge room with full PA and lights, which is another first for us! We're planning on doing three or four new songs and then trying to figure out what works best from the past. With 2019 already 60% booked, we're going to play it by ear but it looks like we'll be touring this album well into 2020."

Finally, if you thought their 2006 DVD 'One Cold Winter's Night' was an impressive piece of musical theatre; plans are already well advanced to capture this tour in its full glory. And with a theatre three times bigger than last time, the possibilities are endless!