The Danish titans of bombastic Progressive Metal return with their fourteenth album 'Cast In Stone'. It's the classy mix of Symphonic Metal, Classic Rock, Power Metal and Melodic Rock that we've come to expect from this band and their lynchpin, keyboardist Andre Anderson is understandably excited about the new record as he chats to Fireworks. 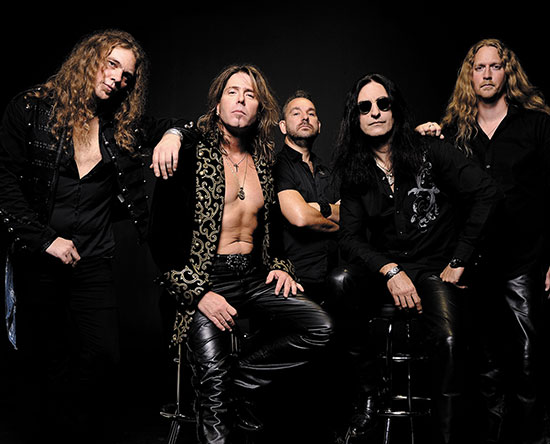 You had a three year gap this time since your last studio album 'Devil's Dozen'. Did that extra time help with how the new record turned out?

We toured and did live albums in between, and did a number of festivals. The record company suggested putting out a live album in 2016, as we had done a live disc in 1996 and we could celebrate its twenty year anniversary. So, we recorded a DVD of our Moscow show. Basically, I was writing material for this album in between. This worked well because I could work on something then go away and tour and come back and listen to the new music afresh. Normally, when making a record we have a block of time to work but this way round I was able to live with the material for longer. Now though, I've heard this album so much, I can tell you where any bit of hi-hat is on the record... I don't need to hear it again!

Do you think the fact that you're the main songwriter and keyboard player makes what you do sound different to the Metal bands that are driven by their guitarists?

Part of me is a guitar player. So when I'm writing I know how the guitarist would play a certain part. I also play the drums, horribly! As a fan, as a kid, I was listening to Neil Peart and Ian Paice and I'd try to emulate them. I must have been really annoying when I started making music as a teenager because I was always watching and commenting on what the other guys in the band were doing. Why don't you play it like this or that? I have been so blessed to have worked with phenomenal players over the last twenty-five years. I have the main ideas; this riff here and this solo here, then the others in the band arrange it in their own way. I'm open to anything they bring to the records. I'll make rough demos and bring it to the rest of the band. They'll criticise the crap out it. They'll say that's eight minutes long, you can cut it to four minutes. We don't have heated discussions, it's very amicable. The band are my first line of defence to stop me getting carried away and recording music that the audience wouldn't like. The band surprise me every time and their suggestions make it sound better ninety-nine times out of a hundred.

What's the idea behind the 'Cast In Stone' title?

The title 'Cast In Stone' came from our bass player. He was a fan of the band before he joined us and knew a lot of our material. He'd hear me being critical of a lot of our old songs and I'd say why I didn't like this one or that one. He said why don't you take the best elements of all those songs you do like; the main ideas, the signature beats and try to put all these ideas on one album. We had the monumental dragon logo from day one and we thought 'Cast In Stone' was distinctive and suggested something solid and forever.

Tell me about the opening track 'Fistful Of Misery'.

Everyone has experience of that; break ups and so on, that sense of being mistreated. I had a couple of lyrics and the song just happened. It's an anthem but at the same time it has this subdued feeling in the playing. It was democratic choosing this as the opening track and as a song that represents the album because the guys in the band liked it so much they felt it should come near the beginning. Originally, it was going to be the 'Cast In Stone' instrumental track that opened the record.

'The Last Soul Alive' reminds me a lot of Rainbow's 'Spotlight Kid'. Was that deliberate?

That was intentional! Well spotted, I'll take the blame, I wanted to create a late 70s feel. I could easily have moved a couple of chords to mask it but I didn't want to. I wanted it to be in 1978 or thereabouts. I wanted that Jon Lord Hammond organ, or it would have been Don Airy at that time. I wanted it to sound like a homage on purpose.

The closing song 'Save Me II' can only be described as a Symphonic Blues song, which is original. How did that come about?

I've done this kind of thing from time to time. In 2003 we did a Jazz song. It's good to surprise people. I told the guys we were doing extra tracks. I thought 'Save Me' was going to be a bonus, we jammed back and forth, it seemed a shame not everyone would hear the song so I took it away and did it in a way that did justice to the song, It starts off as this swampy Blues Rock song before it becomes Royal Hunt.

You've made a cool lyric video for 'A Million Ways To Die' with Berny Kellerer the webmaster of our very own Rocktopia website. How did that contribution transpire?

We were going to make a real video for'Fistful Of Misery' first, which I actually hate making, but Berny did it so quickly it meant 'A Million Ways To Die' was released first. It started in 2016 when we worked with Berny on the DVD package where he helped with the production for the Blu-ray version. When we needed to get into video production I didn't know how much was involved so I asked our own cover artist Kai Brockshmidt if he could help and he suggested Berny. He offered to help us and he's done a great job. It looks very elaborate and he did it so quickly.

Have you decided what songs you'll cover on your forthcoming tour?

Live, we'll play the first two songs off the album for sure. We've got a couple of dates in Russia and Budapest. We'll do a third off the new album too. It's very hard for a band who have been going for twenty-five years to pick a setlist. It's easier when you've only got one or two albums. We like to mix it up, we don't want to get stale, I see lots of bands I grew up with who rarely change their set list these days. We always change ours. We try to pick out six or seven all time favourites. If we don't play them all this time we'll play the others next time round. An up-tempo one here, a ballad there for flow. We never play the same setlist. You have to please the fans but you have to stay fresh for yourself too. That's the main part of it; enjoying playing live. I don't want to get bored so coming up with setlists is a complex thing. You want that positive energy to translate with the crowd. One of my favourite live gigs was in 2005, seeing Whitesnake doing their Live in the Still of The Night set. I had no preconceived ideas of what it was going to be like but the band were on fire and I think about that night and how to create that kind of electricity.

How would you say your relationship with DC Cooper is these days since his return to the band?

It's safe to say it's better! We're very different animals. With all the rumours in the press of us not getting on; we never actually had any issues with the music. We are different characters and when we were younger we were more aggressive and louder! He came in and had to replace the original singer so it was sometimes DC on one side and the band on the other. When we broke up in 1998 it was for the best for both sides. Some divorces are needed. In 2010 or '11 when we got back together the stars were aligned. We didn't meet until we were in the rehearsal room. I had some reservations but even the way he walked up to the mic was the same as before and I knew we could work together. It was a relief. When the rehearsal was done, we were talking about stuff and we had changed, we had grown up and understood each other better. We didn't compare ourselves and we accepted each other for who we are. In the past every single little detail seemed important but now we have more fun working together.

Royal Hunt's sound has more Classical music references than most Metal music has. Do you listen to a lot of classical music?

I do listen to Classical music at home. I have a vast collection. I'm not a snob about it though. I just like the sound of it. I'd say a third of what I listen to at home is Classical. I don't listen to that much music these days though which sounds strange because music is around us all the time. I still want music to be an experience. Too much of how people listen to music these days is as background noise.

You've released this album through your own label. How's that working for you?

We're still on a record label in Japan. We kept it because we need their support culturally and in the market place. In the rest of the world, we could have continued with Frontiers, another label or do it ourselves. We have more manpower, more hours to do this ourselves. In my opinion some labels have too many bands these days and there's only so much time they can devote to promoting an album. When you're doing it yourself, you can take as much time as you want. We can continue pushing it for months.