Mark Mangold, that name conjures up a lot of memories for all of us who read this magazine. Touch, Drive, She Said, guest slots with the great and the good who perform AOR has made his name, in our circles at least, a household one. But before all that Mark Mangold performed with a power trio called American Tears. It's been almost forty five years since that band made a record, so Fireworks talks with Mark about the reasoning behind this new release, what still drives him as a musician and much more. 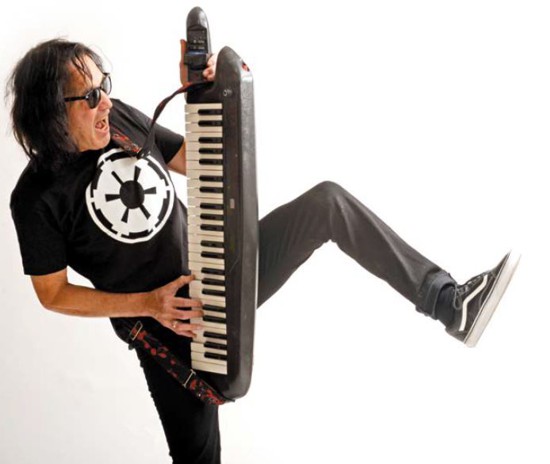 The first album under the moniker of American Tears, 'Branded Bad', came out almost forty-four years ago. So what was the reasoning behind you making another American Tear album?

Wow, forty-four years, I hadn't thought of it like that really. I wanted to play the keyboards again is the answer. I wanted to be in a place where we were creative musically again, where we weren't limited in what we did, trying to do something unique and maybe not so song orientated. I think also that part of doing this was the situation of our times, especially politically. I won't dwell on it but we all know what's going on, here and around the world at the moment. It was the same back when we recorded the first American Tears albums. Political upheaval, Vietnam, anti-war, anti-draft and now we have all these similar things today, with political power being mis-used etc. Our music is kind of a protest to what was going on then and now. We always wrote songs about inclusion and accepting all peoples and with today's situation bringing up old memories I got into that American Tears state of mind, which got me to thinking about how all the progress we've made over the years is being thrown aside at the moment. So a lot of the songs lyrically speaking on the new CD are about the struggle we're in and the stupidity of some of our leaders today.

On the new album it's basically just yourself handling everything. Whilst on the earlier albums you were at first a power trio. Why are you the only musician on 'Hard Core'?

I definitely thought about doing this album the old way, you know with a band but sadly a lot of the guys are now gone. Greg Baze has passed away and I tried real hard to find Tommy Gunn but I just couldn't. So after that, I sat down and looked at the budget I had to make this album, and it isn't like the old days where you got a lot of money to make records. In the end I knew this was going to be for me a labour of love but a very complex musical one. I mean the drum stuff alone is so complicated that to just have someone come in here and there to put down the drum tracks wouldn't have worked, and I knew I could do it and get the drum sound I wanted, so I decided the best way of doing this album was if I played everything. Of course my preference is always to have a band but this is just how it worked out this time. When we do the next American Tears album, there will be a band.

With a gap of almost forty-five years a lot of people will only know you as the man who was in Touch and Drive, She Said. They, therefore, would be more in tune with the music of those bands. But on 'Hard...' it's just you playing drums bass and many, many keyboards. To keep the fans who came later happy, was it ever in your thinking to have a guitar player?

No it was always going to be just keyboards. The mission of American Tears when we started out was to be a keyboard band. We wanted to create the parts usually filled by a guitarist with the keyboards, so if you listen to the older albums and this new one, there are solos but solos, played with keyboards through Marshall amps getting the distortion and energy you expect from a guitar, but all done on my keyboards. That was what I wanted for this new album. If you listen you'll hear me playing riffs that normally would be the province of the guitar player but I'm doing them on my Hammond.

My favourite type of albums are the ones where you as a listener have to sit down and take the time to work out what's going on before you can really start to enjoy them. Instant fixes are all well and good but investing in an album has always made me love a band's music more. What do you feel about this?

I agree. I always try to put depth and feeling into what I do. I never sat down when recording this album and said to myself, right Mark, who is this aimed at, how commercial should I make this, what's my target audience? I just wanted to make a record that, maybe the person listening to it, has to really work at to get the most out of what I've created before they get what I'm trying to say. I didn't want to have limits or boundaries which in some genres you have to adhere too. On 'Hard...' I just wanted to make music, music that needed space and time to get to know. Making this album really opened up my creative thinking processes. I'd start out with say, a drum beat, then I'd loop that in the studio, then just start playing along to it letting the keyboards and creativity take me and the music to wherever it wanted to go. Kind of free flow musicality if you get my meaning; and I wanted the audience to come on those musical journeys with me. Band's like Purple, Tull, Zeppelin had that free flow thing, where they would just play together to see where the music took them and 'Hard...' is my take on that.

As you played and did almost everything else on this album, I wonder how long it actually take to record?

Funnily enough not as long as you'd imagine. Everything took about two weeks, which sounds fast I know. But when I opened those creative flood gates (laughs) the music just seemed to pour out of me. It probably took longer to make sure that everything sounded right than it did to record the music. The lyrics were probably harder than the music because each of the tracks in the beginning were instrumentals and I added the words later. So the music, two weeks from start to finish and the whole thing, production lyrics etc, about two months.

I'd like to talk about a couple of the album's songs. Firstly 'Tear Gas', which has the same lyrics as the one from the album of the same name but musically it's so different. Did you always want to re-visit this song and give it an update?

When I sat down and decided to do this new CD it was that song that was in my head, the riff especially. So I suppose to make the connection between American Tears of the 70s and now I decided to use the 'Tear Gas' lyrics in a new song. It was never to fix it or to say there was anything wrong with the original, which is a song I've always loved, it was just a way of connecting then with now. Also a lot of time has passed since the first record came out and there will be people like you who know our music but also a new audience who doesn't, so maybe having that song on this CD will make them curious and they'll want to go and check out the earlier albums.

Tell us about the songs 'Ferryman'', which I found to be smoother and lighter in tone than a lot of the other tracks on this album and 'Lords Of Light' where lyrics such as 'No ghost of lies sent to deceive us, the demon eyes that come to get between us' are very poignant.

Well I'm a big fan of 10cc, The Moody Blues that kind of stuff. When I was writing the album I decided to use the Mellotron on a couple of songs and 'The Ferryman' was one of them. If you use the Mellotron you can get an almost string like quality to some of the keyboard sounds, which as you said gives the music a lighter feel. The song itself is a bit dark, dealing with death and the river Styx hence 'The Ferryman' title. With 'Lords...' it has more modern phrasing and I suppose lyrically it's an anti authority song, which is important to me. My lyrics then and now deal with what is going on in society and I think music can be good at getting people to wake up to what's going on in the world.

With a new album under your belt, what's next for Mark Mangold?

Well the second (new) American Tears album is already underway. To be honest it's almost finished. I'm also always writing and producing for other artists. I've got a couple of things coming up in movies and I write for Pop singers because in this day and age you can't just concentrate on one genre, you have to diversify to get ahead.

Finally, did you always want to be a musician?

Simple answer... Yes! (laughs) It's a disease and obsession. It's the language I speak. I do it because I love listening to music and I'm a fan of music. Being part of that creative process, having that musical soul in me, has been a wonderful thing. I love the way music hits you like a blow to the body, how it makes you feel and it's been that way since the start. So please listen to this new American Tears album on a good system and hear it how it was meant to be heard. Loud up-front and hitting you like a body blow.