Since they formed in 2005, Las Vegas based Five Finger Death Punch have progressed and developed to become one the major forces in the Metal/Rock community. They tour arena sized venues and have achieved gold or platinum status for every release since the 2007 debut, 'Way Of The Fist'. 2017 was something of a make or break year for the band, becoming involved in a lengthy legal battle with their label, Prospect Park, who alleged that Five Finger Death Punch had breached their contract by commencing work on a new album without the label's consent. On top of this, during a summer European festival tour, lead-singer Ivan Moody walked away from the band and the touring commitments were completed with Bad Wolves frontman Tommy Vext. With label disputes now resolved and Moody back in the ranks, FFDP have released what appears to be their strongest set of songs to date, 'And Justice For None'. With just over a week to go before the huge Rockville festival in Florida, guitarist and founder member Zoltan Bathory took some time away from rehearsals to have a candid chat with Fireworks about the new album and the personal demons that caused the temporary loss of their singer nearly twelve months ago. 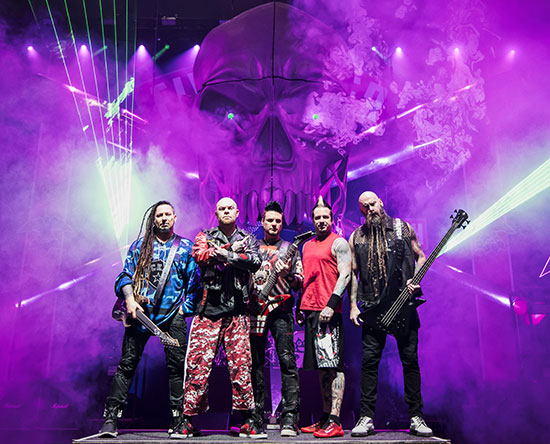 The issues with the record label are now history and FFDP can move forward with the promotion of the new record, even though much of the material is two years old.

Almost all of the new album was completed back in 2016. We had to do a little bit of arm wrestling with the record label and during that time in 2017 we had the time to live with the songs. We heard things that needed fixing, maybe vocals or guitar solos, and then we actually added two more songs, 'Fake' and 'Bloody'.

It doesn't feel strange talking about the songs, even though they were written so long ago. We don't write about mythology or science fiction and we don't write love songs. We try to comment on issues that are socially relevant. We want to write about things that we can relate to, such as the human condition. There was never a worry about songs written in 2016 being released two years later because they still occupy a certain place in time. When we wrote the songs the world was getting a little bit crazy and now we're releasing the album and the world is really fucking crazy. It's almost like time was on our side. The songs and even the album cover connect with what is going on in the world right now.

Ivan Moody's temporary departure from the band is a subject that Zoltan is not afraid to talk about. It was a challenging period for everyone concerned, but it has been the catalyst for a new found enthusiasm, especially when touring and playing live.

We are 100% stronger now. 2017 was a tornado for us and we were in the eye of the storm in so many ways. Obviously it is no secret that Ivan was going through some difficult things in his life and he had been struggling with alcoholism for a long time. Both he and the band had to make some choices. He's a grown man and should be responsible for his actions. We were there to help, but it was something he had to do for himself. He is very passionate about what he does and he lives for that ninety minutes when we are up on stage.

It must have been difficult watching him self-destruct with what has been a problem that has been the ruin of many people in the Rock music business in the past.

We knew we couldn't carry on and something had to be done. We couldn't take the bottle away from Ivan but we could take the band away from him. It was really heart-breaking to see our brother in the state he was in. We had gone through so much shit together and so many good times as well. He had to go to rehab or we were going to watch him die. He did go to rehab and he did get sober and it has made such a difference. Some of the shows we did after his spell in rehab are some of the best we have ever done, simply because Ivan was sober. We can add a few more songs to the set because it isn't such a challenge to complete a show any more. We have been everywhere in the world but Ivan doesn't remember. When we went to Paris he saw the Eiffel Tower at last. It really is like going to places for the first time for him and we are all experiencing life through his eyes.

They have enlisted the production services of Kevin Churko once more and he has now almost become the sixth member of the band, bringing out the best of them musically and harnessing their natural aggression and emotion.

2016 and 2017 were such crazy times and I think that is reflected in the music and lyrics on the new album. There were so many highs and lows it was inevitable they would be channelled into the writing process for the songs. The challenge was making a coherent album with everything that was going on. It is quite a diverse set of songs and we have tried a few new things. It is important to keep things fresh without moving away from our signature sound.

2017 saw the release of a compilation album entitled 'A Decade Of Destruction'. It was a celebration of the band's first ten years as recording artists and included two new songs, 'Trouble' and a cover of The Offspring's 'Gone Away'. 'Gone Away' is included on the standard edition of the new album, whilst both are included on the deluxe edition. The band have come a long way during the first ten years and that is clear when comparing the debut record with the new one.

I wrote nearly all the music for the first album and our style at the time was primarily Metal. When Jason Hook (second guitarist) joined the band the musical direction changed slightly. It was still easily recognisable as FFDP, but it was more Rock orientated and I think that comes across when you listen to the second album, 'War Is The Answer'.

Alongside the Offspring cover there is also, surprisingly, a cover of Kenny Wayne Shepherd's 'Blue On Black' on the new album. Cover versions have successfully featured on many of the previous releases and received the FFDP treatment along the way. These have included The Animals 'House Of The Rising Sun' and Bad Company's 'Bad Company'.

We recorded 'Bad Company' for the 'War Is The Answer' album. We always include it in the live shows now and it is quite emotional when the crowd joins in with it. It was surprising to us that some people who heard it for the first time didn't even know that it wasn't one of our own songs.