With over seventy five million records sold, sixteen top thirty hits and ten multi-platinum albums under their belts, there can't be much left for Foreigner to accomplish. Their live shows are always superb and they consistently play to enthusiastic audiences all over the world. Their latest endeavour saw them jet off to play two sold out concerts in Lucerne, Switzerland, this time alongside a sixty piece orchestra and choir. The performances were recorded for DVD and CD release, so Fireworks chatted with vocalist Kelly Hansen to hear more about the ambitious project. 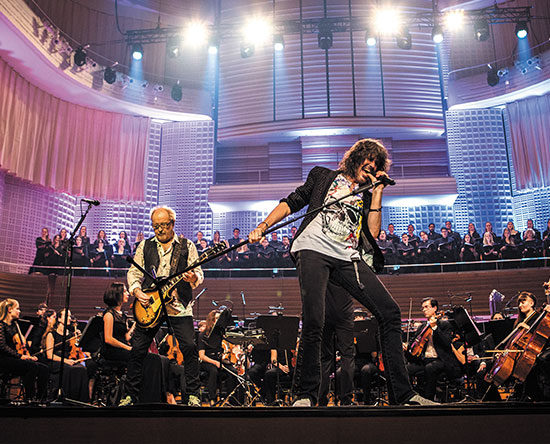 Since Foreigner recruited Kelly Hansen to be their new frontman, they have put out a string of live releases, a studio album, 'Can't Slow Down', and an acoustic record. However, while some legendary Rock bands like Deep Purple, KISS and Metallica have previously dabbled with playing alongside an orchestra, Hansen explains that was never Foreigner's intention.

"Actually, KKL Luzern approached us about working with us on this project. We had never thought about it at all, they brought us the idea and we basically collaborated on it from there," the vocalist explains.

While Foreigner are seasoned live performers, working with a sixty piece orchestra and a choir was obviously something new to them and Hansen pulls back the curtain on just how many potential pitfalls the project created.

"There were several challenges," he says. "Firstly there were over a hundred people on the stage... okay, the choir were in the balcony, but I'm counting them, there were a lot of people! Then, when we got there, it was decided to film and record the show too. So not only were we working with all those extra people, but there's all the minutiae of those particular elements... mic-ing up an orchestra and a Rock band simultaneously on the same stage creates a huge amount of issues with sound bleed, trying to get a clean signal... for example we had to put Chris Frazier in what was basically a clear perspex box, so his drums were isolated. It was a massive challenge and on top of that there was less room on stage which changes your performance."

If that wasn't demanding enough, there was also the small matter of the songs having new arrangements in order to successfully mesh the Classic Rock of Foreigner with an orchestral backing and choir into one seamless sound. In order to achieve this, the band's leader and chief songwriter Mick Jones worked the Grammy nominated team of Dave Eggar and Chuck Palmer. Eggar, a Juilliard protégé and cellist/pianist/composer, and Chuck Palmer, producer/writer/percussionist, had already worked with an array of artists such as Paul Simon, James Taylor, Patti Smith and Coldplay. The Foreigner shows were the result of almost a year's worth of work alongside Jones.

"When it came to the arrangements, that took months. It was done long before we even got together with the orchestra," Kelly confirms. "Mick spent a long time working with Chuck Palmer and Dave Eggar to put those arrangements together. That meant the band had to really be on point. The whole time on stage we were thinking about the arrangements, because the orchestra are playing to sheet music. Normally when the band play live, if we want to extend a section or something happens, we can change or jam around it. But with the orchestra, you have to stick to what was written and play it perfect every time because they're reading music to play along with you."

Anybody who has ever been to a concert which features an orchestra will know how loud they are naturally, which raises the question of how it was for Hansen to be on stage with not only the orchestra, but a choir and a Rock band too. Fortunately technology helped out there.

"We have custom made and custom moulded in-ear monitor systems which not only generate sound, but because of the way they are moulded, they also work like an ear plug," the singer explains, "so the only thing that comes into my ears are what my monitor man sends me, per my specifications. They give me just the right amount of drums, guitar, orchestra and choir that I want and need to make it sound the way I want to sing over. That part worked great, luckily that was one of the few things that wasn't an issue!"

While the concert features all the usual Foreigner classics such as 'Hot Blooded', 'Double Vision', 'Waiting For A Girl Like You' and 'I Want To Know What Love Is', some lesser aired tracks also get a welcome outing, such as 'When It Comes To Love' and 'Fool For You Anyway'. Even rarer is an outing for a track Mick Jones co-wrote for the 'Still Crazy' film soundtrack, called 'The Flame Still Burns', which Foreigner recorded a version of for their 'Acoustique' album.

"We wanted to have a varied dynamic, so adding in 'Fool For Your Anyway' really lends itself to having a horns section because it's got a real Soul kind of a vibe," Hansen states. "With 'The Flame Still Burns', that's such an epic piece, it just made sense that it would work really well with an orchestra. Mix those in with the usual up-tempo stuff and the big Rock ballads and we felt that it gave a suitably varied show."

'When It Comes To Love' benefits greatly from the choir intro and fits beautifully alongside the more legendary material, which begs the question if anything else from the 'Can't Slow Down' album, to date the only studio album of new material with Hansen on vocals, was considered.

"Honestly, we really just looked at songs rather than what albums they came from," he replies candidly. "There are, naturally, limitations when putting together a Foreigner set. We always start with a big pile of songs and then just have to whittle it down until we think we've got a well balanced set. I'm very happy with the song choices, I thought putting 'The Flame Still Burns' in was great, it's nice to get to do something we don't normally do, but working this way with the orchestra, even the songs we always play felt new and unusual – like when we play that big B-section in 'Juke Box Hero' and there's a choir there that we don't normally have, that new sound makes it quite a trip."

Hansen also shrugs off the suggestion he might be frustrated that as a writer he's only had the opportunity to contribute new material on one album, when 'Can't Slow Down' was released back in 2010.

"Personally I thought it was really important we made 'Can't Slow Down', that was the one thing we hadn't done since we got together, put out new material. I didn't feel it was necessary to put a lot of new stuff in the set just to put my stamp on something. We have played material from that record live and I enjoyed it but when you have as many well known songs as we have, if it meant taking out a really well known song the audience loves for the sake of playing something new, I don't think that's as important, personally."

As it has been several years since 'Can't Slow Down' it's only natural to ask about the possibility of new material from Foreigner.

"We are touring a lot so there's always a chunk of unfinished material lying around," Kelly responds. "It really comes down to a matter of time. When we're busy touring there really aren't enough hours left in the day to be writing. There's always stuff in the pipeline and more stuff to come out though, that's for sure."

With Hansen referring earlier to playing 'Juke Box Hero', it brought to mind the well known notion that things get easier the more you do them – so I ask if that is the case for that incredible long, sustained note he hits every time they play that song live. He chuckles.

"That's really an exercise in technique, and it's getting harder and harder for me to do! It's basically 24 seconds of me holding a note and it's not a trick, it's me having to measure the amount of air I put out to hold a Rock note. About two thirds of the way in my body starts telling me to stop doing it," he laughs. "But I have to ignore it, so it's an exercise in self control and technique. But it's getting really hard to do now so I don't know how long I'll keep it in the show!

I ask how it made it's way into the show in the first place and Hansen laughs again.

"I don't really know, I think I just did it one night out of nowhere and that was it - I made a rod for my own back!"

A real highlight of Foreigner's set is the brilliant acoustic re-working of 'Say You Will', which has a spine tingling vocal arrangement. I ask if the singer has a particular highlight, but his response is typical of the enthusiasm he clearly has for fronting Foreigner.

"Every day is different. Sometimes the venue can be the highlight, sometimes it's the audience reaction, sometimes it's how well the band are playing, how well we can hear each other... and I'm really grateful that unlike a lot of bands who play a show and have to wait until the last couple of songs to play their best known material, with this band we have basically a whole set full of great songs. It's apples and oranges and some days I like an apple and others I prefer the orange. Luckily, I have a gorgeous basket of fruit to choose from!"