Originally formed way back in 1994, Sevendust has remained something of a constant in the world of alternative Rock/Metal. Latest release 'All I See Is War' is, remarkably, the band's twelfth album and continues a career spanning twenty one years that first started with the Nu Metal tendencies of the self-titled debut – part produced by ex Twisted Sister guitarist Jay Jay French – through to the more modern sounding latter day 'Kill The Flaw'.
'All I See Is War' finds Michael 'Elvis' Baskette (Alter Bridge) at the production helm. As a result the album has all the old Sevendust dynamism and vitriol but this time around there's an added commerciality to proceedings (check out the piano lead 'Moments') that may just give the band a wider appeal. Fireworks caught up with guitarist Clint Lowery to chat about the new album and its conception. 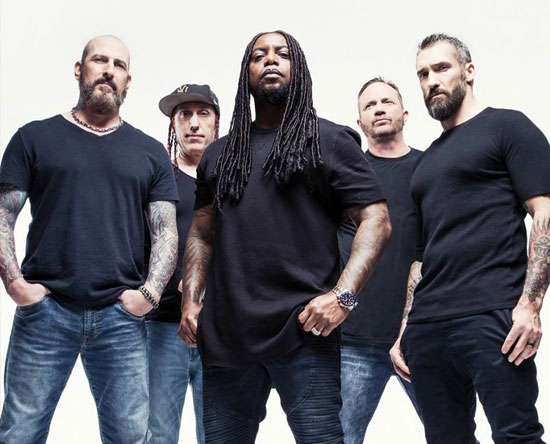 Is 'All I See Is War' a concept album?

No, it has a common theme lyrically but nothing that ties each song together specifically or in a storyline format. We always try and have a consistency in our records, an overall flow that creates a journey when you listen. We were big fans of those type of records when we were growing up, so those influences come out in our presentations, and in our artwork as well.

The album's message is to keep your guard up. To be aware of your surroundings, the temperament of the people and its institutions. The record's lyrics are all based on our observations of the world. The conflict within it and the internal conflicts in our personal lives and our thoughts. Being able to express concerns and even anger about it. We are not angry men but the world can pull those emotions out of us.

Generally the title and overall view of the record happens when it's done. We never start out with a clear theme, it reveals itself in the final product. There is a bit of a goal in the beginning. I ask myself questions like, "What do you want to say? How do you want to say it?" I think it's important to at least have an idea of certain things you want to express. The inspiration for the theme and content is the current state of the world and humanity.

Would you consider yourself as a band to be political?

Not at all. The only reason we don't engage that topic is based on the fact that we don't spend enough time analysing the facts and situations to be some sort of voice. We have people who follow us and see us as a mouthpiece in some ways, so we are careful not to speak foolishly or without being armed with facts. Too many people use their mouths before they use their heads; it's ignorant and blind. Sometimes admitting what you don't know is the smartest thing you can do.

What similarities and differences are there between this album and the albums of the past, musically or otherwise?

The overall tones and lyrics have a similar vibe. The sonics on this are a little bigger and badder due to Michael "Elvis" Baskette, our producer, who brought that in. The basics that are Sevendust are still there. Morgan's drumming and screaming, Lajon's soul, Vinnie bringing the low end, John and I doing what we do. There are certain things we cannot escape and honestly we don't fight what we are.

How many songs did you write for the album and how difficult was it to whittle it down to a final twelve?

Between John and I, we wrote around sixty ideas. It was pretty difficult choosing the ones that made it. Elvis was a big part of that process as well, which was a Godsend really because if it were up to the band we would still be debating which songs made the record.

You have been a band for a very long time, so how difficult is it to try and keep the material fresh after eleven albums? Do you ever get writer's block?

We have a song called 'Not Original' that I wrote about writers block or about being stale in your life in general. It's a challenge, but it's also natural to want to grow and evolve. We embrace change. We have a mutual respect for each other that helps us last in this game. When you can preserve that, you can endure a lot. Creatively, we have always been on the same page overall. There's never a day where we totally disagree on the objective. But it is very challenging to keep things fresh. Having a few different writers within the band helps also.

How do you feel when you look back at what you've achieved over such a long time period?

With extreme pride, gratitude, and fulfilment, mixed in with some regrets and sadness. Any band who can last this long with their original line up has my respect. That in itself is an accomplishment.

To what do you attribute your success?

Consistency. Treating our fans with respect and mutual respect for each of the band members. The music has to have some quality. Fans can sniff out a dud, they can tell when you're phoning it in. Writing music is my number one priority. The Rock star lifestyle is bullshit, music is what matters in the end. Certain looks and trends come and go. Most of those bands have regret. I want to be able to play my catalogue for my kids with my head held high.

Did the songwriting follow the formula for this album or was it a slightly different approach?

It was our formula but with the addition of Elvis Baskette as producer. He had a big voice on this record. We have a basic formula; John and I write a library of riffs, the band maybe writes a few as a whole. As a band we pick the strongest of the ideas musically. Myself, John, and Morgan start writing vocals with Lajon coming in and out of those writing stations. It's not a traditional writing system but it works for us. Most people assume Lajon writes all the lyrics. I like to let people think that because at the end of the day, he is selling our ideas, emotionally and vocally. His strength is delivering, we create the creative package.

You're now on Rise Records. How did the move happen?

It was time to find a label and they, hands down, were the right fit. They bring a lot of energy to us, and a lot of fresh ideas. We're very excited to work with them and so far it's been a pleasure. Hopefully in five years it will still be that way.

You've mentioned a few times about bringing Michael 'Elvis' Baskette in to produce the album. What was the reason behind that after self-producing the previous album, 'Kill The Flaw'?

We brought Elvis in to have a referee of sorts, someone to push us and make us try new things. Elvis and Jeff (the engineer) have a very good flow and way of doing things. Thankfully that system worked really well with ours. We needed the outside creative force.

'All I See Is War' is out now on Rise records.