Spock's Beard is arguably one of the bands that resurrected the Progressive Rock genre when they appeared in the mid 90s. After six successful studio albums they underwent a seemingly seismic change when main songwriter Neal Morse left. However, they reinvented themselves to great effect with drummer Nick D'Virgilio taking over as the singer and everyone contributing to the writing. When Nick departed they brought in Ted Leonard and carried on with alacrity. The merry-go-round continued with drummer Jimmy Keegan moving on and Nick returning to the drum stool. Fireworks caught up with bassist Dave Meros to get the low down on their thirteenth and latest opus 'Noise Floor'. 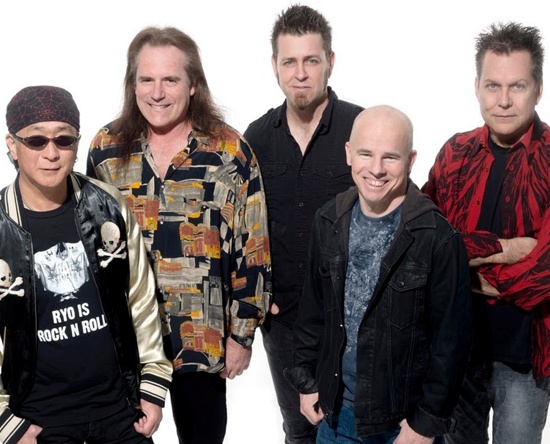 As a long term fan I've heard the band's sound change and move in a different direction whilst always retaining that certain something that says 'this is still Spock's Beard'. Do you feel this is the case and what have been the catalysts for this change?

I agree, no matter what we do it always sounds like Spock's Beard. Part of it is that by now we know how far we can push the limits as far as the various styles and basic band sound people expect to hear from us; and part of it is that we also go for what we like and I believe that's going to deliver consistency from album to album. That having been said, we don't want or to try and box ourselves in too much. I don't think it's ever really a conscious decision to go in different directions, it just happens organically.

My promo doesn't tell me the writing credits for the new album but the PR info suggests the tracks were written by individuals. Can you give me an idea of who wrote what?

Most everyone had their input and again we had material from our usual collaborators, John Boegehold and Stan Ausmus. John was actually responsible for four of the twelve tracks, 'What Becomes Of Me', 'Days We'll Remember', 'Bulletproof' and the instrumental 'Armageddon Nervous', and co-wrote the opening number with Ryo (Okumoto). Alan (Morse) and Ted (Leonard) did a couple of songs together, 'Have We All Gone Crazy Yet?' and 'Somebody's Home' and Ted did 'Vault' on his own. Alan and Stan did 'So This Is Life' and 'One So Wise' is a Stan solo effort. I nearly forgot the other instrumental, 'Box Of Spiders' which came from Ryo and he and Ted did 'Beginnings'.

I can't help noticing that Dave Meros writing credits are conspicuous by their absence, which surprises me when I look back at your superb contributions on the 'Octane', 'Spock's Beard' and 'X' albums. Is there a particular reason behind this?

Well, a few reasons really, but mostly I started to really dislike my own writing, and that pretty much destroyed the mojo. I also realised that now there are plenty of writers in our little circle I wasn't necessarily needed in the songwriting mode like I had been; in fact I don't think my style of writing is necessarily compatible with some of the other guys, so that also took away some of the motivation.

When someone presents a song to the rest of the band is it recorded in the form presented or is there room for others to suggest alterations or be given free rein to do their own thing when it comes to recording their parts?

It varies from song to song. Sometimes the song is 100% finished and the songwriter prefers that we all play the parts as they are on the demo. If those parts are all good we'll do as they ask without complaint. Other times one or more of us will get the instruction "this is just a guide track, please do your own thing, go crazy". Even when we are playing the part that was recorded on the demo we still have some latitude as far as injecting our own personality, adding or changing little bits here and there.

Were you ever all in the same studio at the same time or do you all record at home?

There were different combinations of people in the studio at various times, but we were never all present in the studio at the same time. I was actually never in the studio, not for tracking, mixing, or anything else for that matter. I live about 400 miles away so it's kind of a big deal to get me down there and it's really not necessary, so I was just here alone in my little cave basking in the glow of my computer screen for every aspect of it (laughs). If I had a couple different ideas for any particular bit I would send them to the songwriter to get his preference, and if I had any questions those would usually be answered by picking up the phone or sending an email. But by this stage in the band's history, after playing and recording together for so long the guys kind of know how I'm going to address a bass part and I know what they probably want to hear, so for the most part I'm left to make a lot of those little decisions on my own.

There are pros and cons to that method, but overall it works for me, and I think I get better results this way. I do miss the immediate feedback when tracking, like "which sound do you like better, this one (plunk plunk) or this one (plunk plunk)"? Or "how about if I do something like this here?" But years ago before I got my own little studio rig up and running I was always frustrated because I had to record bass in the studio when we were doing basic tracks, this is the time where the drum tracks are focused on the most, and bass was always treated as something that should be finished quickly so that we could move on to the next song. I would want to work on getting a different tone or maybe develop an idea, but after five or ten minutes everybody would be looking at their watch and saying "yeah man, that sounds awesome, let's move on to the next track". Here at home I can try four different basses and five different amp models and fool around for an hour getting a tone that is just used in the bridge section of a song, or waste an hour trying to create the best bass line ever written only to decide that the original way it was played is probably the best way to go. Or listening back to a track the next day and getting new ideas about a sound or a part, and being able to spend the time to go back and realise those ideas. So it takes me way longer to record my parts, but in the end I'm a lot happier with the results.

Also I have immediate access to every piece of gear that I own and it's all within a few feet of where I'm sitting when I record. That's a big advantage. If I think "hey, I think this song needs that Fender P-Bass with flatwounds" or "this section might sound great with a fretless bass", they're all right there.

What's the idea behind the two discs?

About a year ago, after listening to maybe fifteen or twenty demos of song ideas, we chose twelve songs to record in the studio. It's difficult to predict how everything is going to eventually fit together, so after all the recording and mixing was finished we started trying to assemble a cohesive album. It felt like there were eight songs that made a really strong, consistent album when presented together, and four that were a little outside of the stylistic range. We really loved those four songs though and didn't want to abandon them, and they were already recorded and mixed, so we put them on a bonus disc.

We've made the mistake in the past of just putting everything on one disc. The example I always use is our self-titled ninth album. If we would have done what we did on this album, with a main disc and a bonus disc, I am sure that would have been a much stronger album in the critic's eyes. So we learned from our mistakes and I think the last two or three albums have been much stronger because of it.

I understand that with Nick D'Virgilio's busy schedule it's likely to impact the band's ability to tour, is that the case? Have you got any ideas on how to get around this?

Yes, we have a drummer lined up to do any future touring. He's awesome, and you probably know of him, but we've agreed to not introduce him until we announce our tour, so my lips are sealed for now (laughs). We're in the beginning stages of planning a Europe/UK tour in either late November or early December, so stay tuned for info on that. We're also playing the 'Cruise To The Edge' in February.

On a slightly different note, you've performed on cruises and at Moresfest where you've teamed up with Neal Morse again. How has that been for you all?

It's always awesome, we love it. It's like a family reunion when that happens, especially at the 'Snow' show at Morsefest where the entire Spock's "family" was there, all seven past and present members of the band. On a personal level, Neal is more than a friend and colleague to me, and more than an amazing musician that I look up to. I always worked as a musician and got some very decent gigs along the way, but Neal is the guy that created the music that allowed me to develop my own persona and carve out a bit of a niche for myself, so for that I am very grateful. I guess I'm getting a little off track here, but what I'm trying to say is that I'm always happy to see him. He has a real vitality on stage that is very contagious, not just to the audience but also to the band.