Although only known to a select few in the UK, Blue October have enjoyed a long career which has seen the Alternative Rock group achieve million-selling success in their homeland of America. Vocalist Justin Furstenfeld form the band with his brother Jeremy in 1995 and while the singer has struggled with depression, self-harm and suicidal thoughts throughout his life, he found salvation in his music. Fireworks talked to Justin about the band's ninth studio album 'I Hope You're Happy'. 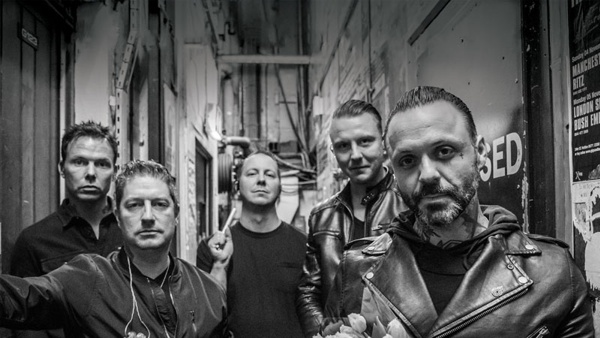 I've been listening to the new album and something struck me about it, which is something that rarely happens when I review albums. It doesn't sound like anything else I could think of, so where do your songwriting influences come from?

I'd have to say I like Peter Gabriel, The Smiths, The Cure, things like that, but I like a lot of old Jazz like Dave Brubek and Ella Fitzgerald, plus I enjoy the art of Urban music where you basically just have a beat and a hook. So I take elements like that and just pile it all together. I don't understand why people don't mesh genres together more these days. Everyone seems to define themselves as Rock or Rap or Alternative. I want to know why you can't just mesh the beautiful parts of each with each other?

You write the bulk of the material in the band, often drawing on your own experiences with depression and anxiety, so what is your process when writing music for Blue October?

It's different, sometimes I'll write music and then write lyrics to fit it. Sometimes I'll start with a melody in my head, if I'm walking down the street sometimes I can come up with a fully formed song in my head, I've always been able to do that. I also like to be inspired by other people's lives. A lot of my songs were written about me and things I was going through, but I'm listening more to other these days, to write about their experiences. Sometimes I'll sit and basically interview them as if I were doing a piece on them, just as you are with me now, then just write as much as I possibly can and as honestly as I can.

For this album it was fun because what I did was take little pieces of music and chop them up and use my MPC drum machine to create a track I could give to the rest of the band to play over. We wouldn't necessarily all be in a room together and rock out like we've done in the past, these songs were done more rhythmically. Instead of Jeremy setting up his full kit, I'd have him just play the kick drum until I had the microphones placed right and the sound I wanted, then he'd come back and play the snare pattern. We pieced the tracks together like building blocks.

When you mentioned putting a hook in a song, you certainly achieved that with 'Your Love Is Like A Car Crash'. Usually I don't make my mind up about something until I've heard it at least three times, but with that one, after one listen I kept singing it.

Oh, that's my favourite song on the new album, I'm so glad! I appreciate that.

That one and 'Colors Collide' were my two favourites – the latter because it was darker and heavier.

So you've gravitated to two opposite ends of the spectrum with those two, which is exactly what I like to hear. That's made my whole day better!

How long did you spend making this record?

It's hard to say, because I write all day, I'm obsessed with writing music, this album is only just coming out and I'm already writing the next one. I love writing music, getting re-inspired, I never want to go on a hiatus. When I put a single out, I already want to have the next one ready. These days people's attention spans are short so I'm always working on the next thing.

I wanted to talk a little about the band's back story, because Blue October were new to me, even though you've been around a long time. I was reading your bio and it said Kid Rock's manager spotted you playing live, and you ended up touring and playing over three hundred shows before a label signed you?

Yeah, that's right and that was an eye opening experience! (laughs) We were playing at a seafood restaurant in Houston, Texas and I was really upset about it because I didn't want to play for people while they were eating their shrimp, I thought my art was way too deep for that! (laughs) These days, I'll play for anyone, I'll play in a grocery store, I don't care. But this guy was out there and he said "Next week I'll fly you to New York" and I thought "Whatever..." but he was Kid Rock's manager Michael Rand. He helped us get signed to a label and the rest is history.

That's a really old school way of getting a record deal, that was how bands used to get signed, by being spotted live. Most bands send in demos, you did it almost like a 60s or 70s act.

Yeah, this was back in 1999, the band was formed in 1995. So it was back when you could sell a million records, put out vinyl and CDs and people could buy them from stores, labels gave you tour support... so we got signed by Universal, then dropped by Universal, then re-signed to Universal, now we run our own label and do it independently.

Yeah! You have to think of the music business like this, instead of being a jaded artist complaining about how you got dropped, think about being like a shoe company, if you make a shoe that doesn't fit people's feet, then you can't sell it, right? So you need to man up, realise that music is a business, people are investing a lot of money in you and if you aren't selling records, they will let you go. When they dropped me I didn't think 'Oh my God, I'm broken'. I thought, 'Okay, how do I get back? I'll have to make music that people will like better'. So I got myself back in the studio and tried my hardest to write music that fulfilled me but would also be the most universally themed music I could. As a result, the people that dropped me heard the new stuff and re-signed me, which is great. I only sold them 15,000 units last time. I want to sell 1,000,000 units. And I knew the team, I thought they were good people, I just made the wrong kind of record.

Well this approach clearly worked, because when you released 'Foiled' in 2006 it was huge, you had hit singles, you were on Jay Leno and Jimmy Kimmel's shows, the album did sell over a million because it went platinum in the US and you opened for The Rolling Stones!

We all wanted to win. It's like a marriage, if you have a period where it's not going so well you might take a break, but then you realise how much you love each other and both go the extra mile and work extra hard to make it work.

You're not on a major label now, you have your own. Were those past experiences the catalyst to make you think you would be better off doing things yourself in today's music scene?

Actually, the reason we started our own label was because in America, everybody does what's called a '360' deal now. Because people don't buy records like they used to, the label has to figure out ways to make more money, so they take 20% of your publishing, 20% of your merchandise, 20% of your touring, and then they take 85% of your album. I said no because we've been touring for so long, most of our money comes from the road and I wasn't prepared to give up that cut. So we parted ways but it was amicable and respectful, I still talk to the people at Universal all the time. It's taken a while to grow our label and now we're close to being able to compete, but it was tough. We are the underdog, but I love being the underdog.

And having your own label gives you more control over not only the music but how it's distributed?

It's complete artistic freedom, if I want to go and try something I can just go into my studio and do it, I don't have to ask for permission or ask for a bank loan to hire somewhere. I can do it myself and put it out, which generates an almost instant return, which I put straight back into Blue October. Then we can make another video, push another single on the radio, that kind of thing. I can also make sure we dot all the i's and cross all the t's, when you're on a label and somebody else is working on something, you can't always be sure of that. Songs are two minutes and thirty seconds long these days, it's aimed at a short span streaming audience to make as much money as they can out of it, which is smart if you're a major label. But when you're like us, a band that's been around over twenty years, you have to constantly recreate yourself, do what you can to get on the radio, put yourself out there.

You've had great success in America, but you do play over here in the UK. Will you be coming over to support this album?

Oh, of course! We played some shows there in March and we'll be back in February next year, we can't wait.

How many new songs are you planning for the set?

All of them? Really?

That's why I only put twelve songs on the album. We look to play twenty-five songs in a set so we can do the whole new album and still play the stuff from the past. I want to play new stuff, we have done nine albums and have published over a hundred songs, so the set is a problem. I've given the band more input in that and tried to relinquish some of the control issues I have. (laughs)

As well as being the creative force in Blue October, you paint, you've published a book of all your lyrics and now you have a documentary coming out.

Yes, it's almost done, we've been working on it for six years but every time I want to wrap it up something beautiful happens like I have another child or we open another door in our lives, things just get better and better and better. We really want to wrap the documentary perfectly, we've got an hour and a half done, we're just working on putting a suitable ending to it. I'm super proud of it because it's not just about 'how cool Blue October is!' It's a serious documentary about how serious the disease of addiction is and how beautiful second chances, positivity and surrounding yourself with love is.