Ace Frehley is quite rightly seen as a legend within Rock circles, not just because of his time in KISS but also as a successful solo artist, with a sound that is immediately identifiable. Ace has had a busy last couple of years what with his appearances at former band colleague Gene Simmons' Vault Experiences and Paul Stanley guesting on his previous solo album 'Origins Vol 1'. Now with a brand new solo album in the bag, 'Spaceman', as well as a solo Japanese jaunt, a spot supporting The Gene Simmons Band on a trip down under, and most tantalisingly of all, a guest spot on the latest KISS Kruise, there was plenty to talk about when Fireworks put in a phone call to Frehley Towers to discuss his recent flurry of activity. 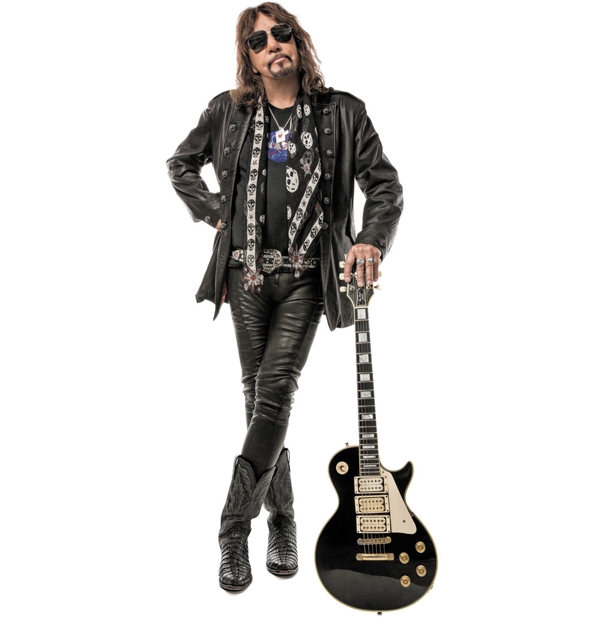 Congratulations on the new album. I've had the opportunity to have a good listen to it, and it's probably your most cohesive release for some time. Could you expand a little on how you set about the recording?

Well, it's basically the same formula I used on my '78 solo album; it worked then and it seems to have worked again for this album. I just work with an engineer and a drummer and then I play pretty much everything else myself. My engineer Alex Salzman ,who's worked with me on my last four albums, has been invaluable and has helped mould my sound.

It also has a sense of you recapturing the sound from that classic '78 solo album, is that something that was a conscious decision?

My intention was to make it very much like my solo album from back in '78, but as a conscious decision... hmm, maybe yes, but it all came together very smoothly and easily.

The album has an aura of being autobiographical in places. I'm thinking of songs such as 'Rockin' With The Boys', 'Without You I'm Nothing', 'Bronx Boy' and also, although a cover, 'I Wanna Go Back'; that last one to me at least hints at feelings of some possible regrets. Even the album title itself alluded to your past ... a deliberate move?

Yes, I would say that certainly about 'The Pursuit Of Rock n' Roll' and 'Bronx Boy', but generally speaking no, these days I live very much in the now and look towards the future. The past is the past, and as the title of my book says − 'No Regrets', but I'm really proud of the whole record and especially pleased with the cover version I did of the Eddie Money song, 'I Wanna Go Back'. I discovered it on YouTube and told my fiancé Rachel, I just gotta do that song; I just loved the melody and lyrics, and most importantly its message. The original featured mostly saxophone and keyboards but I took it apart and reworked it in my own style.

When recording albums these days have you embraced the digital age or are you still old school?

Well Pro-Tools and digital certainly make it easier from a recording point of view, but I like to have a mixture of old and new when I record, ...old amps, old guitars. I'm trying to achieve that vintage sound while using modern techniques, and I think I've done that with this album.

Are all the songs on the new album recently written tunes, or are there any that come from some time back, as some of them seem to have a real feel of your time when you were in KISS?

They're a cross-section really. Quite a lot of them are new songs and some are from the distant past. 'Rockin' With The Boys', for example, is a song that I wrote back in the 70s. I liked the chorus to it, but was never happy with the verses or the bridge to the song so I left it, but I had another crack at rewriting it again and I think it's come out great this time.

You've worked with Gene Simmons on this album. What was it like to sit down with him again and write a couple of songs?

Working with Gene again was great, it seemed like all the times from the past just disappeared. We really know each other so well. In fact back in the day we used to room together, and we had some pretty interesting times I can tell you!! [Laughs]. He actually came down to my house for the recording and the two songs we did together we did in about three hours! It was like time had almost stood still.

Expanding on the idea of working with Gene, you recently joined him at a few of his Vault Experiences in the US as well as the recent tour of Australia, what was that like?

We had a lot of fun. I opened the show for Gene, then Gene played his set and then I came on stage and hung out with the band and we ended up playing 'Rock n' Roll All Nite' and 'Deuce' and it all felt really good and natural.

You've also recently toured Japan on your own too. How did that go?

That was a lot of fun. I took Rachel, my fiancé, who'd never been to Japan before, but it was a very hectic schedule. I was doing two shows a day, eight shows in four days, but it so, so worth it. The Japanese audiences are always great to me. I really don't know how I did it all in such a short space of time [laughs].

With regards to Gene's Vault, over the years, you yourself must have accumulated a fair number of demos and unreleased songs. Have you ever contemplated doing something similar?

Yes, I would like to do some similar, a box set maybe, but it's so complicated. I have probably a hundred reels of 2" tape down in my studio in Connecticut. I've also got demos on old reel to reel tape. It would be a real undertaking at this point in time, and right now I'm so busy doing other things I really don't have the time. But yes, it's something definitely worth thinking about for the future.

Later this year you're taking part in the now Annual KISS Kruise. There will of course be speculation from the KISS community about that much dredged up word, 'Reunion'. Any thoughts on that?

All I will say on the matter is if it was presented to me correctly, who knows? I'm the type of guy who says, 'Never say never.' I like living my life one day at a time right now, but we'll see what happens. Let's leave it at that shall we?

After all this activity what's next? A UK tour would be nice, or is back to the studio for 'Origins Vol 2'?

As regards a UK tour, I'd love to, it's just that the right offers haven't presented themselves and I have a lot going on right now, so it would be a case of trying to fit everything in. But yes I'd love to get back over there to see you guys. I've just moved into my new house and I'm busy rebuilding my studio there and once that's done I'll be starting on 'Origins Vol 2' ... once I get the promotion for the new record done that is, I'm travelling to all points to get the message out there! With 'Origins Vol 2', I really hope to get started on that. I haven't had any real thoughts on the songs I want to cover yet, there's so much to choose from. I'm also working on a second book right now too, but I've no idea when that will appear, it'll happen when it happens!!

You've been quite open about your age in recent interviews. Do you have a particular regime nowadays that allows you to keep up with what is a fairly demanding schedule?

[Laughs] No, not really. I think I'm in pretty good shape these days to be able to do two 70 minute shows a day!!

You've been playing music now for nearly 50 years. Is there anything left that you want to do that you haven't already done?

You know, I'd love to score a movie and produce other bands maybe, but ultimately just share the knowledge that I've accrued throughout the years working with some of the great producers and engineers. With regards to films, maybe get Scorsese to direct a KISS film [laughs], after all he was a Bronx boy just like me. Growing up in New York back then was an education. There's that old saying, 'If you can make it in New York you can make it anywhere.' That certainly rings true for me you know.