One of the most interesting and distinctive bands of our generation, JETBOY was founded in 1983 by Billy Rowe and Fernie Rod. The inventive group was destined to be cult band with their brand of Blues, Punk, and Metal infused grooves along with such an edgy look. In the eighties there weren't many Hard Rock acts that had a front-man sporting a Mohawk among the sea of teased locks of their glam peers. However, JETBOY broke through with their Pop hit 'Feel The Shake' which flooded the airwaves and MTV, leading to the status they deserved. It is obvious that the band has always been aware of Rock, Metal, Blues and Punk history, yet managed to come up with their own distinct style. This has been evident throughout their career and continues today with their upcoming new album, 'Born to Fly'. The album was arranged by the band's core of guitarists Billy Rowe, Fernie Rod and vocalist Mickey Finn, alongside former faster Pussycat bassist Eric Stacy and drummer Al Serrato. This will be the first completely new material from the band since 1990. 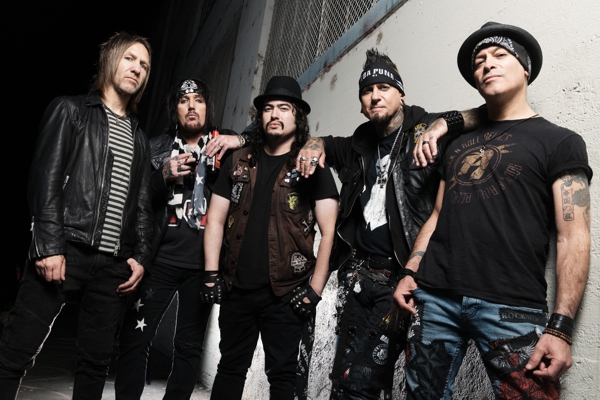 Throughout the career of Jetboy, the band stood out from other Hard Rock bands due in part to having an edgier sound and look. Is that the direction you intentionally went in? In your opinion what was it that made you stand out?

From the beginning Jetboy was always about being a straight-forward Rock n' Roll band; it wasn't intentional it was just what we were into. Looking back it is kind of what gave us that edge over some of the other bands from our era [the 80s]. From the start, Jetboy always stood out by a) having a singer with a mohawk and b) having a bit more of a Punk vibe and edgy sound for the scene we came up in. We definitely stood out. In 1987, with all that was going on in the music world, a lead singer with a mohawk was still shocking. We always did feel it gave us more originality and helped set us apart from other bands.

Looking back on your career do you think you have changed that much, your fashion sense or musical style?

Well, I think we all change as time marches on. But I feel once Jetboy found its style we stuck to it. We've all grown as musicians and songwriters, but have kept that organic Rock n' Roll feel and attitude. As for our fashion, I'd say we are definitely a bit more stripped down and not so glitzy.

With writing 'Born To Fly' were there specific thoughts and concepts you had, or was it a fluid process?

The writing and recording for 'Born To Fly' was very fluid. The whole process came very easy for all of us. It flowed so naturally and was a lot of fun from beginning to the final mix. It felt as if it were meant to happen exactly as it did. We had no concept, we just wanted to write what we felt would be a great new Jetboy album. We pretty much just started writing songs. Lyrically, Mickey took on each song as its own. His lyrics are really great on this album.

Can you give me a brief sketch of the album's storyline?

Well, our singer Mickey Finn could say more on this since he wrote all the lyrics, but the album touches on a variety of topics. For me it feels like a very strong Rock n' Roll album, like some of our heroes released from the 70s and 80s.

The tracks 'Beating The Odds', 'She', and 'Party Time!' sound similar lyric and vocal wise to early Jetboy Hard Rock songs. While other tracks on the album sound more heavily influenced by seventies Blues Rock. The album definitely has a classic feel.

Mickey has a style with the way he writes lyrics. Though he has grown a lot since the early albums, and 'Born To Fly' is proof of that, we're all very influenced by 70s Rock, so it's a natural thing for that to come out in our writing and how the songs end up. We wanted to make a great Rock n' Roll record, something we feel is a bit of a lost art these days. We did not plan anything out, we just wrote the best songs we could and kept it very straight forward with good riffs and catchy melodies!

The title 'Born to Fly' along with the worn jacket cover art calls to mind images of the determination, longevity and triumph through strife. Are these elements symbolic of the bands journey?

I've never thought of it this way, but I think this is a cool way to look at it knowing the band's history. Jetboy had a very up and down journey, more downs than ups I'd say? So I feel we all had a lot to say with this album. The worn album cover art was us wanting to keep it simple and focus on the songs.

When you wrote songs for 'Born To Fly' did you take past successes or failures into consideration or does that even factor into the process at all?

That doesn't factor in really. But maybe in some way it did? When we began writing songs for the new album we just started writing songs. The process was a little different than how we wrote in past because we all live in different places now. So I would write the music for a song and send it to Mickey, and he then would write the lyrics and melodies. We did this for every song on the album. Then we demoed the songs and added every little detail down to the exact drum parts, vocal harmonies etc. Then we went in and recorded it all as a band in a live room all together.

When you went back and listened to the songs, did any of them surprise you? In either a good or bad way.

After listening to the finished album all we can say is how happy we are with how it turned out. I don't think any of us knew it would turn out so good. We would really love it if 'Born To Fly' was recognised as one of the best straight-forward Rock albums to come out in long time. That would be amazing!

Any upcoming tour plans? If so, do you know which city or venue will kick it off?

No tour yet but we plan on getting on some once the album is out. We have a few club dates starting in late December thru January. Then, for the first time, we're doing the 'Monsters Of Rock' Cruise in Feb-March of 2019.

The band was driven to get this album out, play what they felt in their hearts, and please both old and new fans alike. The material is personal and full of thought with a blend of stripped down edgy Rock and traditional Blues. Without even being aware of the band's history and struggles I'm sure that all who hear this adventurous new album will relate and be inspired as I have been. JETBOY has been and remains a phoenix that rises from the ashes.