Red Dragon Cartel's new album 'Patina' is about to hit the streets. Featuring Jake E Lee on guitar, who as you will know has a very impressive CV, this album is a real throwback to how Rock records used to sound. Fireworks talks with Jake at his Las Vegas home about the new album, its in your face attitude, what's behind its odd title and why being a proper band is a very important thing. 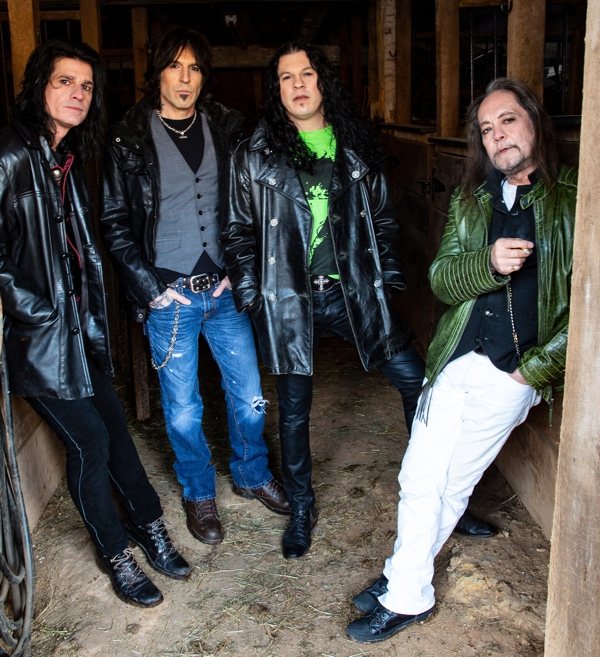 This new Red Dragon Cartel album has certainly reminded me a lot of Badlands. Was this intentional when you wrote it? To go back to that kind of Blues Rock Badlands were famous for.

No not at all. I didn't have any thoughts of Badlands in my head when I wrote this album, but I understand what you mean. A lot of people online have been referencing Badlands on our video comments section but definitely there was no conscious thought behind writing it that way. I think what people are hearing, apart from the fact that I wrote the music for both bands, is the process behind the writing. The first Red Dragon Cartel album was, shall we say, a piecemeal affair, with this singer brought in for this song and that drummer brought in for that one, you know. So that album had a different feel to it and didn't really sound like a band. This new record sounds like a band though. Just like those albums this Red Dragon Cartel album was done with the band all in the same studio at the same time. Then we'd work on the songs from there and put the music together that way, just like we did for Badlands. Also the production on the first Red Dragon Cartel album was by an outside producer and it sounded good, but smooth, if you get my meaning. This album is all us and it's a rawer sound which I've always like better for my music.

There's a real groove to the music, a real attitude to the songs, a kind of "go fuck yourselves if you don't like it" thing going on. Was this what you were aiming for?

(Laughs) Yes, I think so, yes. I've always kinda been that way. Not in Ozzy's band obviously, I was a hired gun but when making my own music yeah, there's that attitude and groove you mentioned. But when you're the boss of your own band you can have that attitude about what you do. That, I don't give a shit thing, although you do give a shit but yeah I get what you mean. I do read all the comments people post online about us, good and bad, and I do take on board a lot of what our fans say, but in the end it won't change how I write and play my music. You have to be true to yourself.

So apart from the attitude, what kind of album would you describe 'Patina' to be?

Good question. If you take, say, the last song on it, 'Ink & Water', it has a Doors Jazz thing going on. Then it goes into a Dick Dale Surfer Rock riff and then there's some 70s Rock in there and then a Johnny Thunders solo; and it's this mix of styles that as a musician keeps me interested. What I like to do is throw in what I call seasonings, I love to add different things into the musical mix: Jazzy parts, weird time signatures, you know, stuff like that. The album is, of course, a Hard Rock album but these seasonings keep the songs sounding fresh and add something to the music. I hope this doesn't scare people off who say to themselves, "Oh no, Jake's done a Jazz record." We haven't, we've just added things that help to make this album and its music more interesting for ourselves and I hope for everyone else.

The dictionary meaning of Patina is 'a thin layer that forms on the surface of copper, bronze and similar metals'. It's a strange title for an album...

It actually came from Anthony, our bass player, who loves to get his hands dirty fixing things, and he watches those shows where you get an old thing and repair it. He comes into the studio one day – which is on his ranch – and says "I'm so sick of the word patina! It's patina this, patina that on all those shows and if I hear it one more time I'm gonna shoot someone." And I knew right then we had to call the album 'Patina' [laughs]. Also, when I was in Ozzy's band I was this new shiny piece of bronze, say, and over the years since then I've matured and grown as a person and musician, so this patina has rubbed off on me.

How long did 'Patina' take to record?

Actually what happened was after the last tour, when Anthony took over as our bass player, he asked, are we going to do another Red Dragon Cartel album? And to be totally honest I didn't know if I had it in me to make another album, I really didn't. So he suggested that we come to his ranch studio and get the band together for a week or so to see what would happen. He knew that if we did do another one, that I wanted it to be more organic, more old school. So we got together, I had no pre-written stuff, and what we did is what you did in the old days, which was have a few guys jamming in a studio to see what you could come up with. After a few days of doing it this way I knew we had something. All I did say to the guys then was we have to do this to the best of our abilities, because if we do, I'll be happy. So I treated this record as if it was my last one, which who knows it may well be, but I wanted to make the songs as good as I could and not just a lot of 'that'll do' songs. There was no settling on the album, so that's why this album took us a while [laughs].

How did you persuade the Legendary producer Max Norman to help out on the album?

I didn't persuade him. To be honest, I'm not a big social person, I'm not anti-social, let's get that clear, but what I mean is I haven't really kept up with everyone over the years or stayed in contact with them. I've never fallen out with anyone who I've worked with but as the years go by you lose track of people. So we're in the studio and Anthony, who is very social and keeps in contact with everyone, was one night talking on the phone and said to me, "Hey Jake, do you want to say hi to Max?" I say Max who? He says Max Norman. So I go yeah, and I hadn't seen or talked to Max in around twenty years. So we had fun catching up and he asked what the new songs sounded like and I said you should come over and listen to them. He only lived about an hour or so away in New York, so he hopped on a train and came to the studio. He loved what we were doing and we realised that Max had broken my recording cherry with 'Bark At The Moon' and he'd done the same thing for Anthony with Lynch Mob's first album. So to have him like what we were doing was great and we knew we'd love for him to help us out. And let me tell you ... should I? Yeah, I will. He did it for us on the cheap, friend's rates [Laughs]. I mean he probably blew off some really well paid jobs to work with us, which says everything about the man.

So finally what about the touring side of things. When can we see Red Dragon Cartel on stage again?

Well I've decided that when we tour this time it's just going to be Red Dragon Cartel songs. Before when we toured, to flesh out the set, we did some Ozzy songs but I always felt we were cheating ourselves and the fans. Don't get me wrong, those Ozzy songs are all great songs but now with having two Red Dragon Cartel albums to choose from – and we can play the whole of this new one straight off – I don't think we need to play covers anymore. And if we had to add an older track in, I think I'd go with a Badlands one now. But the actual tour, well we're working on it now but the market out there for people and bands like us isn't great. In fact I'd say it's worse now than four years ago. And let me say this, I have never done what I do for the money, I do it for the love of music but I also have to be practical and I don't want to do a tour and lose money, no-one does. So we've managed to put on a five or six week tour for February in the US, then it's off to Japan for a week or so, then hopefully instead of going home to the States we'll be able to come to Europe for a few dates. This isn't written in stone so keep a watch out for us – if we can we'll definitely be there.