Getting any new band project off the ground can be a challenge, especially with the number of new releases hitting the pavement on a daily basis seemingly on a never ending upwards spiral. Just being great at what you do won't cut it anymore, you need to have something that will fire the imagination of potential listeners from the off, and then keep them interested enough to want to hear more. 'Under The Radar', the debut album from Signal Red does just that. Fireworks recently caught up with Lee Small and Steve Grocott... 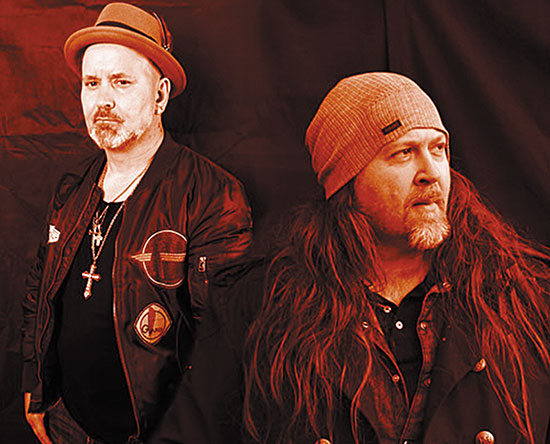 After his former band Sevendayz imploded, guitarist Steve Grocott found himself disillusioned with an industry where the odds seemed increasingly against him.

"Despondency had started to set in," Steve explains, "so I decided I needed something to get stuck into outside of my comfort zone. I'd heard of Lee from the Shy album, so I just acted on impulse and contacted him asking if he needed any guitar parts doing for any future projects. Thankfully he got back in touch and we started talking ... simple as that really. He sent a few of his tunes over for me to add some rhythm and lead parts, which I did. Complimentary comments came back so it was clear from the offset there was a musical connection."
That was back in 2013, so getting Signal Red off the ground has been a somewhat protracted affair to say the least.

"I guess other things just got in the way," laughs Lee. "We did record some demos that we didn't use in the end, but the most important thing was that we connected, bounced off one another musically speaking. Steve then got the gig with Ten, and I was doing various other things to keep the wolves from the door, so yeah, this record has taken a while to see the light of day."

"Yes, between writing I went out on a limb and auditioned for Ten," adds Steve, "and was fortunate enough to get the gig. Obviously I had to shelve writing with Lee for a while as I had to learn the old Ten material and write solos for what would've been the 'Albion' album. But before you knew it another Ten album appeared, so I had to concentrate on that. Lee was also very much in demand, so it was a case of whenever time was available really. It has its benefits though as it does allow you to really analyse what you've recorded and get it right."
Bouncing ideas back and forth between the two of them in between other commitments, they eventually had enough songs to represent their shared vision for Signal Red.
"We started work almost immediately after I'd completed work on Lee's stuff," Steve confirms. "I just kept it simple initially and started to write and construct the music leaving space for the vocals. I did have melodies in my head, but it's weird because Lee would almost anticipate what was needed. Sometimes they would come back sounding almost as I'd envisioned, but others they would be completely different ... it was kind of exciting really. After a while though you just learn to play to your own strengths and weaknesses, so I'd get the music to where I was happy with it and then send it on to Lee."

"Steve would sketch out the rough musical arrangements," Lee continues, "and then send them over to me. I would work to those to get a structure in place for the melodies and lyrics; then I would move on to the next one. Once I sent my versions back, Steve went above and beyond crafting them into what you hear on the final versions. I love to hear how a song grows, that's a really rewarding feeling. He's created his own sound on this album; there's some orchestrated guitar work and I think you can pick up on different things every time you listen."
Given that the songs were pieced together over an extended period of time, the whole thing – music, lyrics, packaging and even the Signal Red name (a label suggestion) – have a cohesion that suggests it was planned that way from the off.

"I can't remember exactly when we started," says Steve, "but I would just forward Lee a tune or two and just wait for him to work his magic ... these tunes kept coming back sounding amazing. When we were at around song six or so I contacted Escape Music and asked if I could forward some demos to Khalil who liked what he heard and signed us up. Around six months after that we had enough material for the album. There was no grand plan, I just got on with it and whatever it sounded like, it sounded like; I did want it to have a modern edge though. There are some real rockers on there as well as ballads, but we have tried to stay a little outside of the box. We just put our collective influences into a bowl, gave it a stir and listened to the outcome."

"I think the overall sound we achieved comes from his style of playing," Lee offers. "The layering of guitars in the way he has done on the album is very interesting not to mention complex at times, but the more you listen, the more you understand and the more you hear. Musically speaking it takes you on a journey without the need of my lyrics to help paint a picture; your imagination does the rest."

Originally Signal Red was just the two of them, but at the suggestion of the label, Brain J Anthony and Dave Anthony were brought in to give the project more of an authentic band feel.
"Originally, I played all the instruments bar the drums, which were programmed. I also drafted in Darrell Treece Birch from Ten to help us out on keyboards, but Escape suggested we might want to replace the drums and bass. They said they could have released it as it was but they wanted to push it further, which was good. Khalil put me in touch with Brian J Anthony, a bass player/studio engineer who had just finished recording the new Steve Walsh album. It was a bit of a learning curve sending sessions over to the other side of the world that were mixed to a degree already, but it all worked out well in the end. Brain suggested David Anthony for drumming duties which I'm glad he did as he's currently the metronome of choice for Dennis De Young. Brian asked me if the drums were to be played as I had programmed; I basically said yes but you can run with it if he's on a roll so to speak. I didn't want to go too mad with drums as I still wanted people to know which bit to tap their foot to!"

Frustratingly, most of these collaborative projects tend to be one offs, but I have a feeling that Signal Red might turn out to be more than that.

"It would be great to take it on the road," Lee muses, "but it's down to everyone's schedules and logistics etc., who knows, watch this space! The way we work together, I really can see us doing a follow up at some point if we are still in the business; the chemistry is there for all to see."