Right from the start, I have to admit knowing practically nothing about the Butcher Babies. Other than being fronted by two attractive females and being a band that I had so far never seen before, my knowledge was pretty scant. I did check out some footage on YouTube, to which my initial reaction was "ah, okay". Maybe not my kind of music, but interesting to watch to say the least. Therefore, off to Sheffield I went, fortunate that it hadn't snowed any more and the roads were fairly okay. 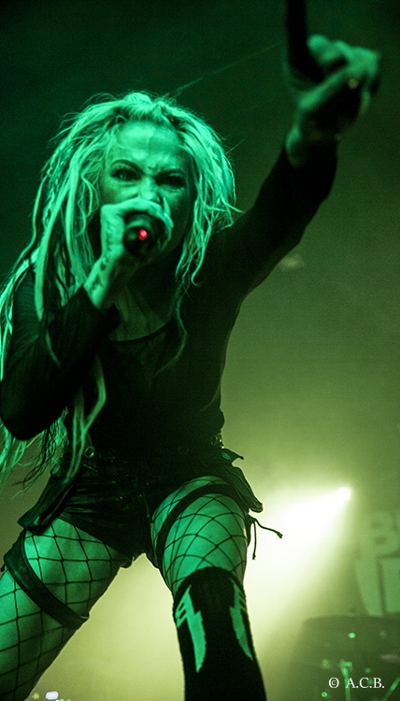 However, the traffic was still fairly slow and due to that and other hold ups, we unfortunately missed opening band Klogr so my apologies to them, this meant that the first band for us was Eyes Set To Kill. They were once again female-fronted and the picture on the venue website showed the band with two female vocalists, but tonight we only appeared to be blessed by one, namely Alexia Rodriguez (who told me afterwards that her sister, Anissa, is no longer in the band). They weren't bad, but my overriding thought was that they were not dynamic enough, especially considering who they were touring with. They did do a decent cover of The Cranberries' 'Zombie' in tribute to the recently departed Dolores O'Riordan, which unfortunately was the only thing I knew. As the lady next to me said, 'I've seen worse.'

It was then time for the Butcher Babies. Despite the fact I had checked them out on YouTube, it was only a brief check, so I didn't really know what to expect and actually they turned out to be not as bad as I thought. It would be fair to say that the whole concept was more visual than aural as the two ladies (and I swear that I did not know they were ex-Playboy models) dressed interestingly, and I feel that this is the major draw, although there was a large female attendance. This was sort of backed up by the fact that both girls had raised platforms to stand on to ensure everybody got a good look. To me, the vocals were a bit too scream and screech, but having said that, they did seem low in the mix which may have made things better... or not. In truth, quite a lot of the music was okay and it was created by just three members on guitar, bass and drums, and on 'Thrown Away' (which is a really good song and the nearest thing to a ballad) the girls sang very well which proved they do have decent voices, despite the screeching (this happens a lot these days). 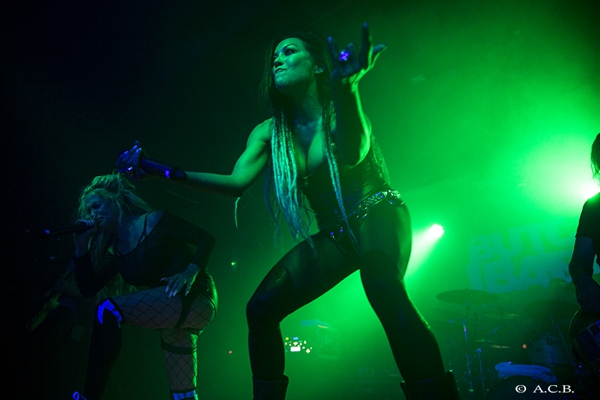 One song I did recognise was their version of Napoleon XIV's 'They're Coming To Take Me Away' which was a bit of a surprise amid the mayhem. That mayhem intensified a couple of times as the silly people whirled round in their hurricanes of mosh pits. This started with 'Beer Drinkers' (where we were told that Carla Harvey needed lots of encouragement to drink a shot of something handed to her, but I don't think she did really, and which also incorporated a drum solo) as members of the crowd knocked everyone else out of the way which was a bit dodgy in such a small area. During the second such occasion, Heidi Shepherd jumped off the stage to stand in the eye of the hurricane. The main set ended after approximately fifty-five minutes, which I thought was a bit short, but they came back on and did another four numbers before they departed. 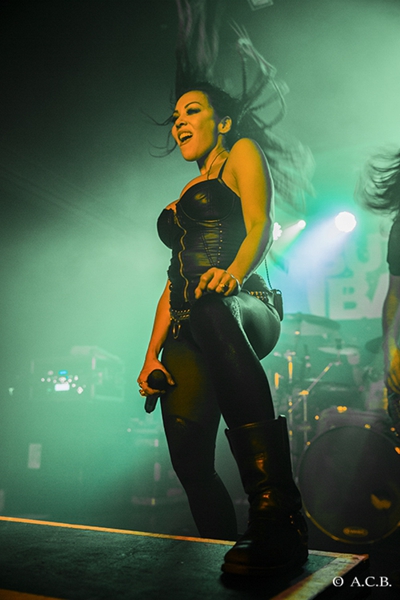 I am not sure what I thought at the end. I suppose I view it as a bit of fun escapism where the music is probably secondary to everything else, which is a bit of a shame really.

Review and photos by Andy Brailsford