Shinedown's last album, 'Threat To Survival', proved something of a disappointment; experimental, raw and a departure from the usual Shinedown sound. Latest album 'Attention! Attention!' goes some way to returning the band to a sound that is perhaps more familiar. Fireworks caught up with guitarist Zach Myers to talk about the new release. 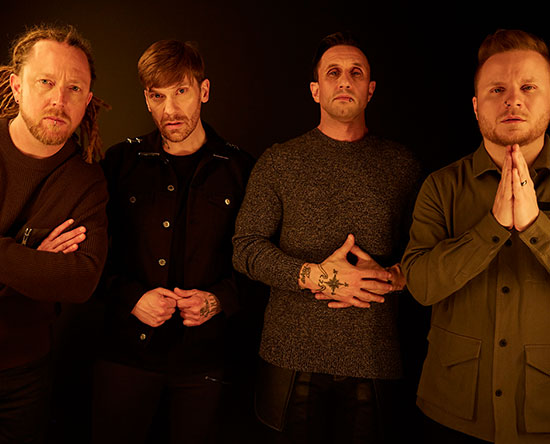 The new album, 'Attention Attention', is a concept album. Where did the idea come from?

"The concept involves all four of us at times and at others just one," Myers explains. "It's odd really, but it tells a story of what the band has been through over the last two or three years. It all takes place in a room and in your mind. It's about a person who starts out in the darkest place that you can imagine ... they're in a hole and have to figure how to get out of it." Something that seems to follow with 'Devil' and 'Black Soul' at the front end of the album and 'Special' and 'Brilliant' bringing up the rear; negativity to positivity. "Each song has individual meaning," he continues, "but you have to listen to the album as a whole to get the bigger picture, where the bad place becomes replaced with euphoria in a song like 'Brilliant'; the person realises that there's a better day tomorrow. This isn't a classic concept album like 'Dark Side Of the Moon', it's more the transformation of people or persons."

"We didn't consciously write a concept album, but the songs seemed to tell a story. If you change the running order then the story gets lost and that story was obvious when we had all the songs there at the end of the recording process; a kind of dark, negative vibe to a more positive one, with the story being told in the songs. We became aware that a story would be evident to anyone outside of the band and they could interpret it how they wanted to, relating it to their own lives. I wouldn't want someone to tell me that a song that had meant something to me all my life regarding love, life, misery or whatever, was really about an ice cream truck. I like to think that on this album the story is hidden in plain sight. As for the mind-set, I think we did approach this record differently. Our benchmark album was 'The Sound Of Madness' and I think we consciously wanted to go back to that way of thinking."

Myers, like many Shinedown fans, appears to have reservations about 'Threat To Survival'.

"Look, I love that record," he shoots from the hip, "But I'm not sure that it was really a completed thought. We liked the songs enough to put them on a record but we didn't really finish them as perhaps we should have, although sonically I like it."

It's clear that 'Attention! Attention!' looks to the past glories of 'Amaryllis' and 'The Sound Of Madness' for its sound and melodic nature.

"Well we like to move forward so that no record sounds the same," Myers states. "We even get some people ask us to go back and do stuff like on 'Leave A Whisper' and that wasn't even close to our most successful album. It's got nostalgia value. I think that if you listen to this new album there are songs on there that do have similarities to those on the debut ... 'Monsters' and 'Creatures' are the two. They have a darker guitar vibe. Sonically though, it's more like 'The Sound Of Madness' and certainly on a lyric level it's way better than 'Threat...'."

Myers doesn't totally agree with my summary that 'Threat...' was a little too experimental

"That's a tough line for me," he explains. "I don't really want to say that. We were colouring outside the lines a little for sure, but we knew what we were doing and I think we just wanted to be a little weird. Natural weird is good but making an album just to be weird isn't. 'Threat...' was super organic and natural."

There's no doubt that album was rawer and organic and 'Attention! Attention!' is far more polished, more in line with the band's most successful era.

"I don't think I've heard anything around at the moment that sounds quite like it," Myers adds. "The aggressive tones are there but it's not harsh, it's kind of like the latest Gojira record tone-wise. 'Threat...' was more White Stripes basics."

'Devil' suggests a continuation of 'Threat...'. Not a good thing in my book and perhaps a leftover?

"It's not leftover from the last album," he insists. "We don't write on the road, we write for the album. It may sound similar, maybe because of the background vocals and also because Erik produced the album and also 'Cut The Cord' on 'Threat...'. I don't like 'Threat...' perhaps as much as I did a year ago but I'm still proud of it and it lead us to some of the great songs on this one."

Shinedown's writing process is a familiar one and co-writes are the norm. It's the same with 'Attention! Attention!'

"There's a couple of songs written with Dave Basset, our fifth Beatle," he laughs, "and then a couple that we wrote with Scott Stevens. They're long time collaborators. 'Devil' was Erik and Brent, so it's a mixed bag really. By the way, while we were on tour Erik would have his studio out with him working on a new song every day and at the end of the 'Threat...' tour he had about twenty songs completed, so we could just get right into it. It was Erik that kind of spearheaded it. We were able to steer the writing into a particular direction so it didn't really matter who wrote with who. On the other hand, you can't tailor make a song given the subject matter, it won't work."

The album has been produced totally in house. No return for Rob Cavallo.

"Well Erik showed his hand with 'Cut The Cord'," Myers explains. "It was a huge single for us and he just has a vision for the band. He would rather go crazy making the album than go crazy watching someone else try to make it. Being a band member gives him more passion to make it work. No one else could've made this album. The label trusted us and as a result they're over the moon with it. I mean we've never turned in a turd, they've all done really well. Our attitude has always been to write thirty number one songs, and not just three or four and the rest just fill up the album."

"Well yeah, I mean the internet can be a blessing or a curse," the guitarist surmises. "24/7 access to seventy five percent bullshit isn't great. It's the same with music, when you have to sift through all the sewage to find something good, you know that quality has diminished and people pick that one track that they like and that's contributed to a loss in album sales."

Myers influence has obviously grown within the band.

"Well I now get to design all the stage show for this tour," he confesses proudly. "I mean we've now been a band almost twice as long as the band that made the first two records and of course I toured with the band in the debut era so I've been here a long time. We split everything equally in the band, everything is up for debate. Brent is obviously the leader but if we have ideas and he gets outvoted three to one then he takes it, he's not a dictator. We're all allowed influence and we're all treated the same. Ego takes a back seat."

'Attention! Attention!' has some standout songs and some unusually titled ones, 'Brilliant' and 'Human Radio' being two.

"'Brilliant' is about the eventual turn around in the album story," Myers explains, "it's about the shitty past turning into something good where that person suddenly realises that they can control their own destiny and crawl back into the light; a kind of getting away from drug addiction, alcoholism, depression or whatever. It's not all about Brent, it applies to all four of us. Erik's been through depression, this album reflects that ... 'Get Up' involves him. I was naïve about depression a while ago and I couldn't understand it. When you get the deaths of Chester Bennington and Chris Cornell then you start realising that this is real and uncontrollable and hides in plain sight. 'Human Radio' was the first song that we wrote for the new album and it nearly didn't make it on. It was rewritten so many times and yet I always loved the first demo of it. I love the rhythm and the heavy guitar. I think the Queen similarities stem from the chanting which is perhaps more like My Chemical Romance 'Black Parade' era, plus there's a Pink Floyd 'The Wall' feel to it. The song is about someone who refuses to go along with trends. The video, part of a series of one for each album song, reflects that."

Shinedown has recently been on tour with Iron Maiden. It seemed an odd combination

"Well we got on great with them," the guitarist enthuses. "I did have concerns, because as Henry Rollins once said of support bands, 'You're in front of twenty thousand fans and all you are is something in between them and their favourite band' and that's true, they don't care about you. We turned them around by the end of the tour. Their fans are diehards, some go to every show and they're tough to break and we met one fan who said that we were good and yet he never looked interested when we played because he said that we weren't Iron Maiden. On the last date of the tour Brent asked for fists in the air and he hadn't done it on one night whatsoever, but he ended up doing it. It was a breakthrough moment. We won them over. We grabbed the tour right away, but we realised the magnitude shortly afterwards. We had to rehearse and practice."