When New Zealand's Devilskin last toured the UK (as tour co-headliners with Sumo Cyco), back in the early part of 2017, they were promoting sophomore full-length release 'Be Like The River' and also in preparation for playing Download for the very first time. The ensuing 18 months have been particularly eventful and trying for the band, so Fireworks & Rocktopia sat down with guitarist Nail, bass player Paul Martin and lead-singer Jennie Skulander after a recent show in Chester, to find out what has been happening and how the recent European tour supporting Halestorm went. 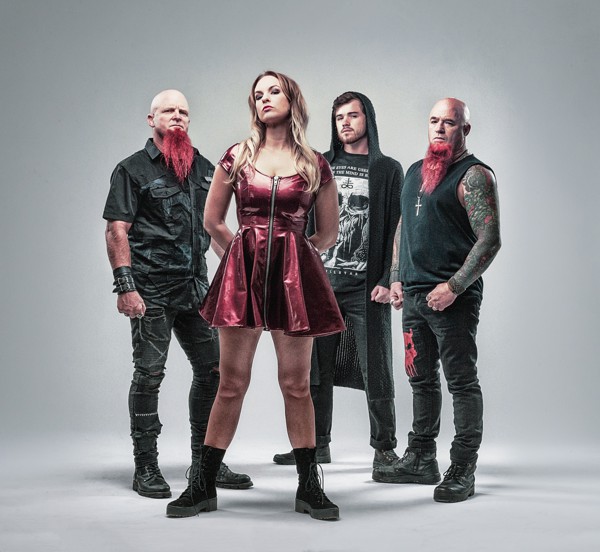 Halestorm did some shows in New Zealand and there was a really good chemistry between the two bands and we all became strong friends. They just rang and asked if we wanted to do the European tour with them. Of course we jumped at the chance. The whole family dynamic that exists in their band is pretty similar to our own. We have met bigger bands, bands who we have supported in New Zealand, who have been complete dicks, but Halestorm are just friendly down to earth people. We've opened for Slash, Alice Cooper and Disturbed, and have nothing but good things to say about them. Motley Crue on the other hand......... We were disappointed we couldn't do the UK leg of the tour, because due to do family and friends living here we spend lots of time coming back and forth anyway. Having said that, the tour in mainland Europe was just so good for us, as we've never visited some of those countries before. It was a fantastic experience. Every gig was sold out, so we kind of had a captive audience and the crowd sizes ranged from 750 to 3,5000. It was a great opportunity to make an impact with people who have never heard of us. We sold t-shirts and CDs so I think we won them over.

It is sometimes easy to forget that New Zealand is not a short plane journey away, so kudos to Devilskin for making such an effort to reach their target audience when some bands can't even find the time to play UK tours and seem to think that one night in London is satisfactory.

From leaving home to arriving at our destination in the UK can be up to 47 hours, so it is quite tiring, but worth it when we get here. We are established in New Zealand and do really well there, but we have to prove ourselves when we come here. The turnout tonight wasn't great but that is all part of the work we have to put in. We started off in the early days playing to nobody and any money we made we put back into the show, to make it the best we possibly could.

The biggest part of 2018 has been spent focusing on the third album and though the release date is only tentatively scheduled for the second half of 2019 thoughts on its creation are high on the agenda.

Since the Sumo Cyco tour back in early 2017 we have been writing a lot of music. We've spent time in the studio and the song 'Endo' has just been released. We are trying to get as much material together so we can make a kick-ass third album. 'Endo' is obviously one of those songs and 'All Fall Down', which we included in the show tonight, is another that we have recorded. We actually demoed almost 30 songs and eventually whittled that down to 2 to record. We have a big bank of songs now that we are really excited about. We even have some older songs that go right back to when the band first started, but we obviously only want to use only the best ones for the record.

New song 'Endo' is about Jennie's personal struggle with stage 4 endometriosis, a condition that causes pain and distress for millions of women on a daily basis all over the world. Putting the lyrics together for the song was a cathartic experience to a degree for her and it is obvious that the subject matter along with the music delivers a powerful message. Paul and Nail leave her to provide the explanation.

It was just something that happened all of a sudden for me last November. I just started vomiting and could not stop. I had a sore back and headaches. I didn't think I had endometriosis, but when I went to see the doctor they found an 11cm cyst (Endometrioma) on one of my ovaries. It was just such a shock. One minute I was sweet and the next I was having surgery and being told I probably can't have any more children. Even 6 months on it is hard to believe it really happened and the thing that sucks is that it could still come back again. It proved easy to write about because it was something I actually experienced. The lyrics came quite quickly and the line 'break the mass up' is about the surgery I had. Everyone should be made aware of this problem that women can face.

The band are keen to push boundaries with their music and it is clear just from this one song that they have developed and grown as writers even from the 'Be Like The River' album. Day to day experiences can generate new ideas and the creation process can often be dictated by life's ups and downs.

The band have evolved and progressed as writers and we are really excited about the songs we have ready for album number 3. We have come a long way since the 'We Rise' debut and now we are never stuck for ideas and they seem to come quite easily. We have a beach retreat that is a 2 or 3 hour drive from where we live, and we like to spend time there working on songs. This one weekend we had been there and had the music for one particular song but no lyrics. Messing around we had tentatively called the song 'Harry The Hovercraft'. Bizarrely we saw a hovercraft on the water, probably only the second time in our lives, and it was quite amusing as we couldn't come up with some decent words for the music we'd written. Anyway, on the drive home there was a really bad car accident. This crazy person, who we had actually met earlier in the day, forced a family off the road. We were the first other car on the scene. 2 children had been ejected from the car when it flipped over, a little girl on one side of the road and little boy on the other. The little boy's name was Victor. We are being subpoenaed to be in court as the crazy guy is being charged with attempted murder. We were so affected by the crash, it was so traumatic. Also, you can imagine the mother's reaction when she sees a bald-headed guy with a red beard sticking his head through the car window and then another who looks the same through the other window. She thought she'd died and gone to hell (lots of laughing).

'Endo' was recorded with producer Greg Haver (Bullet For My Valentine) and mixed by Ben Grosse (Disturbed, Marilyn Manson). The striking video that accompanies the song was directed by Shae Sterling and makes an impact on many levels.

We worked with Clint Murphy on the first two albums and we knew Greg because he and Clint worked together a lot. He's the one and only guest musician we've had on our albums. He was formerly the drummer in Manic Street Preachers and he played percussion on a couple of tracks on the 'Be Like The River' record. He's a Welsh Kiwi and we connected with him really easily. Clint was right for what we were doing when we worked with him, but we just wanted to move on and try something a bit different. The video isn't for the faint hearted. Our drummer Nic (Paul's son) had this idea about a 1950s talent show. We hired this white studio and obviously we end up covered in all this fake blood. We were told that the costs would go up depending on how much mess we made and damage we did. We just asked how much to re-paint the whole place because we were going to destroy it. We spent hours standing in that sticky shit. It was made from corn syrup, food colouring and chocolate sauce. There were no showers in the studio so we had to drive home covered in the stuff as it started to set. Wouldn't you know that a cop pulled us over for speeding. You can imagine his face when he saw us (lots more laughing).

The interview concludes with memories of Download, immediate touring plans and requests for more girly merchandise and then the late hour dictates we bring things to a close. Check out the 'Endo' video on YouTube for good idea of what Devilskin are all about. Talented, hard-working and very nice friendly people with time for everyone.