A lot has been made of this new touring line-up of Thin Lizzy, the appointment of Ricky Warwick as lead singer certainly raising a few eyebrows in some quarters, but in my eyes the return of original drummer Brian Downey and, to a lesser extent, keyboard player Darren Wharton, certainly raises the credibility somewhat in comparison to the John Sykes-fronted metal version of the band. Add in guitarist Vivian Campbell – much underused in his role in Def Leppard – alongside guitarist Scott Gorham and in/out bassist Marco Mendoza, and the mix becomes once again half-irish, which is where the roots of the band should surely lie.

First though there are two support bands, and whilst Supersuckers interest me not a jot, I take my seat in the circle, across the aisle from FM guitarist Jim Kirkpatrick, for yet another viewing of The Union. Luke Morley's post-Thunder band seem to have won over a large portion of a Thunder crowd who were initially skeptical and upset at the break-up of their favourite band. Now with many gigs under their belts The Union look and sound like the real deal, with the affable and remarkably talented Pete Shoulder looking very comfortable in his role despite the latest in a line of dodgy headwear. The set is basically a shortened version of the same one they've been playing for almost a year now, although they've re-jigged it to leave the awesome 'Step Up To The Plate' until a little later, opening instead with the more sedate 'Easy Street'. A new track, 'Siren's Song' is another uptempo swaggering tune with a prominent bass line from Chris Childs, whilst 'Saviour' and 'Black Monday' mellow things out a bit and feature Shoulder's great bluesy voice. It's nice to see Luke Morley enjoying himself on stage again, even addressing the crowd himself, and the band race to complete their paltry half hour with perhaps their best two songs, 'Step Up To The Plate' and 'Watch The River Flow'. The Union are already a great live band and have just been confirmed as support to Whitesnake in a few months, so by the time their second album comes out they should be firmly established.

The new Thin Lizzy line-up and the people behind it are obviously expecting it to be a huge success if the stage set-up is anything to go by. No basic backline and a few lights for these guys, instead you get ramps and walkways, video screens and a huge ever-changing classic logo above Brian Downey's kit as the band launch into 'Are You Ready'. At first it looks a little odd having four guys at the front of the stage in a Lizzy line-up, even more so having Warwick play additional rhythm guitar in his usual low slung way with the punk stance, but his voice is so uncannily like Phil Lynott's that the initial shock soon subsides and the band members professionally move in and out of the spotlight as vocal parts and guitar solos come and go through faithful renditions of the hits 'Waiting For An Alibi' and 'Jailbreak'. It was a neat trick to bring on the kettle drums for the whole band to recreate the intro on the original video to 'Do Anything You Want', with the equally short and snappy 'Don't Believe A Word' following on before the first real surprise of the evening. Marco Mendoza is introduced and plays the killer bass line to 'Dancing In The Moonlight', which gives a whole new atmosphere to the Apollo and has people dancing in the aisles as Gorham's tuneful guitar solo is played perfectly.

It's at this point where you realize just what a difference there is between the present and previous incarnation of this legendary band with much variety creeping into the set with the aggressive 'Massacre' followed by a prominent Darren Wharton providing not only the swirling keyboards on the welcome return of 'Angel Of Death', but also lead vocals on the verse as well. The atmospheric 'Still In Love With You' follows, and whilst Vivian Campbell played beautifully all night, I did feel that the soloing on what's supposed to be a gentle love song was no less over the top that what John Sykes used to do. However, it's dancing in the aisles time again for 'Whiskey In The Jar' and 'Emerald' is probably the best version I've heard since the 'Black Rose' tour.

'Wild One' is a nice surprise with Warwick on fine vocals and acoustic guitar, however I'm not sure if anyone could follow Lynott's rabble-rousing staccato vocal on 'Sha La La', which for old times sake was punctuated by a short but impressive drum solo by Brian Downey, and it was nice to hear a genuinely touching and enthusiastic reaction to that much maligned part of any show. I actually had a lump in my throat each time Phil's face appeared on the video screen during the brilliant 'Cowboy Song', and if they were dancing in the aisles before, then it was complete pandemonium as the set ended with (what else?) 'The Boys Are Back In Town'.

I've often been critical of the crowd at the Apollo, but if you have any doubts that the current line-up will be well-received then you need look no further than the most vociferous request for an encore that I've heard in many a year. The familiar riff to 'Rosalie' sent everyone into raptures before an unexpected 'Bad Reputation' reminded us just what a wealth of great material the Lizzy back catalogue has. Not content with that, a second encore saw the bizarre spectacle of a crowd singing along to celtic guitar harmonies on the lengthy 'Roisin Dubh (Black Rose). I think everyone agreed that the Ricky Warwick fronted Thin Lizzy was better than anyone thought possible, hopefully they'll carry on and cover much more of their rich back catalogue. 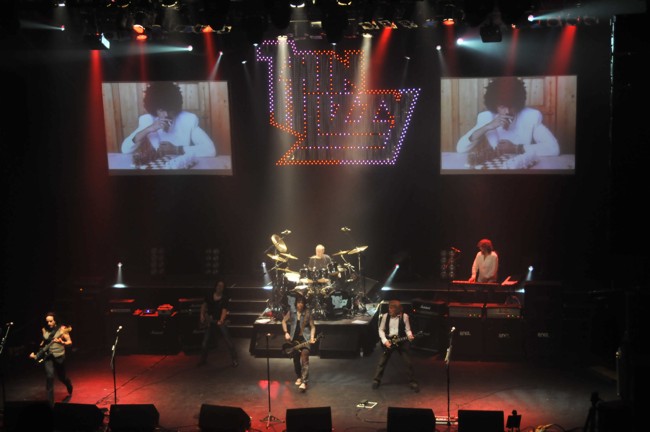