The last time I saw Peter Frampton in Manchester he was playing at the King's Hall in the middle of Belle Vue Zoo Park. It was such a long time ago that my main memories of the day - apart from how powerful the support act Gary Wright was with just three keyboard players and a drummer, and that Frampton encored with the brand new song 'I'm In You' - were the fairground rides and how huge polar bears were. Three and a half decades later I still have a very big soft spot for Peter Frampton (and Gary Wright… and polar bears!) and the thought of him playing an almost three hour set so close to home brought back a lot of happy memories for me.

With no fuss or bother Frampton and his four (mostly) young band members ambled onto the stage and eased into it with the tuneful instrumental 'Off The Hook' before heading into the first of many 'Frampton Comes Alive' classics with the upbeat pop-rocker 'It's A Plain Shame', followed by his bouncy version of Stevie Wonder's 'Signed, Sealed, Delivered…' . I'll be the first to admit that despite having a pleasant voice you could never claim that Frampton is truly a great singer, but his quirky delivery and occasional lapse into spoken parts give him a certain uniqueness. However, as a guitarist he's pretty close to being a national treasure, although his tendency to improvise means that you never get the same solo that you're familiar with, which I actually found mildly annoying on the killer ballad 'Lines On My Face'.

It was a little surprising that his biggest hit 'Show Me The Way' came so early in the set and prompted the kind of singalong that you would usually get at the end, but kudos to the man for not relying on the past and keeping the energy levels up for the excellent 'Restraint' from his latest album. Amid the kind of friendly heckling that's a feature of Frampton shows (asking that he play a bigger venue with seats next time!) he tells the story of finally getting a Grammy for his 2007 instrumental album 'Fingerprints' and plays three songs in a row from that album on which the rest of the band get to shine, particularly keyboard player/guitarist Rob Andrew who proves to be a real find and whose keys on 'I Wanna Go To The Sun' are particularly sublime. It's also a nice touch that original FCA bassist Stanley Sheldon is back in the band and his fretless bass is a highlight throughout, but guitarist Adam Lester and drummer Dan Wojciechowski are great too and Lester takes over the lead solos occasionally as well as he and Rob Arthur being more than competent singers.

The set continues to alternate between new and old through the autobiographical 'Vaudeville Nana And The Banjolele', a brilliant 'All I Wanna Be (Is By Your Side)', the instrumental 'Suite Liberte', Humble Pie's 'Shine On' and 'Asleep At The Wheel' (a new classic if ever there was one). The people who aren't familiar with his later albums were a bit bemused by his version of Soundgarden's 'Black Hole Sun', complete with the main melody played through the trademark talk box, whilst Arthur again starred on Frampton's second best known song 'Baby I Love Your Way'. Everyone got a moment in the limelight on the set ending tour-de-force 'Do You Feel Like I Do', which amazingly given the times he must have played it, still feature quite a bit of improvisation in it's fifteen minute plus length.

Coming back for an encore Frampton gave one of the most heartfelt thank you speeches ("I didn't know if anyone in Manchester would remember me, but we'll try to play somewhere a little more comfortable when I come back in November for the 'Frampton Comes Alive' 35th Anniversary tour!") and the night ends with fiery versions of the recent 'I Want It Back' and his Humble Pie classic 'I Don't Need No Doctor'. As if that wasn't enough the band came back yet again for a version of The Beatles' 'While My Guitar Gently Weeps' with some truly inspired guitar work to cap what was one of the most enjoyable sets I've seen for quite some time. Wherever he plays in November you can bet I'll be there. 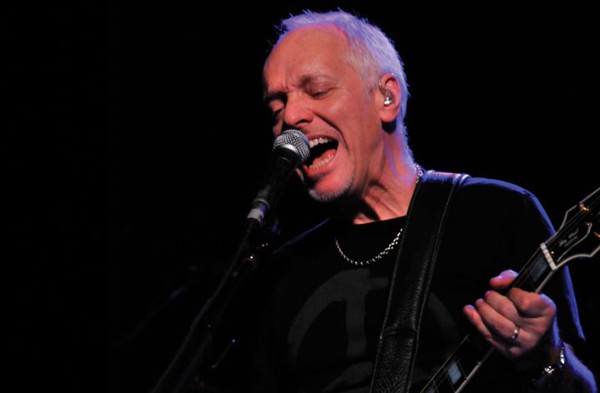