Since the demise of the short-lived ProgPower UK Festival, bands in the Symphonic, Gothic and Progressive Metal genres have been without a dedicated outlet for their music, and it is thanks to Huw Lloyd-Jones, who took the financial risk, and his band of volunteers, that the balance has been redressed. Unfortunately, the attendance figures were on the low side, much less than its sister festival, Summer's End, but I suspect there will be many punters out there cursing that they didn't make it along when they hear what a superb event this was. A friendly atmosphere where bands mixed with fans and a schedule that included a dinner break so you didn't have to miss any performances, made for a perfect recipe. This review is not mine alone but takes into account the discussions that took part with members of the group I was with, which included fellow Fireworks contributors Paul Jerome Smith and Steven Reid. along with two subscribers.

Friday evening featured just two bands but got the weekend off to a terrific start. Female fronted Winter in Eden lived up to the promise shown on their debut album with a very strong performance, with the new songs showcased sounding particularly impressive. The only negative about their set was that the drummer seemed to be having an off night. Headliners for the evening were Vanden Plas, who played a blinder. Professional to the core they were also engaging and looked like they were having a blast. Andy Kuntz had the audience in the palm of his hand as he cajoled much clapping and audience participation. Stefan Lill's guitar riffs were superb but there were two stand-out moments that deserve mention. A technical issue with the drums could have turned into a rather unpleasant pause but Kuntz and Lill started up an impromptu version of 'How Many Tears' with the rest of the band joining in later. As for the version of 'Postcard to God'…phenomenal.

Saturday opened with Birmingham based Hookah the Fuzz, who were extremely interesting musically and for such a young band showed great dexterity and ability; however the vocals were very aggressive (including swearing) and detracted somewhat from a very promising performance. After-Math cemented the idea that there's plenty of talent in the UK for this genre of music. They didn't offer anything new or original but what they did was entertaining and tuneful.

Awake By Design took the award for having the most eccentric front man of the weekend. As well as having the stage persona of a strutting popinjay with ants in its pants, he also spent much of his time running around in the audience. The use of female backing vocals was a nice touch and they proved a very competent band with some strong songs, even if the vocalist's antics were distracting. Toxic Smile from eastern Germany provided a nice change in pace and style as they were more Classic Prog than Metal. Good songs with strong melodies abounded, along with some fine musicianship and a good dose of humour. Their merchandise did brisk business when the set came to a close.

Unfortunately, we then arrived at the weekend's low point with the one band we all agreed were poor, they being To-Mera. They came across like they would rather have been anywhere else and this came across in the music where tunes were at a premium. Indeed, we wondered whether the vocalist was working to a different set list from her colleagues as it generally sounded as if she was singing one song and her band mates playing the tune to another.

The evening session was saved by the excellent Threshold, who were truly magnificent, although didn't quite pip the previous day's headliners for the laurels as best band. They played a set that covered their full canon of albums and as such was perfectly structured in terms of pace and energy. Enjoyment oozed from the stage and the audience were fully engaged and lapping it up. Damian Wilson handled a difficult situation well with an over zealous (possibly drunk) fan pulling at his legs and generally being annoying. Such was the quality of the band's performance that they were called back for an unscheduled encore.

There are those who were unable to stay for the Sunday session but I'm sure there were many who looked at the line-up and decided that, as there were no 'major' names, they wouldn't bother. Well, let me tell them that they missed a treat and arguably the most consistent day for performances. First up were Loreweaver from Italy. Having reviewed their album I knew what to expect and had been telling anyone who would listen that they'd be special, and they didn't let me down. They were sensational with a set full of great songs and terrific musicianship which reminded me of early Dream Theater with a female vocalist (Barbara Rubin) who produced one of the best performances of the weekend. They were that good that the crowd would not be denied an encore.

Haken were impressive although possibly a little bit too clever and meandering for their own good at times. Clearly they are a very accomplished outfit that probably needs a few more memorable tunes to really give them the breakthrough. I wasn't expecting to enjoy the Goth/Death Metal amalgam from Hanging Doll but looks can be deceptive. The growling vocals were low in the mix and used as backing rather than leading. Juxtaposed with female lead vocals this worked really well and they were very tuneful, making them yet another name to watch.

The closing two bands of the weekend both came from The Netherlands and they elicited rather different emotions. I'd not heard of Day Six but two songs in I'd snapped up both their albums from the merchandise table, I was that impressed. Tighter than Biff Byford's spandex trousers they managed to combine huge riffs, incredible time changes and theme switches, all whilst remaining highly melodic. Guitarist/vocalist Robbie van Stiphout was a veritable dervish throughout the set. Again, it was no surprise when an encore was demanded and duly delivered.

Kingfisher Sky closed the event, and even those of us with their albums who expected big things felt they didn't live up to their headlining status. Part of the problem was that they were the only band who brought their own sound engineer and lighting technician (everyone else had used the excellent in-house team who had been spot on all weekend), consequently they played in semi darkness and were way too loud. In fact I had to retreat to the back of the hall because the high notes were actually hurting my ears. The songs seemed rather formulaic and the lack of backing vocals seemed to highlight the sameness of the lead vocals which became rather monotonous. A two hour set was too long.

Up and downs aside this was a brilliant event so let's hope that it covered its costs and there will be a Fused 2012. 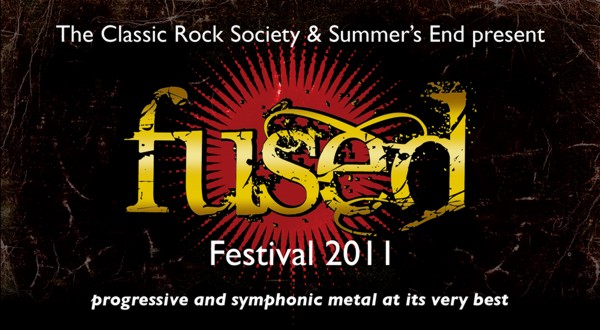