You could be forgiven for not expecting much from a live New York Dolls performance in 2011. Almost three decades apart, a tumultuous history and the deaths of three founding members would, perhaps, suggest the New York Dolls of the 21st-century would offer a barely-competent, shambolic performance carried along solely by the goodwill of the audience and their willingness to see such an influential band in the flesh. A sub-par performance almost wouldn't matter; just seeing the New York Dolls (at least original members David Johansen and Sylvain Sylvain) would be enough. So, a shambolic performance trading on past glories, then? Nothing could be further from the truth.

Eschewing the glam look for which they were renowned back in the 70s (though one or two audience members made a valiant effort), the Dolls came on stage to rapturous applause. David Johansen looked surprisingly sprightly for a man in his 60s who's lived life to the full, and drawled through 'Looking For A Kiss', a classic from their almost-40-year-old debut. Looking not unlike the bastard offspring of Mick Jagger and Joey Ramone (quite apt considering his place in the rock 'n' roll timeline is slap bang between the two), with the well-preserved physique of Iggy, he was truly a sight to behold. As the night went on, he proved to be a fine frontman and an engaging, witty raconteur to boot.

The only other surviving member from the 70s, guitarist Sylvain Sylvain, may be more down-to-earth, but he still commands the stage as only a rock star can. Wearing his trademarked cap, and looking a good 20 years younger than his age, Sylvain brings a certain warmth to the stage, but still tears it up as and when required. If Johansen is the archetypal rock god frontman, then Sylvain is the charismatic everyman.

Joining the Dolls on guitar for the tour was legendary Bowie guitarist Earl Slick, and completing the line-up were drummer Brian Delaney and new recruit (and producer) Jason Hill on bass. Despite not performing together for any great length of time (both Slick and Hill being complete newcomers), the band gelled perfectly, rattling through old favourites and brand new songs with a performance that walked that fine line between loose and tight. That's no criticism – it's that tension and energy that made this set so enthralling.

The tour was in support of the recently-released 'Walking Backwards In High Heels', and seven of the album's twelve tracks get an airing. The newer songs slotted into the set perfectly, showing evidence of evolution yet still capturing the proto-punk sound, spirit and attitude of those first two albums. 'I'm So Fabulous' sounded as visceral and urgent as anything else played tonight, and their 60s girl-group influence shone through on 'Talk To Me Baby' and 'Streetcake'. 'Funky But Chic' was bolstered by three young female backing singers that they'd met in Newcastle when recording the new album. One of the set's highlights, the song adds a touch of, well, funky chic to the set, and live it already sounded like a beloved classic despite being released mere weeks before the gig.

While focusing on newer material, there was no lack of songs from the first incarnation of the Dolls, which still sounded as raw and vital as I imagine they did forty years ago (alas, the original line-up both formed and split up before I was born). Classics such as 'Pills', 'Jet Boy' and (my personal favourite) 'Trash' went down a storm.

Perfectly, the encore begins with a triumphant rendition of 'Personality Crisis' before easing to an end with 'Walking Backwards In High Heels'' more restrained 'End Of The Summer' – from the first track on the first record to the final track on the latest record, the ideal end to a storming set, but not before mistakenly thanking Newcastle, rather than Manchester – truly a Spinal Tap moment, as immediately acknowledged by Johansen.

Playing to a not-quite-full room of 500 seems unjust considering the Dolls' legendary status, the quality of their material (both old and new) and, on the evidence of the night, their incendiary live performance. The not-quite-500 people assembled, however, were eating out of their hands, loving every second, captivated by Johansen's stage presence, Slick's masterful guitar work and Sylvain's charm. So many bands that owe a huge debt to the New York Dolls can fill stadiums, so it's a crying shame that more people aren't interested. Their loss.

It's quite astonishing to think that the band were out of service for three decades – on the strength of tonight, you'd believe they'd been at it non-stop since '71. An incredible performance and a powerful reminder that there's no best-before date on rock 'n' roll. If you have any interest at all in the origins of punk, glam-rock or just love a bit of good old rock 'n' roll, don't miss them next time they're over. 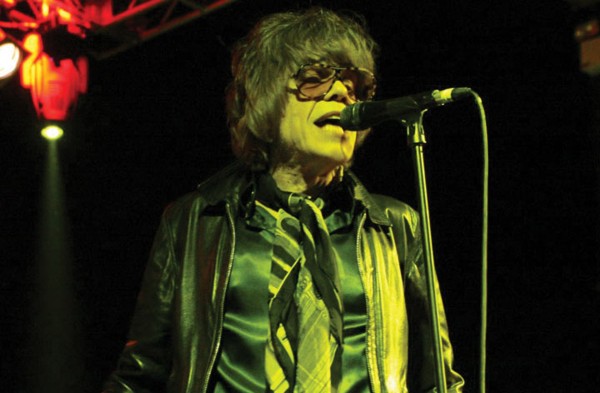