David Coverdale and his latest incarnation of Whitesnake returned to their spiritual home of Hammersmith tonight when the Forevermore tour finally hit London. Opening act on the UK leg of the tour was The Union, the new project/band from Luke Morley and Peter Shoulder, formerly of Thunder and Winterville.

Given that it had rained heavily for two hours before opening, the queue out front was not anywhere near as long as it would usually be for a visit from Whitesnake. Those brave souls and diehards that choose to do so did come up with several ingenious ways to keep out of the rain, including a temporary tent between the railings. But once inside the fans didn’t have to wait long for the opening act to hit the stage. The Union were an excellent choice to open for Snake given the blues based rock style of their songs. When they came to the stage the theatre was less than half full but there was a definite buzz round the place. They played for about 35 minutes and managed to squeeze in six tracks almost all from their debut album. These included ‘Easy Street’ and ‘Step Up To The Plate’ with the lone exception being their new single ‘Sirens Song’. The performance was good if low key and was warmly received by the ever arriving fans. By the time their last song ‘Watch The River Flow’ reached it conclusion the venue had started to seriously pack out. During the following 25 minute break and as the main act approached, it really was standing room only. If this was not a sell out gig then it was very close to it.

The house lights suddenly dropped and The Who’s ‘My Generation’ blasted out over the PA. As the drums and vocals reached their crescendo a single spotlight lit up the Whitesnake symbol. Suddenly David Coverdale appeared out of the darkness swiftly followed by the rest of the band. With the customary screech of “Are You Ready” from the flamboyant front man followed by several trademark thrusts and swings of the microphone stand, the night got underway for real with ‘Best Years’ followed by ‘Give Me All Your Love’. The audience was literally at fever pitch right from the first song.

Coverdale is known for his on stage banter with the crowd and engaged them right from the first gap in proceedings. This was a continued theme every time the band took a break and Coverdale seemed particularly chatty tonight. Whilst his comments are usually warm and genuine, tonight he seemed even more sincere. There was also plenty of humour aimed at himself including Coverdale noting his voice was not what it once was and he would be needing some help at times or “I’ll be grabbing me nuts all night”. Obscenities and flirting aside, Coverdale sometimes resembles a reverend at the pulpit, preaching love and life to his congregation which in this case is known as the Whitesnake Choir. The difference here being the church is a theatre and the church organ has been replaced by a pair of six stings. The set list tonight consisted of a nice balance of old Snake tracks such as ‘Is This Love’ and ‘Love Aint No Stranger’ as well as the last single and a small selection from their latest release. The title track ‘Forevermore’ and ‘Fare Thee Well’ received particularly poignant intros when Cov dedicated them to the fans that had followed the band for over 30 years. There was of course the regulatory guitar dual and an astonishing drum solo from Brian Tichy. The main segment of the show was bought to a rousing crashing conclusion with ‘Fool For Your Loving’ and ‘Here I Go Again’ back to back.

As if that wasn’t enough to finish most fans off, during the interlude between them, Coverdale introduced a certain Bernie Marsden to the audience. It was a simply mind-blowing treat for all Whitesnake fans present not only to see Coverdale and Marsden together again on stage, but also to have him play with the band on ‘Here I Go Again’, the song they wrote together many years previous. There was the customary “errrs a song for ya” from Coverdale before the opening keys kicked in and then the place simply went crazy. The sight and sound of the three lead guitars, Cov with his arm round Marsden after all this time, was something no Whitesnake fan present tonight will forget. After a short encore interlude, Marsden returned with the band to play ‘Still Of The Night’. To close the show, Coverdale was left on his own to sing the haunting Deep Purple track ‘Soldier Of Fortune’ which he had written all those years ago. As is always the case ‘We Wish You Well’ struck up over the PA as the remaining members returned to the stage with Marsden in tow to take the final bow with the main man.

This was a fantastic night from the Master and his latest cohorts. Musically the band was on top form and Coverdale seems to have struck gold with this current guitar line up - Reb Beech and Doug Aldrich are well on their way to becoming the best pair of guitarists Cov has ever had backing him. Neither of them may match the technical abilities of Via or maybe even Vandenburg, but together they give the band an excellent array of sound and options. This can clearly be heard on the new album with a song styled in almost every era from Snake history. On the live stage they play well off each other and seem to be having immense fun doing it which only adds to the enjoyment of watching them both. The two six stringers were excellently backed up by a rhythm and keys section made up of mostly newcomers to the outfit since the last tour. But as always, it was the ever present David Coverdale who stole the show. Despite being in the business for almost 40 years, and turning 60 later this year, he looked to be having as much fun tonight as he ever has. Very few front men in rock history have engaged the audience in quite the manner of Coverdale.

Each break in the music presented a wonderful opportunity for warm words, some wise reflection and some good humour. Whilst the banter may be somewhat politically incorrect at times, he manages to get away with it with a cheeky look and a smile. It really does bring an air of intimacy with the audience that not many bands can match. Musically there can be no denying that Coverdale has lost some of the range in his voice, but whilst some depth may have gone he is still able to give each song his all and hit those high notes. If there is any negative to be found from tonight as a whole it would be that the guitar dual and drum solo went on simply too long. It’s likely this would be felt even more so by the younger generations present given many newer bands don’t include such moments anymore. No-one there would deny they were amazing to watch but had each been trimmed a little there would have been time for another song, maybe an old classic like ‘Lovehunter’. But that is a small distraction from what was overall a wonderful night of great moments and fine music. With a well received new album and now a successful tour to promote it, Coverdale and Whitesnake it seems are truly back with a vengeance. This reviewer has seen virtually every Snake tour since 1994 and can happily state this was definitely the best of the lot. That would be the case even without Marsden making an appearance that simply added a special moment to an already superb night. 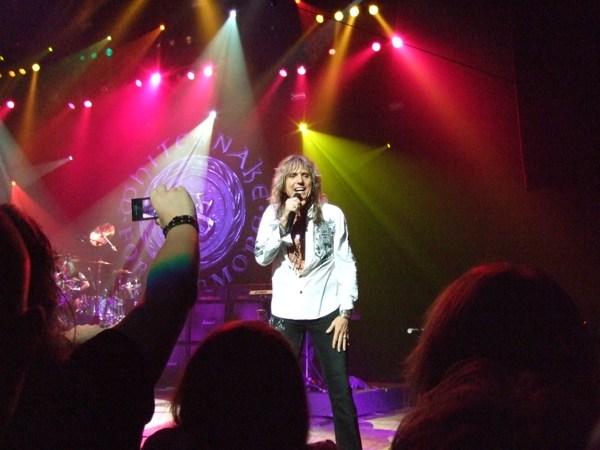