So following on from a great gig on the Tuesday night in Toronto featuring Def Leppard & Heart, Andy and myself made the 3 hour journey up north to Orillia and the purpose built gaming and entertainment venue of Casino Rama, to experience the third annual Radio for Radiology Benefit Concert which featured these Canadian icons.

On the softer side of Melodic Rock lies Glass Tiger, and Alan Frew’s buttery smooth brogue is still as clear and his voice still as pure as it was in 1986.  Glass Tiger circa 2011 features the same line-up as twenty-five years earlier, which is no small accomplishment. Musically, Glass Tiger never skipped a beat and kicked off with the title track from their excellent ‘Thin Red Line’ opus. ‘I Will Be There’ and ‘You’re What I Look For’ from the same album swiftly followed and I was blown away just how good a vocalist and frontman Alan Frew really is, with the rest of the band very tight and still genuinely enjoying themselves. The band delivered hit after hit including ‘You’re What I Look For’, whilst Frew amused the crowd before ‘My Town’ as he announced that this 1991 duet was “the song that made Rod Stewart famous”! ‘Diamond Sun’ and ‘Someday’ are just as infectious live as on record and guitarist Al Connelly nailed the mighty opening riff of ‘Animal Heart’, which is a personal favourite of mine from the ‘Simple Mission’ album and brought the main part of this excellent set to a close. The band returned to deliver their most well known and smash hit single from 1986, ‘Don’t Forget Me When I’m Gone’, and the crowd quite literally went berserk, jumping, dancing, singing and blowing off what last bit of steam remained after doing much the same for the previous hour.

Before too long, April Wine emerged on stage with the guitar driven hard rock sound they became known for with ‘Crash and Burn’ and ‘Big City Girls’ – from 1981's 'Nature of the Beast', the band’s commercial peak. Although Myles Goodwyn and Brian Greenway are joined on stage these days by two newcomers in bassist Breen LeBoeuf and drummer Blair MacKay, their tight performance and onstage chemistry made it seem as if all four members had been playing together for years. Goodwyn, the group’s frontman and main writer, has been singing some of the same songs for over 40 years but was able to keep it fresh by maintaining a powerful stage presence and giving it his best on each note.

April Wine songs have a certain youthful element to them, in part created by Goodwyn’s unique voice, and it was remarkable to hear him reach that very same tone. The crowd also gave off a great energy as everyone took to their feet and sang along to classics like 'Just Between You and Me', 'Sign Of The Gypsy Queen' and 'I Like to Rock'. Blistering guitars throughout April Wine's performance kept the band's signature raw sound intact; in fact the overall mix of sound was nearly perfect with very audible vocals from Myles and yet a huge instrumental force throughout. Without a doubt some of rock's greatest groups have hailed from Canada, and April Wine is no exception. The band lived up to their reputation as a great live act with impeccable musicianship and showmanship, and two massive Canadian rock music fans from Oldham went home very happy. 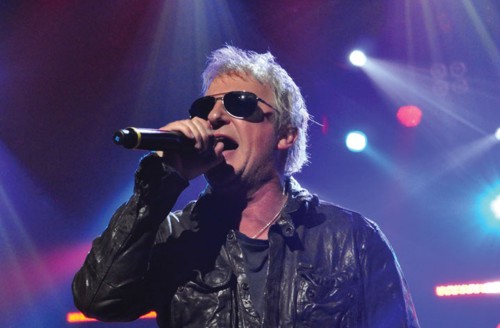