THE SINGLE
On March 12th we’ll be releasing an exclusive signed double a-sided CD single to coincide with our upcoming UK tour (more about that later). The tracks are;

We actually re-recorded ‘Make Up Your Mind’ specifically for single purposes and what we got was a really uplifting, vibrant version of the song.
‘Obsession’ went down so well on our last tour we actually couldn’t decide which track was a better choice so we ended up with the double a-side option.
The two live tracks were recorded at Islington Academy on the last tour and we loved the rawness of the performances so we thought they’d complement the two studio tracks well.

‘Make Up Your Mind/Obsession’ is now available for pre-order right now here so if you’re up for getting some decent music into the charts (and who isn’t?) you know what to do! There’s also a single/tour shirt bundle available for those amongst you that are coming to a show and want to look the part.

THE TOUR
Yes folks, on March 2nd we begin a co-headlining UK and Ireland tour with The Answer.
Tickets are selling really well and we expect most shows to sell out before the tour begins so if you want to be sure of your place don’t think about it too long! It’s also our first trip across the Irish Sea so we’re looking forward to a few pints of the black stuff and meeting some new friends there. 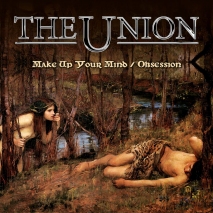 Yes folks, on March 2nd we begin a co-headlining UK and Ireland tour with The Answer.
Tweet