Jeff Wagner is the author of the critically acclaimed history of progressive metal, Mean Deviation. He is also a former editor of Metal Maniacs magazine and veteran employee with record labels such as Relapse, The End, and Century Media. Visit the Bazillion Points website for info on how to buy the book: www.bazillionpoints.com

What inspired you to write Mean Deviation?

For almost as long as I've been following metal (early '80s), I've often gravitated toward the weirder, more experimental, more progressive bands in the genre. Also because there hadn't yet been a book written on progressive metal, so I figured it was time. Luckily Bazillion Points felt the same way, and I signed the contract and began rolling up my sleeves on the book in early 2008.

Can you take me through the research process?

Yeah: live it for the better part of your life. Seriously, I was hard-wired to write the book just through following metal for years and years, and having a particular interest in the weirder, more progressive bands. Like many metal fans, I'm a bit obsessive, although I'd like to think I'm healthily obsessive. When writing the book, I did of course have to bust out my fanzine/magazine collection, various books, and other sources to fact-check and make sure I had it all correct, but the basics of the book and even some of the minutiae was just stuff I'd stored away in my head already. I can hardly change a car tire, but I can recite the Fates Warning discography, including song titles, by memory. It's my curse.

How long did it take you to compile the book?

Who are your favourite prog rock bands of all time?

Got a few hours? There are many, including a bunch of obscure ones like Gnidrolog, and a huge helping of Italian stuff. But I'll limit it to ten: Rush, Porcupine Tree, The Mars Volta, King Crimson, Genesis, Van Der Graaf Generator, Camel, Gentle Giant, Banco Del Mutuo Soccorso, Pink Floyd. I left off metal bands and kept it on the rock side of the tracks, since you said "prog rock."

I'm actually pretty excited about the new album. The two new tracks they previewed from it two years ago are quite good, and although the rate of change/evolution the band's music goes through is less radical than it used to be, there's usually always something interesting happening. And they still sound inspired by each other, in terms of their chemistry, which is pretty amazing for a band that's been around that long. So, yeah, bring on album #19. Unless you're counting all the live albums and DVDs, in which case it's "yeah, bring on release #379."

There have been a lot of Rush releases lately; what are your thoughts on the numerous DVDs and CDs?

It's overkill. I count four live albums, three DVDs, three compilations and three box sets since their last studio album (Snakes & Ladders, 2007). I liked their old pattern of doing one live album every four studio albums. It served to mark eras. I realise that the time between Rush studio albums is much longer these days, but really, all that? Seems ludicrous, but if you don't like it, don't buy it. So I don't. And this is one of my favourite bands. I used to buy the DVDs (R30, Rush in Rio), but I don't need all these new ones. I'm more into studio albums. I own very few live albums by any band, actually. I love going to live shows, but don't much like listening to shows after the fact. That's just me.

What did you think of the famed Rush documentary Beyond The Lighted Stage?

Quite good. I like that it was made by a capable Canadian who is also a fan. I liked all the different facets you saw of the guys, I think their sharp sense of humour comes across well, which I think is something people forget about Rush, that they're not always 100% furrow-browed seriousness.

There have been a few books written on the band; what are your thoughts on those and do you think a definitive book is yet to be penned?

Probably not yet. But I think a great book, up until the Hold Your Fire era anyway (1988) was Visions, by Bill Banasiewicz. I wish he would expand it to include all that has come since, but it still covers the most interesting half of Rush's forty year history. It's long out of print I'm sure, but well worth getting. I still bust it out and look at it and read some of it now and again. It's worth it for the photos alone. Banasiewicz isn't a mindblowing writer, but his enthusiasm and passion trumps that, and I'll take enthusiasm and passion over grammar school perfection any day. Martin Popoff's Contents Under Pressure is also really good.

Can you name your favourite Rush concerts?

No, I seriously can't. One that I was not at that I revisit more than any other is the one from the Forum, Montreal, Quebec, March 27, 1981. It was released on video, played on MTV back in the day, and has gotten a lot of mileage. That's Rush at a certain peak, no doubt. Magic stuff.

What are your favourite Rush albums?

The string of seven albums that starts with Caress Of Steel and ends with Signals is one of the most amazing runs of any band in rock history (1975 to 1983). Each one is terrific. The others in that string: 2112, A Farewell To Kings, Hemispheres, Permanent Waves and Moving Pictures. Couldn't imagine life without any of these.

Roll The Bones holds the highest amount of clunkers, songs that just aren't very memorable. And I've never warmed up to Power Windows. There are only two songs on there I look forward to listening to ('Mystic Rhythms' and 'Marathon'). Although 'Middletown Dreams' has been sneaking up on me lately, so maybe by the time I'm ninety I'll like half the album. And really, the first album, Rush, is not one I listen to often. It has its moments, and it's special because it's the first, but they would get so much better, and quickly. And here's a reason to never get locked into your tastes: two years ago I would have said Hold Your Fire was the worst piece of crap Rush ever released, but that album hit me like a ton of bricks last year. It was a huge revelation, and now ranks as one of my favourite Rush albums. I didn't give it the chance it deserved when it was released, but of that whole synth-heavy pop-leaning era, I'd now say it's the masterpiece. No question. And that's a reason never to be slavish to your tastes. I wasn't ready for it in 1987. But come 2011, and with a taste for pop and slickness that I didn't have in 1987, it sounded totally fresh to me. I was finally ready for it.

Are there any bands that have been (wrongly) dubbed prog by critics but which you think are not prog but, say, melodic rock?

I think Marillion have recorded more albums that are more melodic rock than prog. Some Spock's Beard albums, too. Rush themselves, once you start getting into the mid '80s and beyond, are basically a melodic rock band. A very sophisticated one, but that's kind of how I've always heard albums like Hold Your Fire or Presto. Even Porcupine Tree have recorded individual songs that are great melodic rock, but not necessarily prog (most of these would be on the Stupid Dream and Lightbulb Sun albums). As far as entire bands go, I can't think of any off the top of my head. I'd be curious to hear your answer to that...

What are your favourite books on rock and metal in general?

My favourite might be This Band Could Be Your Life (Michael Azerrad). Despite my differences with the "if it ain't indie, it ain't shit" attitude of the author (he at least plays an excellent devil's advocate from this angle throughout the book), and having only a passing interest in a minority of the bands he's writing about, it's a brilliant piece of rock writing. Other favourites: Jaco -- The Extraordinary And Tragic Life Of Jaco Pastorius (Bill Milkowski); Swedish Death Metal (Daniel Ekeroth); The Music's All That Matters -- A History Of Progressive Rock (Paul Stump); Kiss Alive Forever (Curt Gooch & Jeff Suhs). There are quite a few more, but these come readily to mind.

Are there any rock/metal writers that you enjoy reading and hold in high regard?

My three favourites are guys that haven't yet written a single music book between them, but I'd love if they did: Mikko Mattila (of Isten 'zine); Chris Maycock; S. Craig Zahler. The latter two are guys who did their own fanzines in the mid/late '90s. I later recruited them for Metal Maniacs when I was an editor there, and getting to know them and reading their writing made me a better writer in turn. They and Mikko are brilliant.

What's your music collection like (LPs/CDs/books etc)? How/where do you store it all?

I store it all in two rooms: my home office (vinyl) and my dedicated music room (CDs). My rock/metal books I have on my bookshelves along with all my other books. I love physical music. I like having the artwork, the package, all the extras the band wants us to see when they present their album. I always will. Downloaders are missing out. And screw earbuds. How can people listen to their music as lesser-sounding mp3s through fucking earbuds? To each their own, of course, that's the whole of the law, but for me there's hardly any greater pleasure in life than listening to a favourite album in the dark on a big stereo. As for my collection itself, it's probably something that would be considered ridiculous to most people, in terms of how much stuff it is and how much space it takes up. But for me the stuff is like a necessary second skin. And as much as I have, it's not near what I could have. If I'd kept everything that's ever been in my possession or crossed my path at some point, it would be over 10,000 pieces, easily. I tend to weed out more the older I get, keeping only what feels necessary. And that numbers about 1800 pieces right now (CD and vinyl). I guess. I don't count. And many of those are repeats, as I have most of my favourite albums on CD and vinyl. I like both formats equally and find it hard not to have something like Rush's Moving Pictures, Radiohead's OK Computer or Metallica's Ride The Lightning on both CD and vinyl.

Are you working on any more books?

Only in my head. Nothing official yet. And it might be a while. A book takes a long time, at least the way I wrote Mean Deviation took a long time. I have a day job so I could only write on the weekends. I'm not fresh for writing at the end of a long day of work during the week. But I'd love to and I think I've got several more cool books in me. They'll get out eventually. I'm just not Martin Popoff or Neil Daniels in terms of how prolific I am. 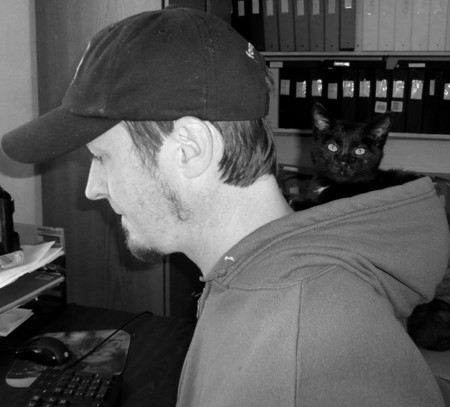