After spending a very eventful and busy year 2012 promoting their latest album release, “Bilateral”, acclaimed Norwegian Progsters LEPROUS have now started their recording sessions for the upcoming, still untitled next studio album, to be released before the Summer 2013 worldwide via InsideOut Music.
LEPROUS singer / synth-player Einar Solberg checked with a status report as follows:
"As many of you already know, we’ve started recording our new album. The drums are finished, and we’re now focusing on the guitars. Also this time we’re using Vegard “Ihsahn” Tveitan and Heidi “StarOfAsh” S. Tveitan as our producers / technicians. The drums were recorded in the really cool and old school Juke Joint Studio (http://www.jukejointstudio.com/ ), and we’re really satisfied with the result.
As far as the new music, we can only remind you that LEPROUS will never be the kind of band to re-create the mood from previous works, and it’s very important for us that each album has its own strong character.
We have great belief in this album and we promise something fresh, challenging and soulful! This album will also be mixed and mastered by Mr. Jens Bogren @ Fascination Street Studios.”
Check out a special studio-video from the drum recording sessions here: http://www.youtube.com/watch?v=uDnmicSrkYI
After a successful run headlining the “European Progressive Assault” tour our all over Europe this past October, LEPROUS are not only already working on next touring plans for 2013, but have also started confirming some prominent Summer festival slots (Wacken, Hellfest, Tuska, etc.) as well as special international shows in countries like Serbia (making up for a cancelled show-date on the past tour!) as well as Israel in January.
See all upcoming dates…
LEPROUS – Live 2013:
11.01.2013 Tel Aviv (Israel) - Reading 3 / ProgStage Winter Mini-Fest + Pagan’s Mind & ROTA
http://reading3.co.il
15.01.2013 Beograd (Serbia) - Gun Club
http://www.facebook.com/#!/pages/Gun-Club/145886862102999?fref=ts
16.03.2013 Porsgrunn (Norway) - Folkets Hus / Break The Ice ’13
21.04.2013 Tilburg (The Netherlands) - 013 / Roadburn Festival - Afterburner
http://www.roadburn.com
08.06.2013 Sölvesborg (Sweden) - Sweden Rock Festival
http://www.swedenrock.com
21.06.2013 Clisson (France) - Hellfest
http://www.hellfest.fr
28.06.2013 Helsinki (Finland) - Tuska Open Air
http://www.tuska-festival.fi
21.-28.07.2013 Tolmin (Slovenia) - Metal Days Festival
http://www.metaldays.net
01.-03.08.2013 Wacken (Germany) - Wacken Open Air
http://www.wacken.com
07.-10.08.2013 Josefov (Czech Republic) - Brutal Assault Festival
http://www.brutalassault.cz
More dates will be announced soon…
LEPROUS’ latest album, "Bilateral", was skillfully mixed and mastered by
Jens Bogren at Fascination Street studio (Opeth, Devin Townsend, Symphony X, etc.).
The album features cover artwork by the Surrealist Jeff Jordan (www.jeffjordanart.com),
who has also worked for The Mars Volta and many more.
The promotional video clip for the song “Restless” off “Bilateral”
album can be seen here: http://www.youtube.com/watch?v=986iAyQpr1U
LEPROUS Line-Up:
Einar Solberg - synth/vocals
Tor Oddmund Suhrke - guitar
Øystein Landsverk - guitar
Rein Blomquist - bass
Tobias Ørnes Andersen - drums
LEPROUS online:
www.leprous.net
www.leprous.net/mobile
www.facebook.com/leprousband
www.myspace.com/leprousband
www.youtube.com/leprouschannel 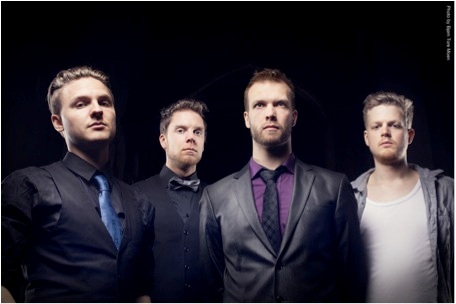