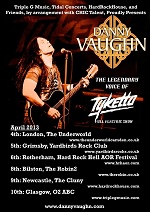 Danny Vaughn has announced full details of his 2013 solo tour, and this time it’s electric.. Full details of the dates are as follows:
April 4th – London Camden Underworld
April 5th – Grimsby Yardbirds Rock Club
April 6th – Rotherham Hard Rock Hell AOR Festival
April 8th – Bilston Robin 2
April 9th – Newcastle Cluny
April 10th – Glasgow O2 ABC
Danny Vaughn first burst onto the Rock Scene as the new lead singer for WAYSTED, the band formed by Pete Way on his departure from UFO. Recording the album, Save Your Prayers, which included a reworking of the single, Heaven Tonight, was Danny Vaughn’s debut recordings. And if that wasn’t daunting enough, his first gig with WAYSTED was in front of around 15,000 people at a festival in Israel.
After his departure from WAYSTED, Danny Vaughn formed TYKETTO, releasing the acclaimed debut album, Don’t Come Easy, on Geffen. The first single, Forever Young, is the anthem for all rock fans!
After a four year hiatus, Danny Vaughn returned to music with the excellent Soldiers and Sailors on Riverside; the first release for his solo band, VAUGHN. Quickly followed by Fearless, Traveller, and the excellent, The Road Less Travelled, Danny Vaughn had returned triumphant to the music industry.
Danny Vaughn is a man in demand! He has written and recorded and sung with many melodic rock artists over several years, from Yes, Riot, Jorge Salan, and including the projects, From The Inside, Flesh & Blood, and The Once and Future King concept album for Ten singer, Gary Hughes. In addition to this, Danny Vaughn is also the lead vocalist for The ULTIMATE EAGLES. This is a collection of professional musicians who all share a love of Eagles music, coming together when their schedules allow, touring Europe performing Eagles hits to ever-growing audiences. The ULTIMATE EAGLES are considered to be THE number one tribute to the music of The Eagles, and if proof was needed, check out the YouTube video for Desperado, reaching over 1,000,000 hits in three months, before The Eagles themselves asked for evidence that they were not miming to the original track........
Danny Vaughn has also found time in 2011 to reform the full original line-up of TYKETTO, writing and recording a brand new album, Dig In Deep. Considered by many to be on a par with the 1991 debut, TYKETTO are still touring across the UK and Europe, performing to ever-growing audiences.
Danny Vaughn has one of the most distinctive, strongest, and best voices of his generation. On hearing his extraordinary voice, you can understand why Classic Rock Magazine listed Danny Vaughn as one of the top singers of all time, describing him as having Titanic Tonsils!!!!!!!
Also available from www.hardrockhouse.com are a selection of Danny’s solo albums, including Reprise, The Road Less Travelled & Standing Alone with some great bundled offers on over Christmas
Wishing everyone a very happy Christmas and a wonderful 2013 and see you all at the gigs 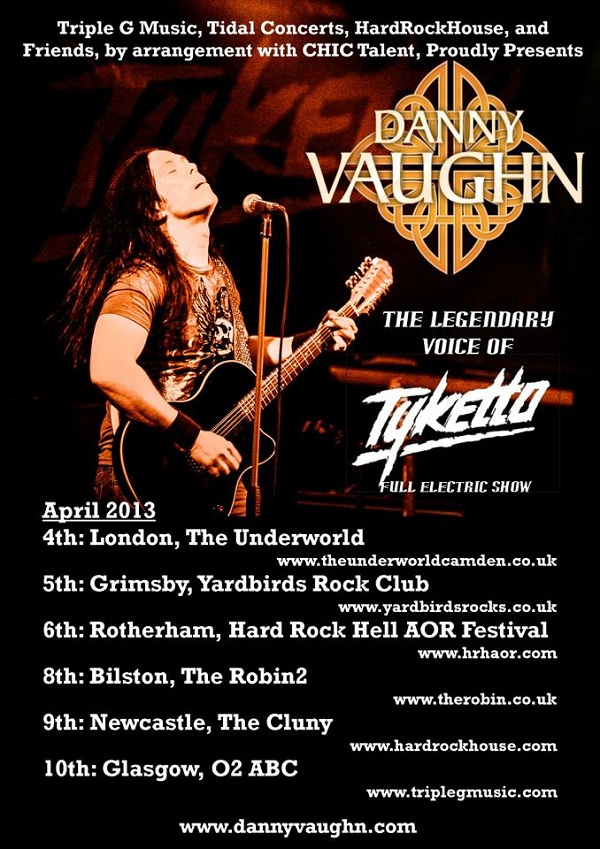