The hosts of the festivities known as "Bonzo Bash; A Tribute to John Henry Bonham" (Zep's drummer in case you just fell to earth) were Brian Tichy the mastermind of the bash and drummer/guitarist with Ozzy, Whitesnake, S.U.N., and The Moby Dicks, Michael Portnoy the original drummer in Dream Theater and now The Winery Dogs, and the legendary and iconic elder statesman of rock, and double bass drum king, Carmine Appice, (Vanilla Fudge/Beck,Bogert,Appice/Ozzy/King Kobra) as well as Joe Sutton. Each drummer chooses a Zeppelin song he/she loves, and performs it with the help of the backing band "The Moby Dicks".

These Zeppelin tunes are played by 25 of the biggest drummers rock has to offer, on any level, with the backing of the band known as "The Moby Dicks", who are Michael Devin on bass from Whitesnake, Chas West on vox from Bonham, Brian Tichy of Whitesnake/Ozzy/S.U.N. on guitars and drums, Brent Woods on guitars from Vince Neil, Stephen DeLuca on keys, and a shitload of guest musicians such as Oni Logan of Lynch Mob and Dio's Disciples, and Robert Mason of Lynch Mob and Warrant, adding to the vocal line up. James Lomenzo of White Lion, Megadeath and Zack Wylde's Black Label Society, jumped in on bass, and Traci Guns of L.A. Guns on guitar.

Zep songs from almost every album were played and some of the drummers and songs they chose were Corky Laing of Mountain, the drummer on the infamous "Mississippi Queen", who played "Communication Breakdown", Simon Wright of AC/DC and Dio, played "Custard Pie", Rikki Rockett of Poison played "Dancin' Days" with Robert De Leo of The Stone Temple Pilots on guitar, Mike Portnoy formerly of Dream Theater, the ass kicking drummer played Bonzo's Montreaux/Night Flight and took it soaring. AJ Pero of Twisted Sister and Adrenaline Mob played "Nobody's Fault But Mine", w/ Mike Orlando on guitar & John Moyer on bass – the three that make up The Adrenaline Mob), and they were tight, AJ is one of rocks premiere drummers, one bad ass guy and player... 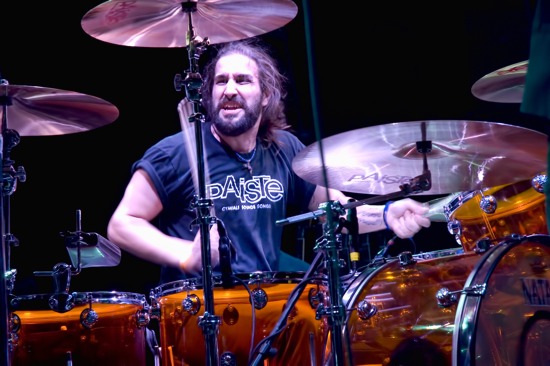 Brian Tichy an amazing drummer, and guitar player, who created Bonzo Bash, played "Celebration Day", "Kashmir" (with Traci Guns on guitar), and "Achilles Last Stand" (with Robert DeLeo of STP on bass), and that's just on the drums. He finished the show out on guitar with Courtney DeAugustine on drums and vocals for "Stairway To Heaven. Courtney nailed the vocals on a notoriously difficult song to sing well, and drums, which she pounded the shit out of, of course while singing, and to add to the authenticity of the vibe, Brian played the classic Gibson SG double neck guitar originally made famous by Jimmy Page. Brian did Stairway justice on guitar, giving it the exact vibe it needed to rock and roll. The house was rockin' it's asses off, the crowd went crazy. This was a perfect way to end the show. Life is fucking good.

As if were not enough to have 25 drummers chose a Zep song and play it with the "backing" band called "The Moby Dicks", a "Bonzo Bash Legend Award" was presented to Bill Ward, Black Sabbath's original and long time drummer, who is not only a Godfather of metal drumming, but a genuinely nice guy; Bill is so deserving. Bill Ward's playing with Black Sabbath paved a road for all of us that we still travel down today. The Award was presented to him by the iconic and also legendary, Carmine Appice, a "Bonzo Bash Legends Award" winner himself, and the guy who seems to do it all from drums, to guitars, to hosting, to putting the show together in the first place, Mr. Brian Tichy.

It was a bit emotional for everyone because Sabbath has been a part of our lives for so long, so we feel like we know Bill. The crowd loved him, and were yelling "hello", and "Sabbath", and "we love you" in Bill's direction on stage where he received the Award. He seemed humbled by the award and attention of which he deserves both. He sat down on the drum riser with microphone in hand and talked to the crowd about Sabbath music, being in the business, and of course about his friendship with John Henry Bonham, and how when they were 16 years old Bonham had Bill stand 10 feet in front of his bass drum as he slammed the kik drum. Apparently even at that age, Bonham had a powerful hit that moved some serious air, so much so that it left a long lasting impression on Bill.

I love Bill with all my heart and soul, Black Sabbath was and still is my favorite band, since I was 13 years old growing up in NY in the 70's seeing the band at Madison Sq. Garden. He seemed genuinely happy and touched deeply by the crowd's affection towards him. 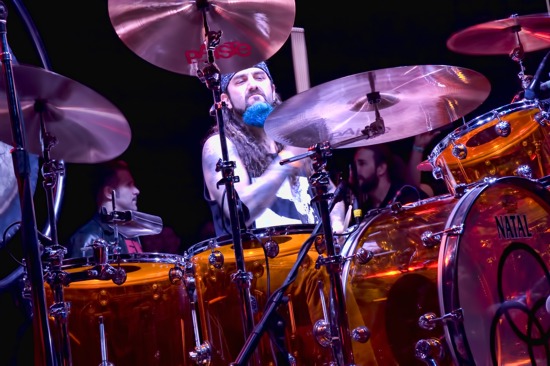 The show had an original starting time of 8 PM, but because so many musicians were stuck in Los Angeles traffic, the show was pushed up a bit. Nobody seemed to mind, the crowd at the show just had this amazing vibe, a camaraderie of having something heavy, emotional, and spiritual in common. Bonzo's orange acrylic Drums pounding, Marshall Amps cranked to "11", Metal, Rock, crazy grooves and riffs, screaming vocals, witchcraft, sorcery, fantasy, drinking, smoking, Led Zeppelin, and John Henry Bonham.

It was like hanging out at your friend's house when you were a kid, and their parents were gone for the weekend. And all these cool famous musicians come over to hang out and party and play cool Zeppelin tunes all night long. The show went on for FIVE and ONE HALF HOURS, and it was heaven on earth, with a stairway to heaven on the horizon, and a misty mountain hop, cause you know life sometimes has two meanings... ! Life is fucking good.

Another great Bonzo Bash in the books; and I'm already looking forward to next year. 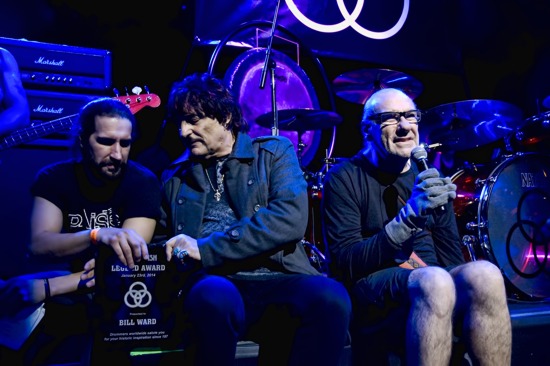 J
JeProks Top 10 Reviewer 2 reviews
Report this review Comments (0) | Was this review helpful? 0 0
We use cookies