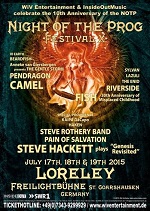 The Night of the Prog Festival, presented by WiV Entertainment & InsideOutMusic, is this year celebrating its 10th anniversary by extending the event to three days and inviting some of the best of the previous line-ups as well as some brand new faces.

‘Back in 2006 we started this festival by accident when the owner of the Lorelei Amphitheatre asked me if I want to set up a show there. At that time I had Fish with the 20th Anniversary Misplaced Childhood show on tour, and I also remember when Marillion played at the venue in 1987 - sold out with 15,000 people.

This led me to the decision to start a small 1 day Festival with Fish as the Headliner accompanied by Mostly Autumn, Sylvan and a German Genesis Tribute act called Seconds Out.  The success was pretty astonishing with around 1300 people attending. It was pretty clear that we could continue with the festival and make it 2 days. With acts like Jethro Tull, Roger Hodgson, IQ, Pain of Salvation, Asia, Tangerine Dream and Marillion to name a few, we got some of the biggest names in the genre and the festival grew from there.

Since then we have had acts like Dream Theater, Opeth, Steven Wilson, Saga and Transatlantic perform, and now are quite close to having a "whose who" of the Prog / Metal Scene.

But the success is not only because we have good line ups there, it is also because the venue and the surrounding area is outstanding. The beautiful UNESCO WORLD HERITAGE Lorelei Valley leaves the visitors of the festival with a special feeling that combines fantastic music with an extraordinary landscape.

We hope that we can continue with the Festival for many years to come, branching out into other subgenres and getting the last missing icons of Prog there as well’.

Running from the 17th till the 19th July 2015, the Friday opening day will be headlined by the legendary Camel and they will be joined by Pendragon, Anneke van Giersbergen presents The Gentle Storm, Beardfish & IO Earth.

Saturday 18th July will see Fish return to the stage with his 30th Anniversary celebration of Misplaced Childhood, and bolstering the line-up will be Riverside, The Enid, Lazuli and Sylvan.

Taking place at the beautiful Lorelei Amphitheatre in Germany, tickets are on sale now from www.wiventertainment.com 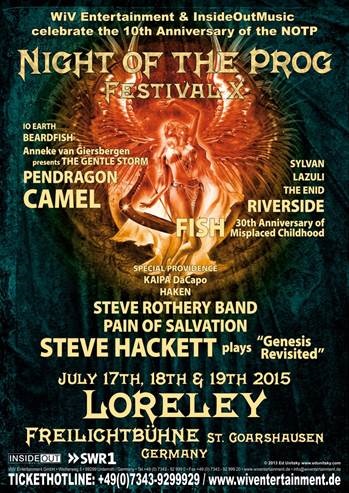