We're in Anaheim, California once again at the Anaheim Convention Center for NAMM 2015, in Southern California, right next to Disneyland, about 50 miles south of Los Angeles, and it is its usual paradise, sunny, clear, and with over one million square feet spread throughout four floors of exhibits of everything, anything and anyone music. It's so big and spread out it's very tricky to get to see all you want, and you have to navigate crowds upwards of 110,000 people from all over the world as you walk the Convention Centers floors. What a cool thing to be with so many people who love music as much as you do. It really is a party festival vibe with a lot of business intertwined for good measure. If you're not having a good time here, you won't have a good time anywhere.

Every year for the last over 110 years companies that make musical instruments, such as DW, Tama, Ludwig, Pearl, Zildjian, Paiste, Gibson, ESP, Jackson, Charvel, Taylor, Martin, Fender, Ernie Ball, Marshall, EMG, B.C. Rich, Hartke, Orange, Shure, Avid / ProTools, UAL, etc., are there showing off their goods. Also there are the people who sell those instruments to the public through their local music shops, and online, as well as the many amateur and pro musicians.

There are thousands of guitars and amps, keyboards, and hundreds of drums, and cymbals, it's a musician's paradise, enough to keep anyone and anybody happy. The vibe is amazing, and it's so cool to see all the new instruments and technologies that these companies are coming out with. 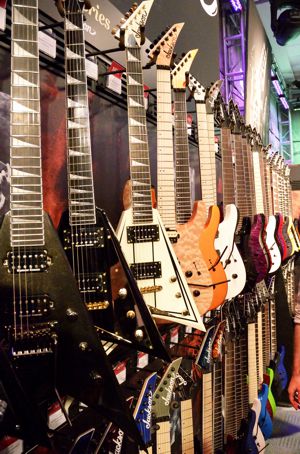 Some of the guys were hanging out and talking up their instruments with their endorsee's, and many were there for the jams like Bill Ward of Black Sabbath, Rikki Rokket from Poison, Brian Tichy from Whitesnake/Foreigner/Ozzy, Phil Chen who has played with everybody from The Rolling Stones to Jeff Beck, Kenny Aranoff from John Mellencamps band, Carmine Appice from Vanilla Fudge/Ozzy/Ted Nugent/Blue Murder/King Kobra, Corky Laing the cowbell king of Mountain's Mississippi Queen, Rowan Robertson of Dio, Phil Soussan from Ozzy, Joel Hoeckstra TSO/Night Ranger/Whitesnake, Traci Guns of L.A. Guns, and Eric Brittingham of Cinderella to name just a few.

Everyone is just hanging out having a good time, talking music like you do in your house with your friends over some brew, smoke, and a BBQ. Then there are the business deals that keep the machine rolling being made at their booths on the convention floors.

The coolest part for everybody from the vendors, manufacturers, music shop owners, and the pro musicians, is that the pro musicians are walking around mixing it up with everybody, talking, taking pictures with everyone, living, loving music, and everything about it, from cool new instruments and innovations at NAMM, technology, to different playing techniques, to amazing bands we've grown up with, what bands are coming out now, new music, and the amazing players and bands we've seen in our lives.

NAMM is really not only about cool live performances, partying with old friends and new, but it's about seeing new product lines from our favorite manufacturers. And this year a few things stood out for me at The Anaheim Convention Center.

Marshall, who is celebrating 50 years of the infamous, loved and revered Marshall Stack, has put out the 2555X Silver Jubilee Re-issue, which originally came out in 1987. This amp was in honor of Jim Marshall at the time for his 50 years in the music industry, and the 25th anniversary of Marshall Amps. This amp, Marshall is proud to point out, was used by Slash back in the Guns N Roses days because of its fat monster tone. Some of the features are that it has a 100w/50 watt valve head, three pre-amp valves, two foot changeable channels clean/rhythm and lead, 4 Celestian Vintage 70 watt speakers for a 280 watt total, and it also has a series effect loop and a DI output for a PA or for recording. The amp has a cool look with silver vinyl finish and a shiny silver faceplate.

Jim Marshall changed the rock business for the betterbonham and to the extreme; it's amazing who uses Marshall Amps, it's a "Who's-Who" of the music business. There is Angus and Malcom Young of AC/DC, Joe Perry of Aerosmith, Zakk Wylde of Ozzy and Black Label Society, Corey Taylor of Slipknot, Jason Hook of Five Finger Death Punch, Dave Murray, Adrain Smith and Janick Gers of Iron Maiden, Jeff Beck, Jimi Hendrix, Joe Bonnamaso, Joe Satriani, Lita Ford, Lemmy, Paul Gilbert of Racer X and Mr. Big, Randy Rhoads, Ritchie Kotzen of Poison and The Winery Dogs, and the list goes on for days.

DW grabbed attention as they usually do with their killer drums, and they rolled out their R40 drum kit especially designed for Neil Peart. It was on display to the amazement of the NAMM goers, and it was the actual drum set Neil will use on tour, which is pretty damn cool. The kit features artwork from previous Rush albums including 2112, and Moving Pictures, and each graphic is actually laser-cut into the drum.

DW also showed off its Romanian River Oak drum kit. The Bog oak that is used in the shell construction comes from the bottom of a Romanian river and is estimated to be in the area of 1500 years old. Neil Peart was so impressed with it that he was inspired to have his R40 drums made from this wood.

Ludwig drums, who have manufactured drums since 1909, and who supplied the drums for this years California Festival (Bonzo Bash/Randy Rhoads Tribute/The Ox and The Loon Who Tribute) had some really beautiful and classic rock drum sets such as the Vistalite transparent orange John Bonham (Zeppelin) kit which has a very present and powerful sound, filled with nice low mids and lows, and great attack for that clarity and cutting sound you want when your going up against a wall of big ass guitar sounds cranked out of a bunch of Marshall stacks. They also had the maple drum sets which are such a classic with that big, rich, warm, full, round, powerful sound, and the Copper Phonic Snare which has a huge crack and a warm sound as well. It's the first metal snare drum they have made in the U.S. in 20 years. Some of the artists using Ludwig Drums are Ringo , Joey Kramer of Aerosmith, Dave Lombardo of Slayer and Philm, Matt Starr of Ace Frehley and Mr. Big, Brian Tichy of Whitesnake, Ozzy and The Dead Daisies, Alex Van Halen and Alan White of Yes. 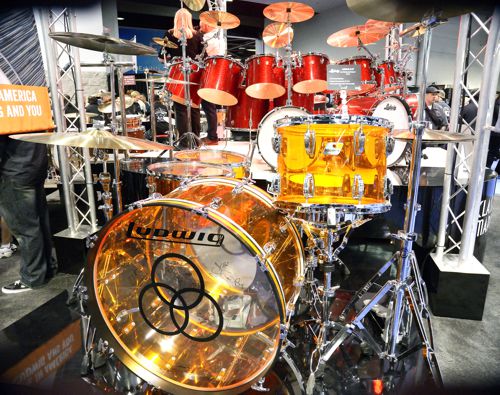 ESP Guitars are some of my favorite guitars not only because of their sound, which is biting, piercing, penetrating and chunky, not only for who plays them (George Lynch/Frank Bello (Anthrax)/ Alex Skolnick (Testament), and Marco Mendoza (Whitesnake/Ozzy/Dead Daisies), but also I think they have some of the greatest looking guitars and coolest graphics on the market. There are many great companies and beautiful looking and sounding guitars, but going through the ESP area which is so big you get something new and cool to look at every few feet really rocks my world. They generously put on show 80 hand made, unique, one of a kind guitars. Some additional ESP artists are Craig Goldy of Dio, George Lynch of Dokken, Lynch Mob, and KXM, as well as James Hetfield and Kirk Hammet of Metallica.

Fender also had some very cool guitars in very colorful, creative and energetic spaces at NAMM 2015 in Anaheim. The Dave Murray (Iron Maiden) Stratocaster which has a darker Sunburst finish, and a modern ripping sound because of three Seymor Duncan Hot Rail Humbucking neck and bridge pick ups for that familiar metal tone, a fast feel fretboard, and a high performance Floyd Rose Double Locking Tremolo bridge and nut. The guitar also has five way pick up switching for a wide array of ear shredding, ass kicking sounds, and to finish it off a an absolutely beautiful white Pearl Pick Guard. Murray uses this ax on stage with Maiden. Other artists who use Fender Guitars are Pete Townsend of The Who, Eric Clapton, Geddy Lee of Rush, Jeff Beck, Ritchie Blackmore of Deep Purple and Rainbow, and Jimi Hendrix.

When you have this many talented musicians in one place you know you're going to have a lot of killer jams going on. There is a main stage in front of The Anaheim Convention Center, with room outdoors for a couple of thousand people to see some great live music.

There also was The California Festival produced by Brian Tichy and Joe Sutton which is a series of three shows honoring John Bonham, Randy Rhoads, and Keith Moon and John Entwhistle of The Who at The Observatory up the road in Santa Ana, an absolutely crazy three days of incredible players playing amazing music, and the partying never stops. 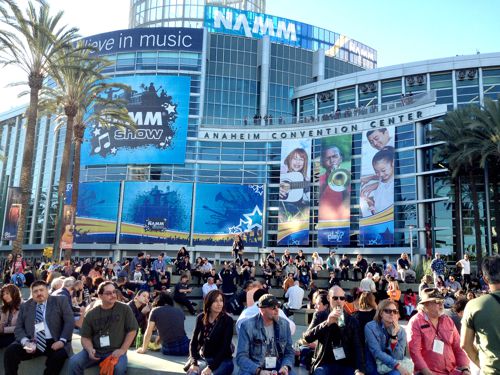