We're back in Anaheim, California, at NAMM 2015, right down the road from Disneyland, and it's that time of year for all things Bonzo. It's "Bonzo Bash" in honor of John Henry Bonham; the influential, ground-breaking, kick-ass drummer, groove monster and party animal for one of the baddest-ass bands ever to exist in all of rock....Led Zeppelin.

It's an amazing vibe here at the club, the energy is high and everyone is talking up a storm to friends and strangers alike in anticipation of the show. It feels like you're just hanging out at a buddy's house whose parents are gone for the weekend, and all these fucking amazing and cool musicians stop by to jam and party with you. The smell of weed emanated from both the front and back of the stage, and everyone had their fair share of beers, and shots of vodka, tequila, and Jack.

"Bonzo Bash" consists of about 25 guest drummers who get to pick a Zeppelin tune, and play it with the backing of The Moby Dicks band, which is Chas West on vocals (Bonham), Brent Wood on guitars (Vince Neil/ Sebastian Bach/Randy Rhoads student), Brian Tichy on guitars and sometimes drums, (Ozzy, Whitesnake, Foreigner), Michael Devin on bass (Whitesnake), and Stephen Le Blanc on keyboards. They are all truly amazing players; a solid unit together, tight and accurate as hell on the tunes, and they know how to play their instruments.

The "Bonzo Bash" show is produced and directed by both Joe Sutton, and Brian Tichy (drums, guitar) who entertained and played co-host Masters of Ceremonies to a happy and raucous sold out crowd, as well as friends and musicians on stage and backstage. A special mention also goes out to Noelle Kim, who works hard behind the scenes.

An amazing gathering of legendary and infamous drummers from around the world gather together here in Los Angeles to party their asses off, have a lot of fun hanging out with friends and other musicians, and play kick-ass music in homage of their trailblazing forefathers of rock and roll. 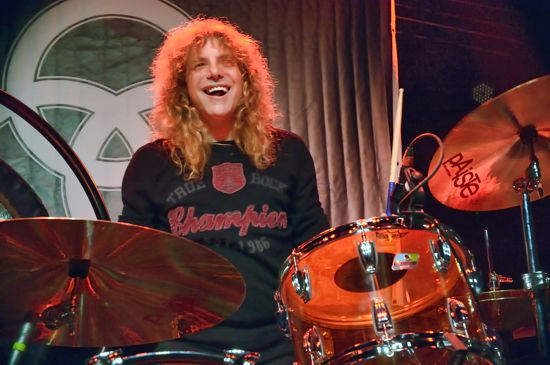 The show opens with an acoustical set from Rowan Robertson playing acoustic guitar (Dio), Phil Soussan on bass (Ozzy), and Mitch Perry on acoustic guitar (Michael Schenker Group), who all contribute vocals, and Joe Retta on vox (Heaven n Earth). They play "The Rain Song", "Goin to California", "Ramble On", and "Hey Hey What Can I Do", and they warm up the crowd big time, the vocals and guitars were powerful, crisp, dynamic and melodic, they really kicked ass. Seemes like people felt the show started of well.

Celebration day was a cool song to see and hear because Charlie Benante a drummer, yeah the one who gets a Bonzo Bash Legends Award that very night, played guitar, which I had never seen before. Brian Tichy was back on the drums for this song, and he really is an attack monster on the fucking drums, he beats the shit out of em, and has such a damn good time doing it, not to mention the crowd which has been loud and crazy all night. Chas Wests' vocals were spot on again hitting some killer high end notes, and Brent Woods and Michael Devin were firmly in the groove. Benante wasn't done with just that song, he jumped on drums to play Dazed and confused, and did an admirable job.

Kenny Aranoff from John Mellencamp's band performed the epic "Rock n Roll" from Zep IV with James Lomenzo of White Lion on bass, Phil X from Bon Jovi on guitars, and Chas West once again rockin' the song to the smoke filled rafters. The band hit it out of the park on this song, exceptional rendition, and Kenny blew me away with how powerful a drummer he is. Hit the groove solid, and beat the fuck out of those drums. No shit.

Stairway To Heaven was a song that came off really well with not one, but two Gibson SG double neck guitars, like Jimmy used to play, being played at once, by Brian Tichy and Brent Woods, and it sounded really cool, rich and full. Dave Lombardo and Chris Wyse were a great rhythm section, cleanly holding down the bottom end, and it sounded first-rate. And Chas West nailed the vocals which are notoriously difficult to sing.

Another amazing group came on stage to play and the crowd went batshit crazy for them; It was Burning Rain, which is Doug Aldrich from Whitesnake on guitars, Matt Starr from Ace Frehley and Mr. Big on drums, Sean McNabb of Dokken on bass guitar, and Keith St. John of Montrose on vocals, and they shook the fucking house on "In My Time of Dying". These guys are an actual band and they sound every bit of it. They were tight, powerful, dynamic old school with, big guitar sounds, huge pounding drums you expect from Matt these days, and driving, edgy, melodic, grooving' rhythm guitar pieces with some exceptionally tasteful shredding on the leads. Sean holds up the low end really well with a nice fat bass tone.

Being The Bonzo Bash, there is an award to be handed out to a drummer that is of legendary proportions, The Bonzo Bash Legends Award. It's an award acknowledging excellence, innovation, influence, origination and inspiration on the throne of rock drumming. The very first recipient of honor was Peter Criss of Kiss. Then Carmine Appice (Vanilla Fudge, Ozzy, Ted Nugent, Rod Stewart, Jeff Beck) won the second Bonzo Bash Legends Award. Last year the third "Bonzo" award went to one of the pioneers, the Grandfather and Godfather of hard rock, and metal drumming, Black Sabbath's Mr. Bill Ward.

This year Bill Ward, Carmine Appice, Corky Laing, Brian Tichy and Joe Sutton gave out two awards instead of the usual one, and they went to celebrated metal drummers Dave Lombardo of Slayer, and Charlie Benante of Anthrax; two great drummers who were innovators and originators. They both have inspired and influenced many in the metal genre for a long time now, and have wide respect throughout the music industry.

The show closes with "When the Levee Breaks" from Zep IV, behind a massive confetti rain jam as all hell seems to break loose one more time on stage. The show is over with the crowd cheering, pumped up hard by the experience, satiated by the music, the crowd, and wasted on booze and smoke that permeated the air.

And in addition for a little bonus it was Steven Adler's (Guns n Roses) birthday, he turned 50, and he looked and sounded great when he played, "All of My Love". His smile still lights up a room, and the crowd really loves him.

Great show can't wait til next year again. Now pass the Jack and don't knock over the bong. 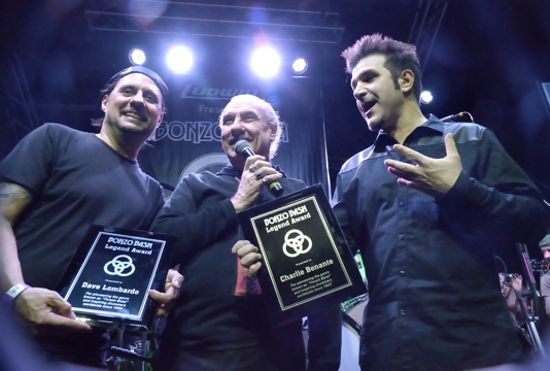