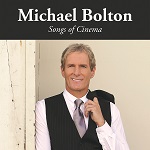 Michael Bolton to release his 27th album, Songs of Cinema a tribute to beloved songs from the world’s most iconic films on Febuarary 10, 2017 on the Frontiers Music Srl Label.

“I’ve always been a huge fan of the movies, says Bolton.”  “I love all the classics from Casablanca to The Wizard of Oz.” Most are familiar with Bolton’s feature in The Lonely Island Emmy-nominated viral video Jack Sparrow, but the ballad version created for this album will be a pleasant surprise.

Bolton has a track record of stepping up to render his own versions of classics, like Grammy-winning hit “When a Man Loves a Woman,” presented here with yet a new interpretation. As a singer, he has a unique passion and gift for exploring new repertoires, from rock and pop to R&B. And as a true artist, he always keeps pushing the boundaries across genres.

Michael Bolton is a multiple Grammy Award-winning Singer, Songwriter and Social Activist, who has sold more than 65 million records worldwide.  In recognition of his artistic achievements, Michael won 2 Grammys for Best Pop Male Vocal Performance (nominated four times), 6 American Music Awards, and a Star on the Hollywood Walk of Fame.  As a songwriter, he has earned over 24 BMI & ASCAP Awards, including Songwriter of the Year, 9 Million-Air awards, and the Hitmakers Award from the Songwriters Hall of Fame. To date, Michael has had 8 studio albums rank in the Top Ten, with 9 #1 singles.

Track Listing For Songs Of Cinema:

1. When a Man Loves a Woman

from…When a Man Loves a Woman

from… Stand By Me

4. I Will Always Love You (feat Dolly Parton)

from… The Body Guard

6. I Heard it Through the Grapevine

from… The Big Chill

8. Somewhere Over the Rainbow

from… The Wizard of Oz