Bat Out Of Hell (Musical)

Now it's an ambitious thing to do take on a musical made up of songs sung by Meatloaf in his prime, but with the actual involvement of Jim Steinman the expectation was that the result would be epic - and it was. Personally, I am not a big fan of group dancing in musicals, mercifully there is not too much of that, instead there were well choreographed scenes, nicely done motorbike animatronics, beautifully shot atmospheric camera work projected like rococo paintings onto the backdrops and voices like you would not believe. The hairs on the back of my neck stood up constantly throughout the performance in a good way.

Fortunately, the plot avoided the temptation to be too much of a 'Romeo & Juliet' rewrite... these days tragedies are out of fashion in our need to be mollycoddled world... but given that the show was constructed around the songs, the plot had its moments of tragedy and was not too saccharine or unbelievable as musicals go. Themes of alienated youth, well-meaning but stifling authority and the course of true love dominated. However, the real reason to see this musical was definitely the voices and the songs.

For me, a definite highlight was the amazing voice of Danielle Steers as Zahara; deep and rich like Cher once she began to sing classics like 'Two Out Of Three Ain't Bad' and 'Dead Ringer For Love', she commanded everyone's attention and created one of a number of my goose-bumps moments. However, Sharon Sexton as Sloane also possessed an amazing ballsy voice when she was going at it full throttle in 'Paradise By The Dashboard Light'. For the supposed parents in this story, the temperature was sent soaring by this sexy duet and this mature sexuality was far more appealing than the kitten-like virgin sexuality inherent in the part of the heroine Raven. Yet, despite the obvious Disney princess comparisons with the Raven part, the voice of Christina Bennington transcended that cliché. A real songbird in the old-fashioned theatre sense, she sang like the proverbial lark, light and high, but she was also able to summon powerful, forceful, passionate Rock 'n' Roll from the nether regions when required – ideal for the part of the conflicted Raven.

Rob Fowler (from the rock band Morton amongst other things) as the well-meaning but (at times) evil father Falco was my favourite male; Seemingly effortless but amazing Rock style singing, he also showed he was not afraid to take one for the team when he jumped into the pond and got soaking wet before he had to perform a strenuous number. However, that is not to take away from Reuben Van Kerr as the lead 'Strat' who, when he got going, absolutely nailed it during such difficult to perform numbers like 'Bat Out Of Hell', 'For Crying Out Loud' and 'I'd Do Anything For Love (But I Won't Do That)' with truly awesome punch. If he can do that now, what will be capable of when he matures? One to watch! Supporting males Dom Hartley-Harris and Giovanni Spano also deserved honourable mentions for their great voices and contribution.

I must also mention the musicians and I particularly noticed the great Rock 'n' Roll piano. It was also nice to see them take part/perform a mock exodus out of the pit with broken instruments following the car crash into the pit; it was truly an original and amusing moment.

Musicals have their limitations as a medium. I always go with a hint of trepidation. Go to see this with no such fears. It is not Meatloaf but it will not scar your memory of the great 'Bat Out Of Hell' record. Instead, it will give you great memories of a night well spent in the theatre in the presence of awesome talent. Do not miss!

Review and photo by Dawn Osborne 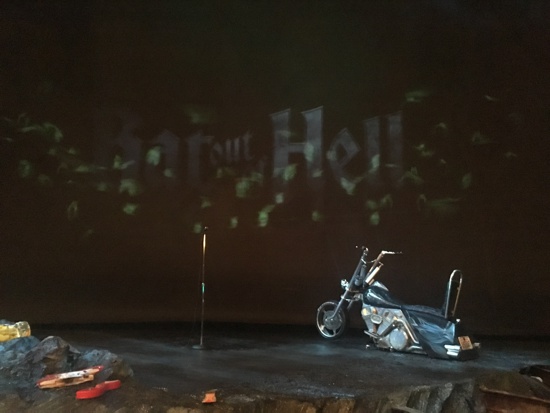