Alice Cooper / The Mission / The Tubes

Whoever would have thought that, after forty odd years, the original Alice Cooper members would reconvene and, even better, play together in the UK for the first time since the very early seventies. Not me, that's for certain, but you have to wonder if Santa Claus or the wish fairy (?) do actually exist as, sometimes, miracles do happen.

Preceding these live dates, of course, we had the release of Alice's latest album 'Paranormal' which this tour was promoting, and on that we had two new tracks recorded by the "old guys" as well as collaborations on other tracks. Therefore, the scene was set. Before the big event, however, we had the support bands and the bill was pretty good, although, to be honest, I had never seen either band before.

However, I did know about The Tubes and mainly lead vocalist Fee Waybill who, in the band's earlier days, raised more than a few eyebrows. Things have changed over the years and antics do not shock as they used to, but for 'White Punks On Dope', in the guise of Quay Lewd, Waybill still caused a stir, partly because people were never quite sure if he was going to fall off his platform boots or not. I didn't catch the very beginning of their set, but what I did see, I quite enjoyed, including 'Turn Me On', 'What Do You Want From Life?', 'I Was A Punk Before You Were A Punk', 'Talk To Ya Later' and a Punked-up version of The Beatles' 'I Saw Her Standing There' which was a bit of a surprise, but seemed to delight the crowd. 'White Punks On Dope' was the last number, where Fee returned to the stage in his Lewd gear and indeed, he almost fell off the boots.

Next up was another band I had never seen or heard before. The Mission were originally called The Sisterhood when two members of The Sisters Of Mercy, who were based in Leeds, left to do their own thing. Of the two, front-man, Wayne Hussey still remains, and alongside long-time guitarist Simon Hinckler, they played such songs as 'Tower Of Strength,' 'Beyond The Pale', 'Can't See The Ocean', 'Butterfly On A Wheel', 'Met-Amor-Phosis' and 'Deliverance'. I quite enjoyed them, but did think at times they sounded too much like U2 and that Hussey looked like Peter Capaldi as Dr. Who. Again, the audience was very appreciative, and it was nice and probably unusual, to see two such well-established bands in a supporting role.

Then it was time for the main event. I have seen Alice Cooper on every tour since 1982 but, with most people, if not all here tonight, I had not seen the original band when they toured in the early seventies. This has always been a regret, but tonight I would see the band play together for the first time (possibly second, I think they may have got together in May to do a small gig in the US) since the early seventies, well in the UK at least. However, that was later. First up was Cooper with his current band and, as always, they produced a consummate and enjoyable show. 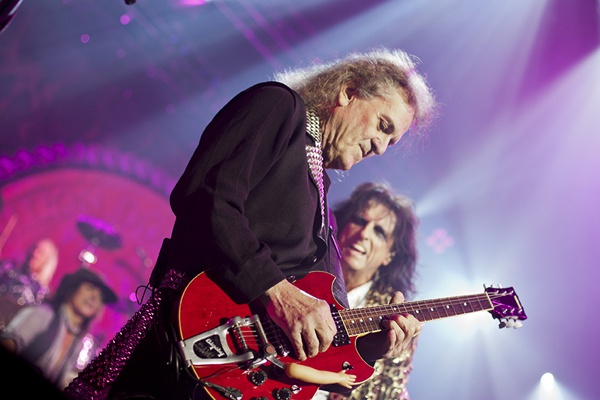 Coming on with 'Brutal Planet' under a curtain of sparks, they proceeded to play favourites including 'Poison', 'Feed My Frankenstein' (complete with towering monster), 'Cold Ethyl', 'Only Women Bleed' and two of my all-time favourites in 'Under My Wheels' and 'Halo Of Flies', the latter saw Cooper conducting the guitar ensemble and, had it not been for the extra personnel that were on later, this would have stolen the entire show. 'Halo...' also incorporated Glen Sobel's drum solo which sounded really good as it was accompanied by Chuck Garrick playing the bass line and therefore remained structured and part of the song it was featured in. I have always said that this group of musicians have always gotten the sound of the original band material just right, and this was just stunning. There were some songs that hadn't been played live in the UK for a while, 'Lost In America', 'Department Of Youth' and 'Pain' from 'Flush The Fashion' which I cannot remember having heard live before. 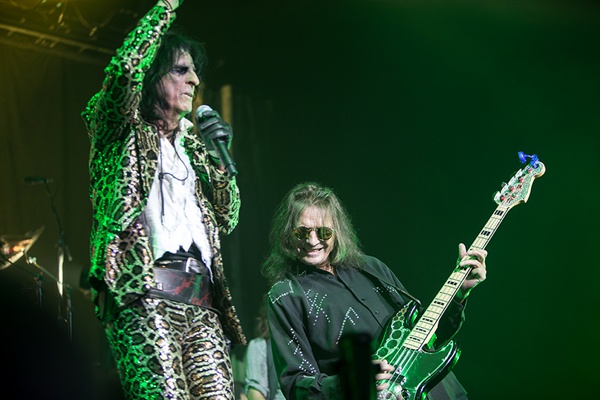 Oddly, there was only one song from the latest album, namely 'Paranoic Personality' which immediately preceded the excellent and straight-jacketed 'Ballad Of Dwight Fry' (Cooper tormented by the nurse, played by his wife Sheryl, who I mistook for their daughter Calico), 'Killer' as Cooper lost his head and the end part of 'I Love The Dead'. This heralded the departure of members of the current touring band, apart from Ryan Roxie, who remained to play the late Glenn Buxton's guitar parts, and the appearance of the original guys ("OGs" as Cooper called them) – Neal Smith on drums, Michael Bruce on guitar and Dennis Dunaway on bass who appeared to have retrieved his old "frog" bass guitar, and they proceeded to tear through 'Eighteen', 'Billion Dollar Babies', 'No More Mr. Nice Guy' and 'Muscle Of Love' which I also don't remember hearing live before. The "new" guys then came back, and all of them finished with 'School's Out' which involved confetti, bubbles, giant balloons, Cooper's 'Elected' suit and hat and a whole life full of memories. 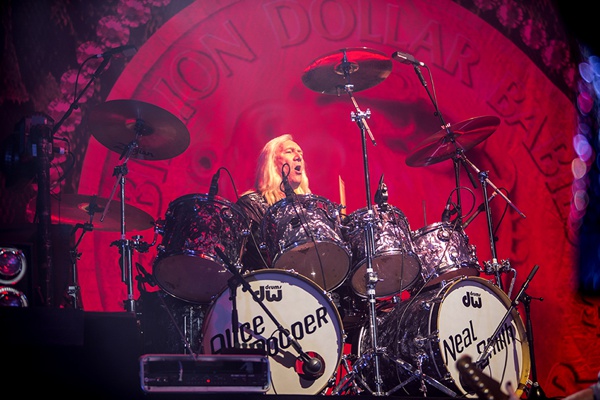 Really, if you are an Alice Cooper fan and you didn't get to see any of these England dates, you missed something special. I wasn't aware until after the event that the dates in England and Scotland were the only ones that the original guys were playing, and Leeds was the first, so five points to all that attended. A real event and one to tell the grandkids about, and annoy all your mates that didn't go.

Review and photos by Andy Brailsford