After having had the chance to see Anneke van Giersbergen's new band VUUR ("fire" in Dutch) several times when they opened for Epica last month across Europe, I was really looking forward to seeing them as headliners. I went to two of the four gigs they played (France, Belgium, UK and the Netherlands) in early December and let me tell you few words about their concert in the lovely city of Utrecht in the Netherlands.

I've always been absolutely fascinated by Anneke van Giersbergen, both as an artist and a person. She started at a very early age in The Gathering during which time the band explored both Progressive and Atmospheric Metal, and delighted us with amazing songs like 'Strange Machines', 'Saturnine', 'Eleanor' and 'Broken Glass', all of which stick in the memory to this day. It has been nearly ten years now since van Giersbergen left that band and since then she has led several projects, including Agua De Annique, The Sirens, The Gentle Storm (with Arjen Anthony Lucassen) and now VUUR; the latter being a collaboration with the talented guitarist Jord Otto (My Propane, Revamp). This new band has been founded to enable van Giersbergen to concentrate and highlight the heavier aspect of her career and with this new album and vehicle she has rightly claimed to have delivered the most "Progressive Metal" album of her career so far.

For all these reasons, I was really excited to be able to drive over to Utrecht to attend this very promising concert, especially after the disappointing one in Paris due to a rather short set and a bad venue ('Le Trabendo'). I have to say I wasn't disappointed this time. This live performance was absolutely mind-blowing and the whole group shone on stage in front of an amazing, almost-sold out audience in their home country.

The two support bands, My Propane and Scar Symmetry, played respectively twenty-five and fifty-five minutes. Both bands were interesting to listen to, but not necessary my cup of tea. However, they did the job as openers and the crowd looked pretty much into it. 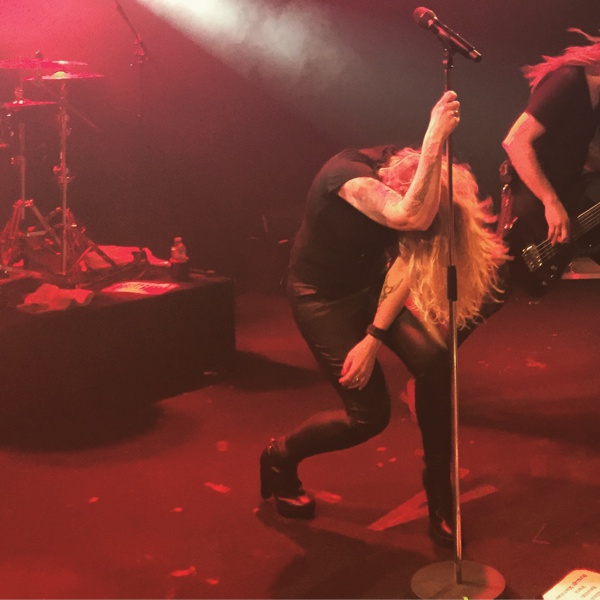 VUUR opened their set with 'Time – Rotterdam' from their new album ('Now We Are Free – Cities') which they were promoting on this tour; it contains eleven songs all of which cover cities that van Giersbergen had visited and inspired her. Onstage, I recognized some very familiar faces in Ed Warby (The Gentle Storm), Otto (Revamp), Ferry Duijsens (The Gentle Storm) and Johan van Stratum (Stream Of Passion, The Gentle Storm). It was such a pleasure to see that van Giersbergen had invited some friends and ex-colleagues to accompany her on the album and the live stage through this new formation and it was easy to see that they were having fun being together, especially as they know each other pretty well. Marcela Bovio (Stream Of Passion, The Gentle Storm) unfortunately was not part of things as she decided to leave at the early stage of the VUUR adventure.

The music was heavy, loud and definitely powerful. After only few minutes we all dived into it. There was no orchestration, only bass, drums and guitars (mostly two, sometimes three if van Giersbergen was playing). The show opened with 'Time – Rotterdam' and 'Sail Away – Santiago' – which van Giersbergen introduced in Dutch obviously – and this pair was followed by The Gathering cover 'On Most Surfaces'. It was the first time I had seen this one played live and it was amazing to see how connected she still is with her past experiences. The excellent 'My Champion – Berlin' came next and then there was an airing for 'The Storm' (Gentle Storm cover) where Bovio was definitely missing. For me, it is still one of the best songs from that album and it was very nice to see it played once more. 'Save Me – Istanbul' and then 'Days Go By – London' were also played. This latter was the first single to be released last summer and I remember being already very excited about it at the time. 'The Martyr And The Saint – Beirut' appeared next and then they played 'Fallout' (a Devin Townsend Project cover). Last summer, van Giersbergen was invited several times by Devin Townsend to join him onstage for several festivals as she has contributed a lot to his music over the past few years – something that also shows how rich her career is. The amazing 'Your Glorious Light Will Shine – Helsinki' once again amazed me before 'Freedom – Rio'. Before the encore, VUUR played the super-famous 'Strange Machines' during which the whole audience jumped, headbanged and sang along. This twenty-two year old song has not dulled with age and its efficiency on stage cannot be contested under any reason. For the encore, VUUR played 'The Fire – San Francisco' and 'Reunite! – Paris' which obviously resonated with me as I come from there. 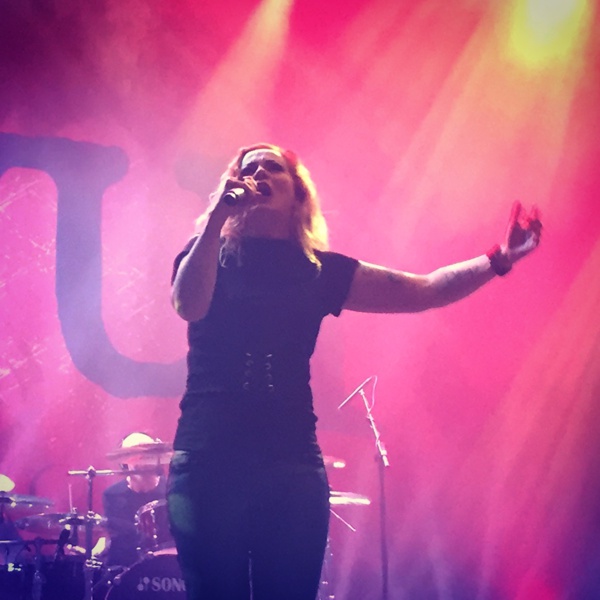 After one hour and thirty-five intense minutes, van Giersbergen very sincerely thanked the audience for being there as well as her own band. The massive moment of clapping that followed showed how nice a moment this was for all of us.

This was the last concert of 2017 for me and one of the bests of this year. I am already looking forward to seeing VUUR perform live again as they will hit the European roads next year. I recommend you all to take a bit of your time to attend one (or more!) of their shows.