When I saw the dates for the very short Five Finger Death Punch UK tour, I was disappointed they had not included Manchester. However, I'd never been to the Arena in Leeds so decided a few extra miles wouldn't kill me and it would be another venue to add to my (ever growing) list. 2017 has been an eventful year for Five Finger Death Punch. Legal battles and personal issues have made the headlines, but everything seems to have now settled down on the back of a 10th anniversary celebratory compilation entitled 'A Decade of Destruction'.

The bonus for me tonight was the inclusion of In Flames in the special guest support slot. I haven't followed the band religiously during the last twenty or so years, but was fortunate enough to review the 2016 'Battles' album, possibly their most commercial and accessible release to date. It is obvious In Flames are also taken with this album because, even with a dozen albums worth of material to choose from, more than half the set was taken up with newer songs. The line-up has undergone a few changes in recent years, with singer Anders Friden and guitarist (originally drummer) Bjorn Gelotte the only original members. In Flames had great energy and the light show and screens certainly added to the spectacle. The sound was big, but seemingly too big for Friden's vocals. I caught the first four songs from the photo pit and the rest of the set from the seated area and though they entertained, they did not impact as I was expecting. Even the crowd responses were muted and this did not go un-noticed; Friden commenting at one point that he felt like a teacher in front of a quiet classroom. The interaction with the crowd was minimal for the most part and there was very little between song banter. As a band leader, Friden came across as too reserved and though musically I enjoyed what I saw/heard, it was more a case of style than substance. 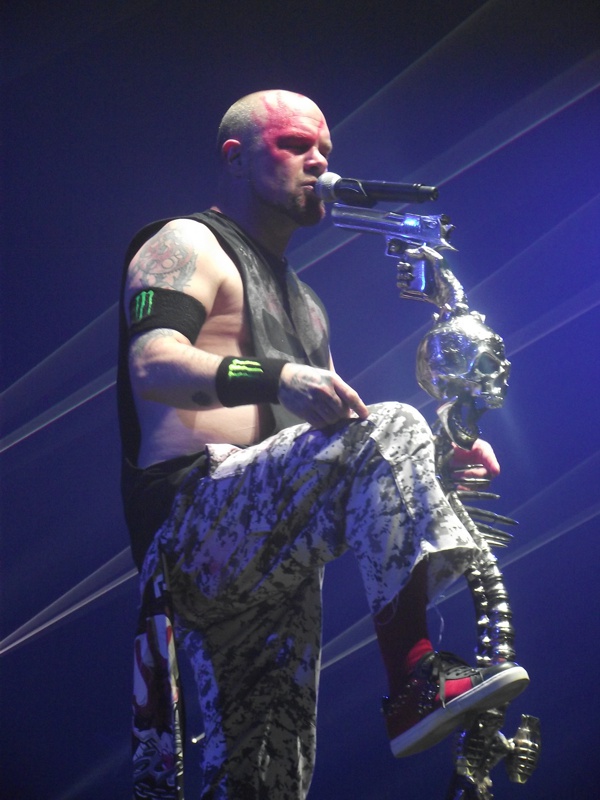 Five Finger Death Punch took to the stage like returning heroes. The number of t-shirts on display was a clear indication of the band's popularity (though even I balked at the £30 tour shirt asking price) and from the opening 'Lift Me Up' through to the closing 'The Bleeding' they could do no wrong. The sound was in-your-face but clear as a bell and I was again fortunate enough to witness the opening few songs from just a few feet away from the stage. Lead singer Ivan Moody seems to have caged his inner demons for now, but still prowled the stage like a demonic ring-leader. What may surprise those unfamiliar with the band (or those not willing to give them the time of day based on reputation alone) is that the guy can sing, he mixed melody and menace with ease. 'Wash It All Away' and 'The Wrong Side Of Heaven And The Righteous Side Of Hell' transcended musical boundaries and the choruses would be at home amongst many of Melodic Rock's finest back catalogues.

Lead guitarist Jason Hook was as cool as they come, and he played some sublime solos on the back of some intense riffing. Rhythm guitarist Zoltan Bathory was the perfect foil for Hook and his riffs bolstered the sound, his dreads coming closer and closer to getting entangled with his guitar strings as he banged his head furiously. Bassist Chris Kael and drummer Jeremy Spencer laid down a rock-solid foundation, Kael even found time to flip the finger several times during the course of each song (thanks Chris... nice photo). 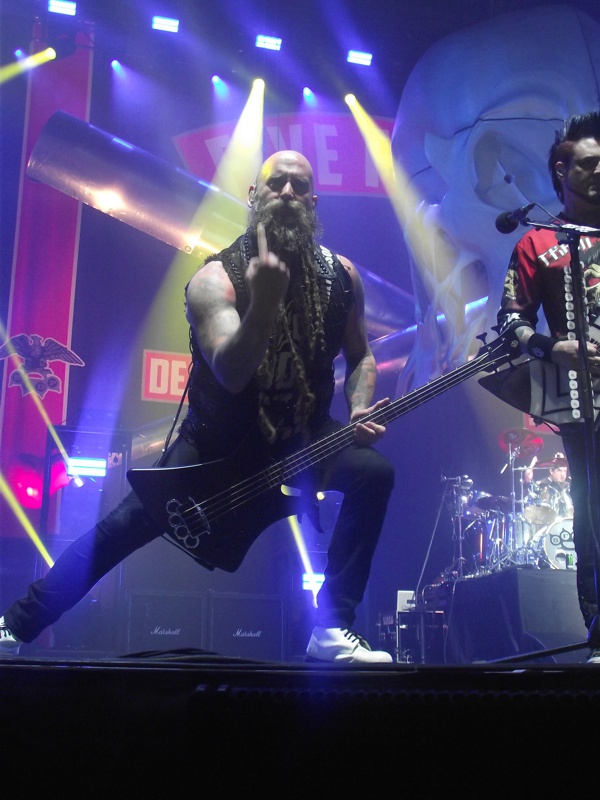 The crowd knew every single word and got ample opportunity and encouragement to sing along. The cover of Bad Company's 'Bad Company' demonstrated the band's versatility and the mid set four song acoustic section gave everyone aside from Hook and Moody a breather. A broken guitar string caused Moody some amusement but phased the unflappable Hook not one bit and he adapted without concern. Moody brought twenty or thirty fans from the audience to take part in a rousing rendition of 'Burn MF' and he even elicited a brief Mexican Wave from the upper tier, just because he could. 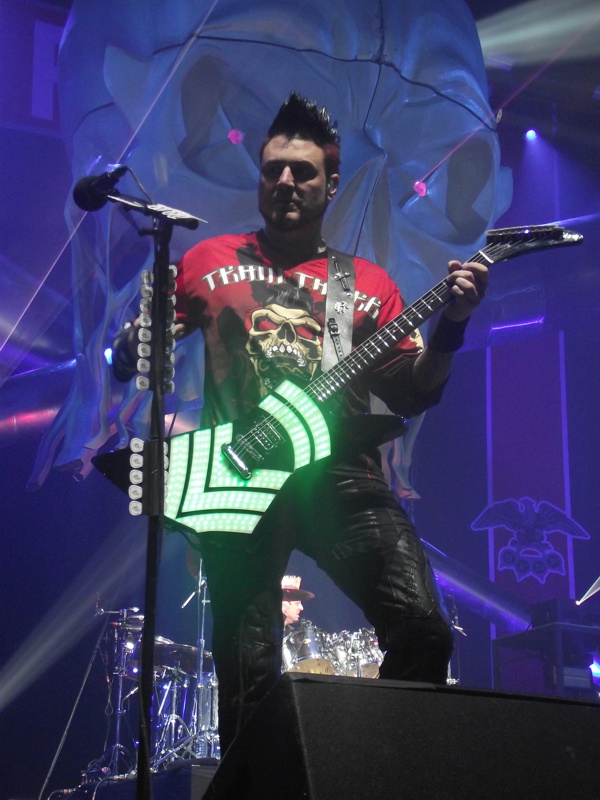 Though the set contained just fourteen songs and lasted for just seventy-five minutes, I don't think anyone felt short-changed. The time flew by and the energy levels never dipped. Watching the circle pit in the standing area from the relative safety of the seats, it was clear that some crowd members burned off more calories than others, but I was content to watch and listen and never spilled a drop of beer. I fully appreciate that Five Finger Death Punch's incendiary musical approach will float only a few Fireworks/Rocktopia readers' boats, regardless of the highly melodic arrangements and choruses. Without hesitation, I can stipulate that I'm on board and will be in attendance again when the Death Punch roadshow pulls in to town (whatever town that may be). 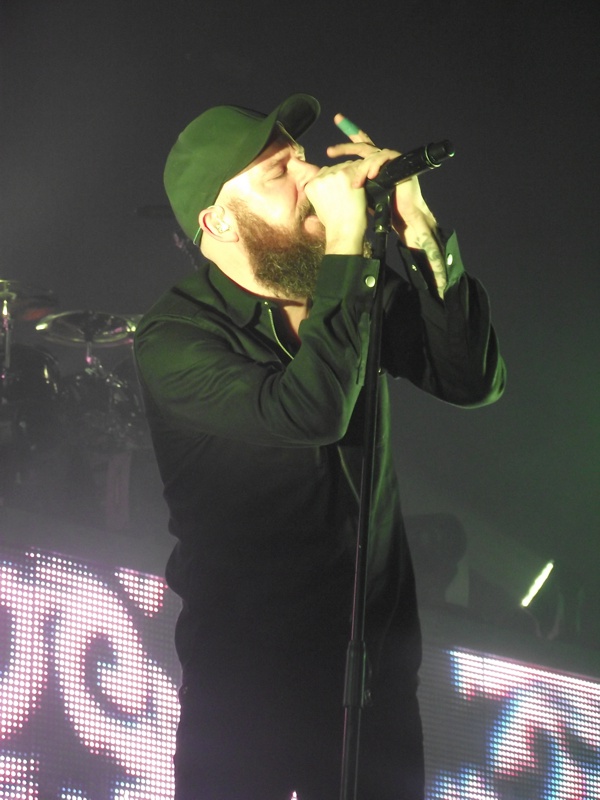