For me personally this was the perfect Funk Rock pairing and would have been just as popular twenty-seven years ago. It seems that I was not alone in my opinion, as this was a sold-out show. 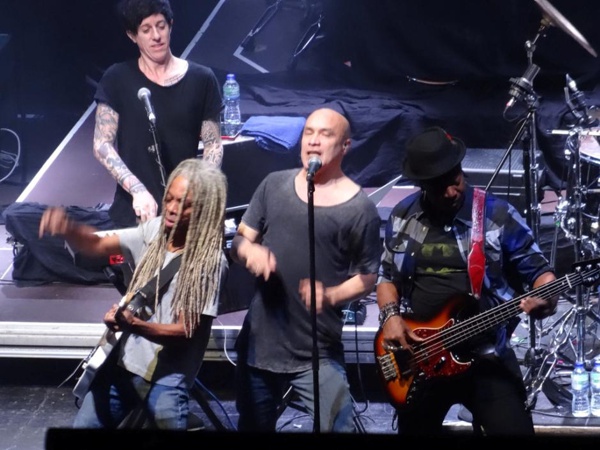 Dan Reed Network arrived on the stage at just gone 7.30pm with hundreds of fans still queuing to get into the venue. We all appreciate security checks are a necessary evil these days, however, surely the doors should have opened earlier, or the first band come on later? The Funk was evident during 'Under My Skin' and the superb 'Forgot To Make Her Mine' courtesy of bassist Melvin Brannon II and keyboard player Rob Daiker. 'Baby Now I' got the Academy rocking and Dan Reed even teased us with a bit of Frankie Goes to Hollywood's 'Relax' before the band took their foot off the gas with the beautiful ballad 'Rainbow Child'. Dan Reed even took time to drag their tour manager on stage to take the audience's applause. The only new song played tonight was one of my favourites from last year, the sublime 'Champion', which featured a blistering solo by the much-underrated Brion James, who frequently made his way front and centre-stage to strike a pose and remind us all that The Network rocks with the best of them. Dan Reed was very respectful to the headline act and played as if only a few in the crowd knew the band; contrary to that, the majority were obviously huge fans. I've seen this band several times since their reformation and they just keep on getting better and are equally at home in front of a few hundred people, or like tonight, a few thousand. 'Ritual', one of my all-time favourite Dan Reed Network tracks, preceded the funktastic 'Get To You'. The band all came front and centre to take an expected and deserved curtain call, however, remained on stage to treat us to an emotional, A Cappella, version of 'Long Way To Go'. This was a simply stunning start to the evening. 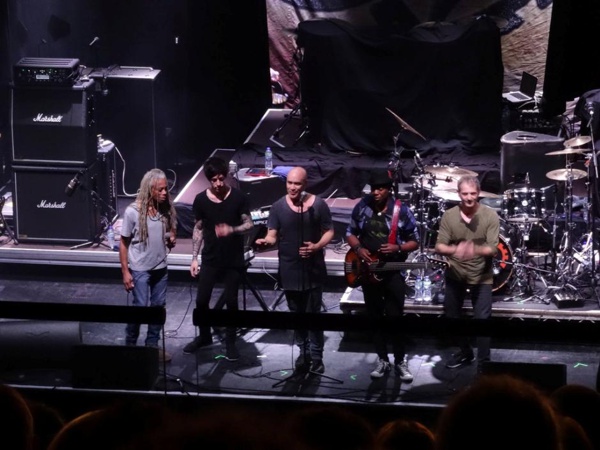 Inexplicably, we had to wait fifty minutes for Extreme to hit the stage, but as they say, it was well worth it. 'It's A Monster' was the apt title of the opening track as the band came out of the blocks firing on all cylinders and did not drop the intensity for the next two hours. Anyone thinking that Extreme are just a ballad band would have had that theory dispelled in the first half hour as they rocked the house to the ground with the likes of 'Li'l Jack Horny', 'Get The Funk Out', 'Rest In Peace', 'Hip Today' and 'Kid Ego'. If this was a race, then you could have been forgiven for thinking that the band had set off too fast and would not be able to keep up the pace; conversely, they simply just kept building on the momentum. At times, it was difficult to know where to look, the exceedingly dexterous Gary Cherone was all over the stage and could still hit every single note, whilst bassist Pat Badger and guitarist Nuno Bettencourt regular swapped stage positions, as drummer Kevin Figueiredo kept perfect time throughout. Those unfamiliar with Cherone, think of a cross between Stephen Tyler, Mick Jagger and Stephen Pearcy and you will have a good idea. 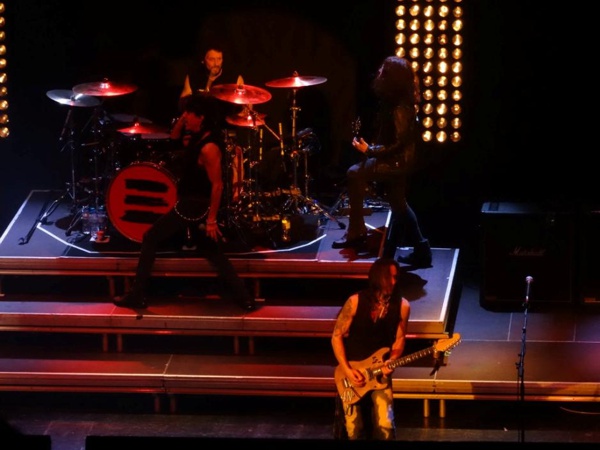 The magical 'Play With Me' included a drum solo by Figueiredo, whose mentor was former drummer Mike Mangini (now with Dream Theater), along with guitarist Bettencourt on a small kit. They played in perfect syncopation. Bettencourt addressed the crowd all evening and came across as warm, humble and self-deprecating; the females in the audience seemed to be going ga-ga over him (go figure?).

He joked that he often overplayed his solos but had agreed with the promoter to be paid per note on this tour and it was time to make some money, Cue, a blistering and breathtaking solo during 'Tragic Comic'. All four members then came to the front of the stage for an acoustic version of 'Hole Hearted'. It was evident that the band was genuinely moved by the crowd reaction, citing Leeds as the city where the band finally broke in terms of Hard Rock. 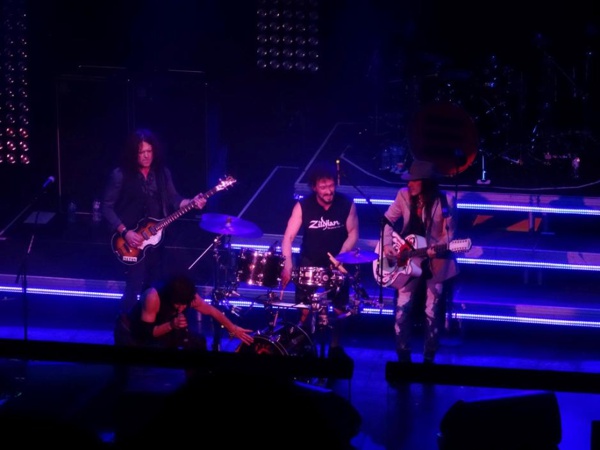 Bettencourt continued to solo like there was no tomorrow during 'Midnight Express' and 'Cupid's Dead'. Badger's contribution to this band (similar to that of John Entwhistle in The Who) should not be underestimated and the harmonies he and Bettencourt provided were sensational. 'Am I Ever Gonna Change' preceded the Bluegrass 'Take Us Alive' before the excellent 'Stop The World'. The speed of Bettencourt's left hand had to be seen to be believed during 'Flight Of The Wounded Bumble Bee', the song effortlessly segued into the raucous 'He-Man Woman Hater'. The atmosphere went into overdrive with 'Decadence Dance', my favourite Extreme song (and a perfect opening song for a mix tape). Possibly this should have been reserved for the final encore?

The band left the stage for a few minutes before Bettencourt and Cherone returned, perched on stools at the front of the stage. They said that it had come to that time of evening and that song at which point Bettencourt cheekily started to play 'Stairway To Heaven'. He stopped briefly before Cherone chipped in with, "There's lady I know..." Of course, they reverted to their big hit from 1991 and allowed the two thousand, three hundred capacity crowd to take over. Amazingly, knowing my own vocal prowess (or rather lack of it) 'More Than Words' was sang in perfect harmony and was one of those lump in the back of the throat moments. 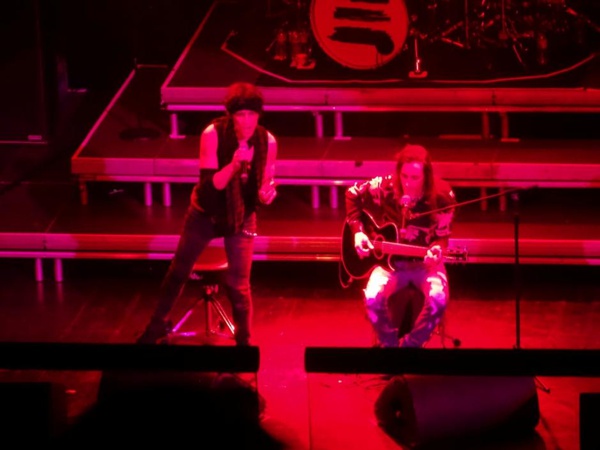 The hard rocking 'Warheads' and 'Peacemaker Die' from 'III Sides To Every Story' paved the way for the finale of the Queen cover 'We Are The Champions'. 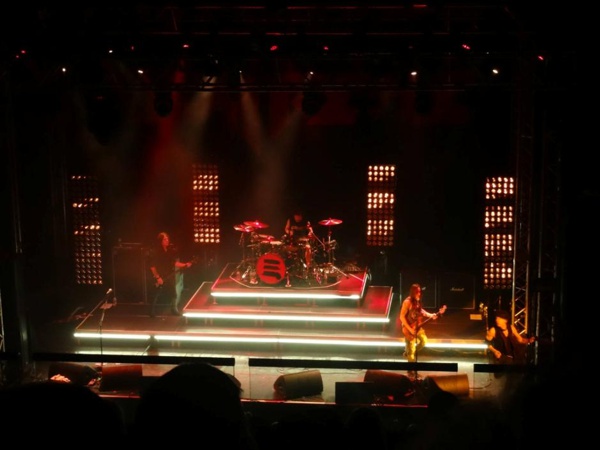 Individually, the four band members are at the top of their respective instruments but together they are simply breathtaking. The band is not called Extreme by accident; one of the tightest bands I have ever had the privilege of witnessing live.