Lacuna Coil have just finished a massive tour to promote their last album ('Delirium') and for here they were joined onstage by Anna Murphy (ex-Eluveitie) and her new band Cellar Darling. I could not miss this opportunity at the end of November of such a nice evening in Toulouse and in the beautiful Metronum venue.

This was actually the second time I had seen Cellar Darling perform this year, having seen them earlier this year as part of Delain's 'Danse Macabre' tour. However, they played only twenty-five minutes as first openers for that tour, for this one with Lacuna Coil they were the main support act and thus I had the opportunity to see them perform for fifty minutes and they played nearly the whole of their 'This Is The Sound' album that came out last June. To me, this record is one of the best of 2017 and Cellar Darling have a lot to give on stage, thanks to a heavy sound, nice melodies and their talented singer. Tracks like 'Avalanche', 'Black Moon' and 'Six Days' are "must-have" selections in a Symphonic Metal library. It was a pleasure to see them once again, and the crowd appreciated the show as well. I can't wait for the next time they are on the road again. 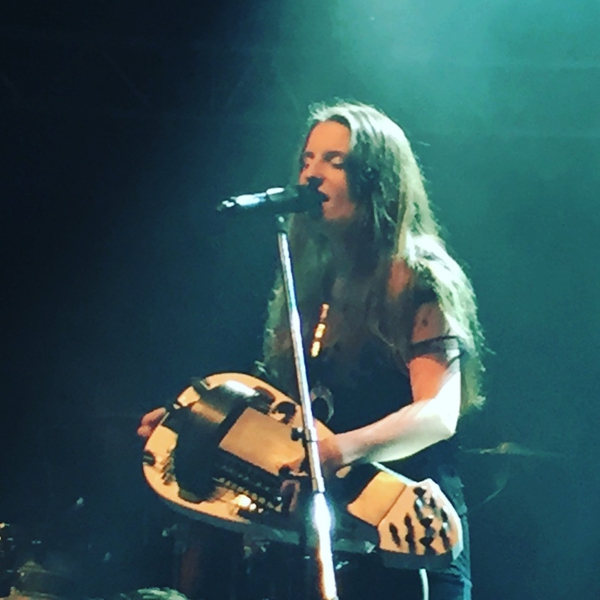 Lacuna Coil organized the stage in a way that meant they lost nearly thirty percent of the venue's capacity. However, the circular shape of the backdrop and the graffiti everywhere reminded everyone clearly of the 'Delirium' theme – psychiatric hospital, mental illness and troubled minds. The band came on stage with psychiatric patient outfits – featuring white and dirty clothes and scary make-up for most of them – and oppressive behaviour – deep eyes, weird moves and a few heavy words to the audience. I dived immediately into it and I felt oppressed and under a dark pressure during their opening song 'Ultima Ratio'.

The atmosphere the band wanted to set up was been a big success for me. It could have looked like a bad theatre play, but everything seemed well calculated and that proved to be terribly efficient. Christina Scabbia is as talented as she is charismatic onstage, and that included the perfect English that she welcomed us in this "House Of Shame". Some songs were amazingly heavy and loud including 'Die & Rise', 'Kill The Light' and 'Ghost In The Mist'. 'Delirium' was also massively represented with selections from the new album such as 'Blood, Tears, Dust', 'My Demons' and 'Downfall'. Of course, some successful earlier numbers couldn't be avoided and they ticked this box with the likes of 'Enjoy The Silence', 'Nothing Stands In Our Way' and 'Naughty Christmas'. The seventeen song show (that lasted nearly two hours!) ended with 'The House Of Shame' which provided the final explosion of this musical evening. 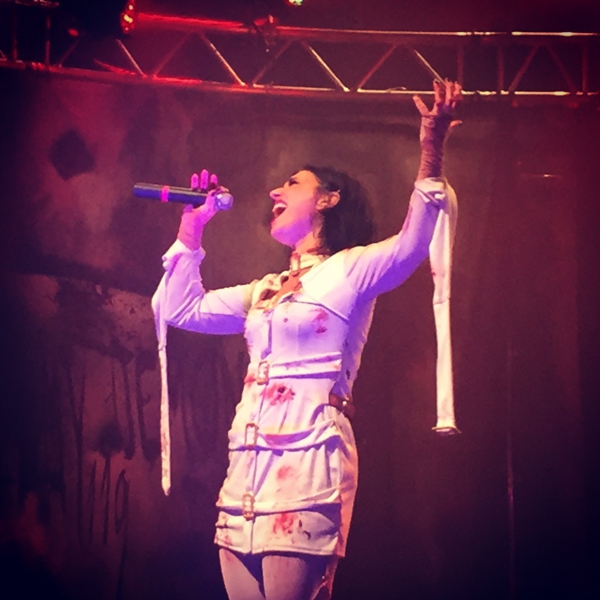 What can I say? I was blown away by this show. Lacuna Coil is a heavily referenced act in the Metal world and their reputation is totally deserved. Led by such a talented singer, Scabbia and her friends offered us an evening we won't forget. Everything had been perfect; the set-list that covered several albums and the last one in particular, the stage effects, the proximity with the audience, the venue itself. I would not have changed anything from this evening and I will definitely come back next time, without a second of hesitation.

The band will celebrate their 20th anniversary next January which includes a very special show in London as well as the release of a book – as they have claimed in the with the aforementioned song... 'Nothing Stands In Our Way' and that's really good for all of us!

Review and photos by Julien Marbaix